Abraham Lincoln was one of America’s most celebrated politicians. He was the 16th president of the United States and is still considered to be one of history’s most notable men.

Born in February 1809 into a humble family, he got from being a shopkeeper to becoming a self-educated lawyer, legislator, Congressman, and eventually holding the highest office in the country. During his lifetime, he actively fought for equal rights, democracy, and liberty.

Lincoln led the nation through the American Civil War and aimed for a government that was “of the people, by the people, for the people.” Aside from being widely known for his role in the abolishment of slavery and modernization of the US economy, his most enduring legacy is the values he left behind.

From an exceptional man of notable achievements, here are the top 103 Abraham Lincoln quotes and sayings that will inspire you to become a better person.

1. “The things I want to know are in books; my best friend is the man who’ll get me a book I ain’t read.”

2. “No man has a good enough memory to be a successful liar.”

4. “It has been my experience that folks who have no vices have very few virtues.”

5. “No man is good enough to govern another man without the other’s consent.” 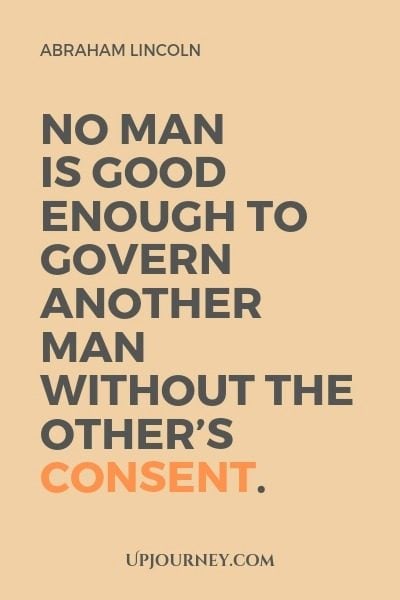 6. “The best way to destroy an enemy is to make him a friend.”

7. “Am I not destroying my enemies when I make friends of them?”

8. “The time comes upon every public man when it is best for him to keep his lips closed.”

9. “At what point then is the approach of danger to be expected? I answer, if it ever reach us, it must spring up amongst us. It cannot come from abroad. If destruction be our lot, we must ourselves be its author and finisher. As a nation of freemen, we must live through all time, or die by suicide.”

10. “All my life I have tried to pluck a thistle and plant a flower wherever the flower would grow in thought and mind.”

11. “I remember my mother’s prayers and they have always followed me. They have clung to me all my life.” 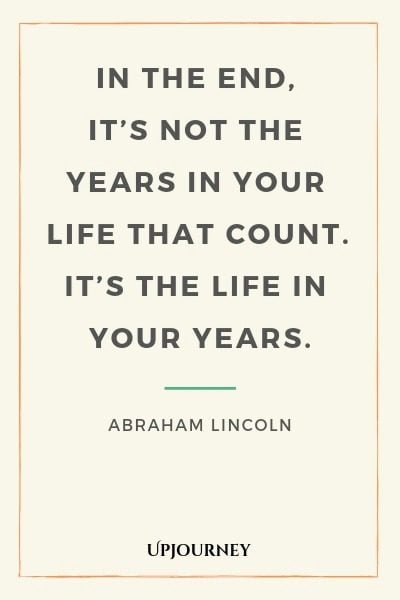 13. “There is another old poet whose name I do not now remember who said, “Truth is the daughter of Time.”

15. “When I am getting ready to reason with a man, I spend one-third of my time thinking about myself and what I am going to say and two-thirds about him and what he is going to say.”

16. “I desire so to conduct the affairs of this administration that if at the end… I have lost every other friend on earth, I shall at least have one friend left, and that friend shall be down inside of me.”

18. “I destroy my enemies when I make them my friends.”

1. “America will never be destroyed from the outside. If we falter and lose our freedoms, it will be because we destroyed ourselves.”

2. “Whenever I hear anyone arguing for slavery, I feel a strong impulse to see it tried on him personally.”

3. “Be sure you put your feet in the right place, then stand firm.” 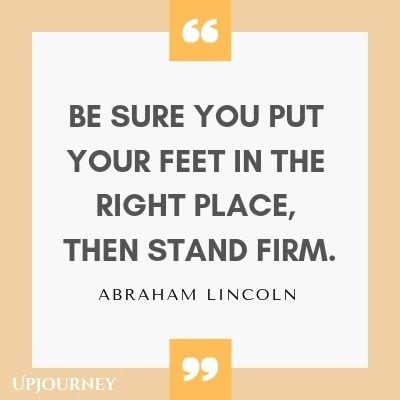 4. “I have always found that mercy bears richer fruits than strict justice.”

5. “The ballot is stronger than the bullet.”

8. “Discourage litigation. Persuade your neighbors to compromise whenever you can. As a peacemaker, the lawyer has superior opportunity of being a good man. There will still be business enough.”

9. “Don’t interfere with anything in the Constitution. That must be maintained, for it is the only safeguard of our liberties.”

10. “I am a firm believer in the people. If given the truth, they can be depended upon to meet any national crisis. The great point is to bring them the real facts.”

11. “I never had a policy; I have just tried to do my very best each and every day.” 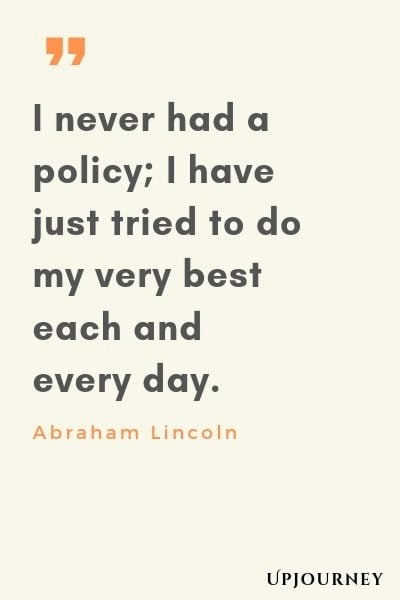 12. “Republicans are for both the man and the dollar, but in case of conflict the man before the dollar.”

13. “Ballots are the rightful and peaceful successors to bullets.”

1. “In giving freedom to the slave, we assure freedom to the free – honorable alike in what we give and what we preserve. We shall nobly save, or meanly lose, the last best hope of earth.”

2. “Every man is said to have his peculiar ambition. Whether it be true or not, I can say for one that I have no other so great as that of being truly esteemed of my fellow men, by rendering myself worthy of their esteem.”

3. “Common looking people are the best in the world: that is the reason the Lord makes so many of them.”

4. “When you have got an elephant by the hind legs and he is trying to run away, it’s best to let him run.”

6. “Always bear in mind that your own resolution to succeed is more important than any other.”

7. “It is rather for us here dedicated to the great task remaining before us, that from these honored dead we take increased devotion to that cause for which they gave the last full measure of devotion.”

8. “Let not him who is houseless pull down the house of another, but let him work diligently and build one for himself, thus by example assuring that his own shall be safe from violence when built.”

9. “The best thing about the future is that it comes one day at a time.” 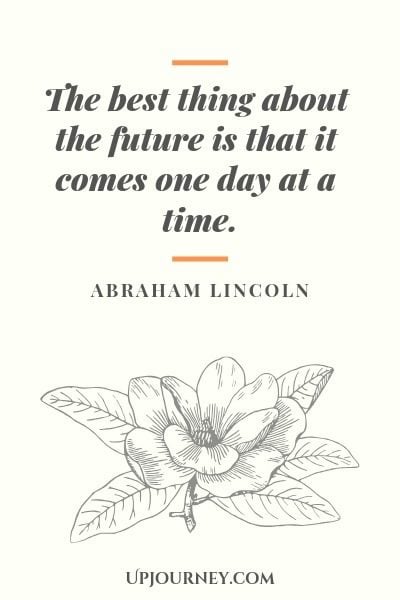 10. “The best way to get a bad law repealed is to enforce it strictly.”

11. “My dream is of a place and a time where America will once again be seen as the last best hope of earth.”

12. “I want it said of me by those who knew me best, that I always plucked a thistle and planted a flower where I thought a flower would grow.”

13. “That some achieve great success, is proof to all that others can achieve it as well.”

1. “The dogmas of the quiet past are inadequate to the stormy present. The occasion is piled high with difficulty, and we must rise with the occasion. As our case is new, so we must think anew and act anew.”

2. “I care not much for a man’s religion whose dog and cat are not the better for it.”

3. “I can make more generals, but horses cost money.”

4. “Never stir up litigation. A worse man can scarcely be found than one who does this.”

5. “If we could first know where we are, and whether we are tending, we could then better judge what to do, and how to do it.”

6. “Knavery and flattery are blood relations.” 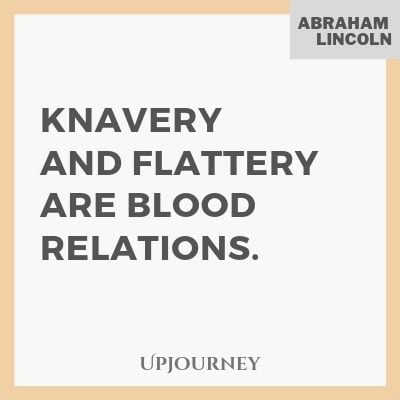 7. “Our defense is in the preservation of the spirit which prizes liberty as a heritage of all men, in all lands, everywhere. Destroy this spirit and you have planted the seeds of despotism around your own doors.”

8. “To sin by silence when they should protest makes cowards of men.”

9. “With the fearful strain that is on me night and day, if I did not laugh I should die.”

11. “Let’s have faith that right makes might and in that faith let us, to the end, dare to do our duty as we understand it.”

12. “Most folks are as happy as they make up their minds to be.”

13. “The way for a young man to rise is to improve himself in every way he can, never suspecting that anybody wishes to hinder him.”

15. “With Malice toward none, with charity for all, with firmness in the right, as God gives us to see the right, let us strive on to finish the work we are in, to bind up the nation’s wounds.”

16. “There is nothing true anywhere, The true is nowhere to be seen; If you say you see the true, This seeing is not the true one.”

17. “Sir, my concern is not whether God is on our side my greatest concern is to be on God’s side, for God is always right.”

18. “The probability that we may fail in the struggle ought not to deter us from the support of a cause we believe to be just.” 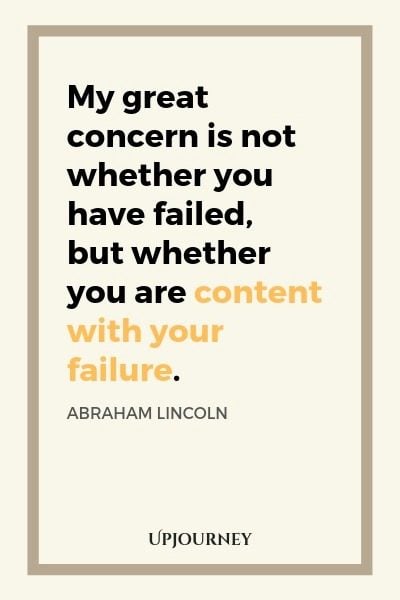 20. “It is better to remain silent and be thought a fool than to open one’s mouth and remove all doubt.”

21. “These capitalists generally act harmoniously and in concert, to fleece the people.”

22. “Nearly all men can stand adversity, but if you want to test a man’s character, give him power.”

23. “Those who deny freedom to others deserve it not for themselves.” 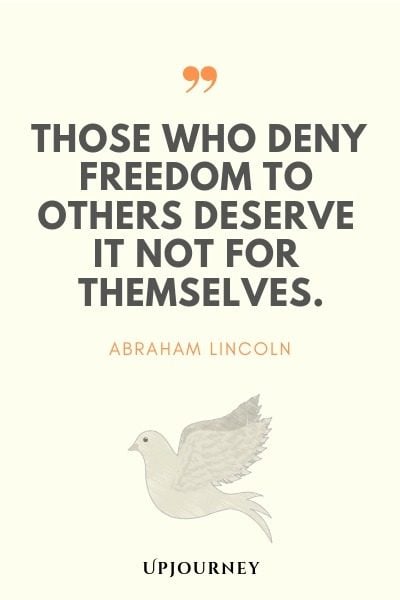 25. “Avoid popularity if you would have peace.”

26. “The Lord prefers common-looking people. That is why he makes so many of them.”

27. “If once you forfeit the confidence of your fellow-citizens, you can never regain their respect and esteem.”

28. “We should be too big to take offense and too noble to give it.”

29. “If I were to try to read, much less answer, all the attacks made on me, this shop might as well be closed for any other business.”

30. “Things may come to those who wait, but only the things left by those who hustle.”

32. “Marriage is neither heaven nor hell, it is simply purgatory.”

33. “Surely God would not have created such a being as man, with an ability to grasp the infinite, to exist only for a day! No, no, man was made for immortality.”

34. “In great contests, each party claims to act in accordance with the will of God. Both may be, and one must be wrong.”

35. “No matter how much cats fight, there always seem to be plenty of kittens.”

38. “The highest art is always the most religious, and the greatest artist is always a devout person.”

40. “These men ask for just the same thing, fairness, and fairness only. This, so far as in my power, they, and all others shall have.” 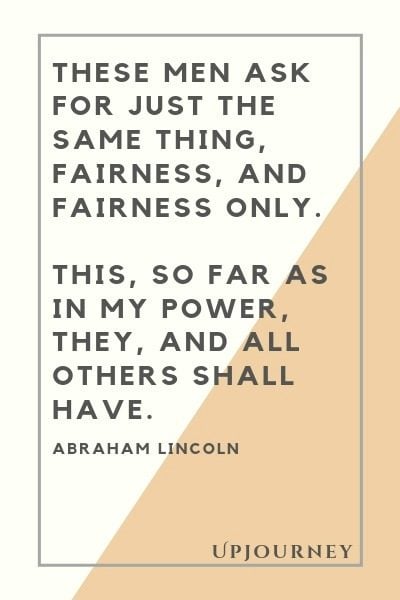 41. “The shepherd drives the wolf from the sheep’s for which the sheep thanks the shepherd as his liberator, while the wolf denounces him for the same act as the destroyer of liberty. Plainly, the sheep and the wolf are not agreed upon a definition of liberty.”

42. “I hope to stand firm enough to not go backward, and yet not go forward fast enough to wreck the country’s cause.”

44. “The assertion that ‘all men are created equal’ was of no practical use in effecting our separation from Great Britain and it was placed in the Declaration not for that, but for future use.”

45. “You cannot build character and courage by taking away a man’s initiative and independence.” 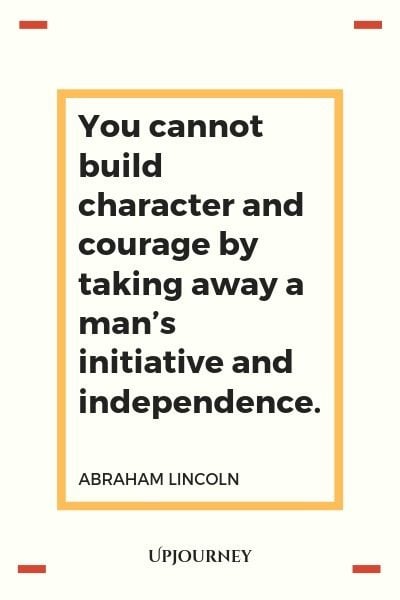 46. “You have to do your own growing no matter how tall your grandfather was.”

47. “If I had eight hours to chop down a tree, I’d spend six hours sharpening my ax.”

48. “People are just as happy as they make up their minds to be.”

49. “I will prepare and some day my chance will come.”

51. “Stand with anybody that stands right, stand with him while he is right and part with him when he goes wrong.”

52. “Character is like a tree and reputation like a shadow. The shadow is what we think of it; the tree is the real thing.”

53. “Books serve to show a man that those original thoughts of his aren’t very new at all.”

54. “Everybody likes a compliment.” 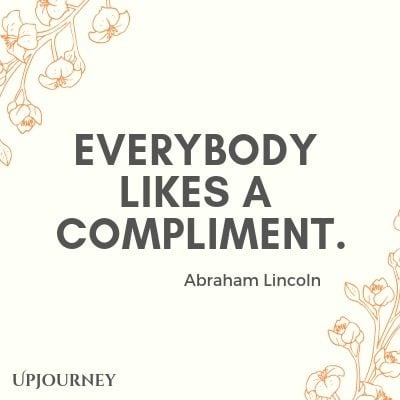 55. “Everyone desires to live long, but no one would be old.”

56. “Die when I may, I want it said by those who knew me best that I always plucked a thistle and planted a flower where I thought a flower would grow.”

57. “Don’t worry when you are not recognized, but strive to be worthy of recognition.”

If you’d like to know more about Abraham Lincoln and his political endeavors, we would suggest you read, Team of Rivals: The Political Genius of Abraham Lincoln by Doris Kearns Goodwin.