Famously known as the most feared American gangsters of all-time, Alphonse Gabriel Capone, sometimes called by the nickname “Scarface,” was a businessman and gangster who achieved reputation during the Prohibition era.

He was also the boss and co-founder of the Chicago Outfit—an Italian-American organized crime syndicate based in Chicago, Illinois. Unlike other infamous criminals, Scarface did not operate under stealth. On the contrary, Al Capone reveled in the attention, particularly during his frequent appearances at ball games.

Many also viewed him as the “modern-day Robin Hood,” but it all came to an end after the Saint Valentine’s Day Massacre in which seven gang rivals were killed in broad daylight. This happening destroyed Capone’s and Chicago’s image, leading prominent citizens to demand government action to dub Al Capone as “Public Enemy No. 1.”

The authorities became very determined on imprisoning Capone, and so they eventually prosecuted him in 1931 for income tax evasion and sentenced him for 11 years in Federal prison. On the 25th of January 1947, Al Capone died due to cardiac arrest after suffering a stroke.

Here are some of the top Al Capone quotes and sayings that explore his thoughts and views about capitalism, America, and more.

2. “This American system of ours, call it Americanism, call it capitalism, call it what you will, gives each and every one of us a great opportunity if we only seize it with both hands and make the most of it.” 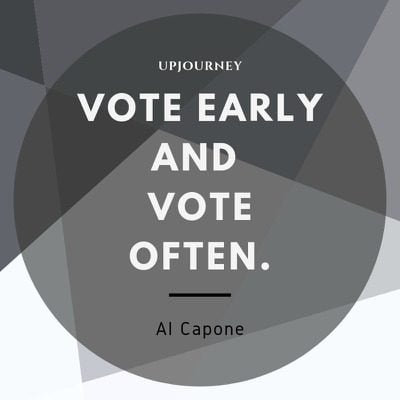 4. “Capitalism is the legitimate racket of the ruling class.”

6. “My rackets are run on strictly American lines and they’re going to stay that way.”

7. “I have built my organization upon fear.”

10. “Prohibition has made nothing but trouble.” 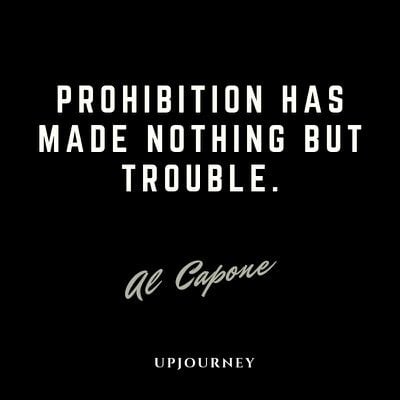 11. “When I sell liquor, it’s called bootlegging; when my patrons serve it on Lake Shore Drive, it’s called hospitality.”

If you would like to learn more about the life of Al Capone, we would suggest you read Al Capone: His Life, Legacy, and Legend by Deirdre Bair.