Turing was also an essential member of code-breakers in “Government Code and Cyber School” (GC&CS), which is Britain’s codebreaking center. He also led a section in GC&CS that was responsible for German naval cryptanalysis.

He played a crucial role in deciphering intercepted coded messages that allowed the Allies to defeat the Nazis in various critical engagements, by designing a number of techniques for expediting the breaking of German ciphers.

Here’s a compilation of some of the most notable quotes and sayings by the distinguished mathematician and brilliant code-breaker.

1. “I believe that at the end of the century the use of words and general educated opinion will have altered so much that one will be able to speak of machines thinking without expecting to be contradicted.”

2. “The idea behind digital computers may be explained by saying that these machines are intended to carry out any operations which could be done by a human computer.”

3. “We can only see a short distance ahead, but we can see plenty there that needs to be done.” 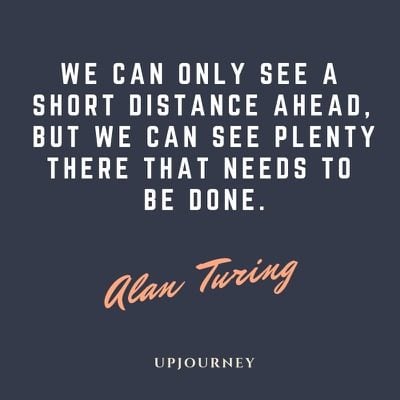 4. “Science is a differential equation. Religion is a boundary condition.”

5. “I want a permanent relationship, and I might feel inclined to reject anything which of its nature could not be permanent.”

6. “We are not interested in the fact that the brain has the consistency of cold porridge.”

7. “Machines take me by surprise with great frequency.”

8. “A computer would deserve to be called intelligent if it could deceive a human into believing that it was human.”

9. “I have such a stressful job that the only way I can get it out of my mind is by running hard.”

10. “No, I’m not interested in developing a powerful brain. All I’m after is just a mediocre brain, something like the President of the American Telephone and Telegraph Company.”

11. “Mathematical reasoning may be regarded rather schematically as the exercise of a combination of two facilities, which we may call intuition and ingenuity.” 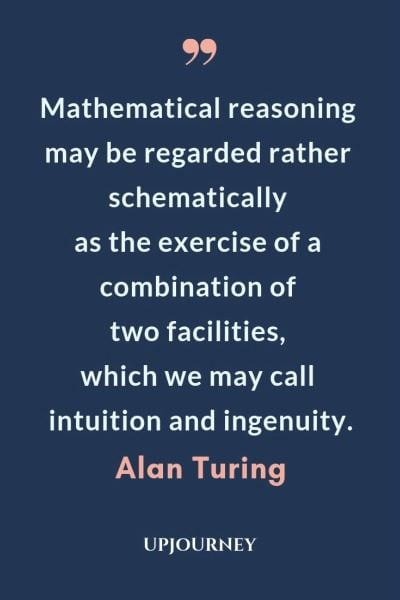 12. “I have had a dream indicating rather clearly that I am on the way to being hetero, though I don’t accept it with much enthusiasm either awake or in the dreams.”

If you’d like to know more about the life and works of Alan Mathison Turing, we would suggest you read The Annotated Turing: A Guided Tour Through Alan Turing’s Historic Paper on Computability and the Turing Machine by Charles Petzold.