British philosopher Alan Watts was known as the man who popularized Eastern philosophy, such as Zen, to the Western people. He is one of the prominent figures in Contemporary Philosophy and has published more than 20 books.

In 1915, Watts was born in a village in Kent. With his natural curiosity and imaginative mind, Watts developed an interest in Buddhism and soon had to choose between Anglican Christianity and Buddhism. He chose the latter, and at the age of 23, Watts moved to the United States where he had his Zen training in New York.

Throughout his adult life, Watts became an Episcopal priest but then left the ministry soon after. He moved to the West Coast in California and became a faculty in the American Academy of Asian Studies. Watts was also married three times. To this day, two of his daughters, Joan and Anne, and his son, Mark, manage the copyrights of his books and other published contents.

We have collected some of the most riveting Alan Watts quotes that will make you ponder about life, love, God, and many more.

1. “To have faith is to trust yourself to the water. When you swim you don’t grab hold of the water, because if you do you will sink and drown. Instead you relax, and float.”

2. “Religion is not a department of life; it is something that enters into the whole of it.” 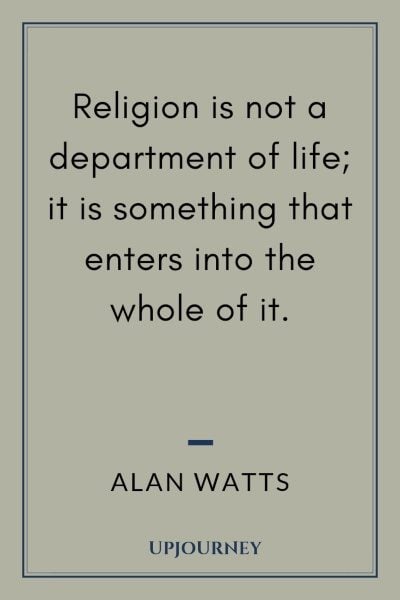 3. “But I’ll tell you what hermits realize. If you go off into a far, far forest and get very quiet, you’ll come to understand that you’re connected with everything.”

4. “No work or love will flourish out of guilt, fear, or hollowness of heart, just as no valid plans for the future can be made by those who have no capacity for living now.”

5. “But we try to pretend, you see, that the external world exists altogether independently of us.”

6. “No valid plans for the future can be made by those who have no capacity for living now.”

8. “We identify in our experience a differentiation between what we do and what happens to us.”

9. “The reason we want to go on and on is because we live in an impoverished present.”

10. “What the devil is the point of surviving, going on living, when it’s a drag? But you see, that’s what people do.”

12. “The only way to make sense out of change is to plunge into it, move with it, and join the dance.” 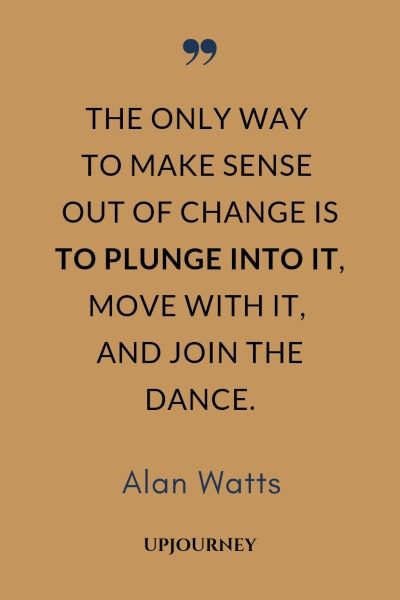 1. “The religious idea of God cannot do full duty for the metaphysical infinity.”

2. “In other words, a person who is fanatic in matters of religion, and clings to certain ideas about the nature of God and the universe, becomes a person who has no faith at all.”

3. “The difficulty for most of us in the modern world is that the old-fashioned idea of God has become incredible or implausible.” 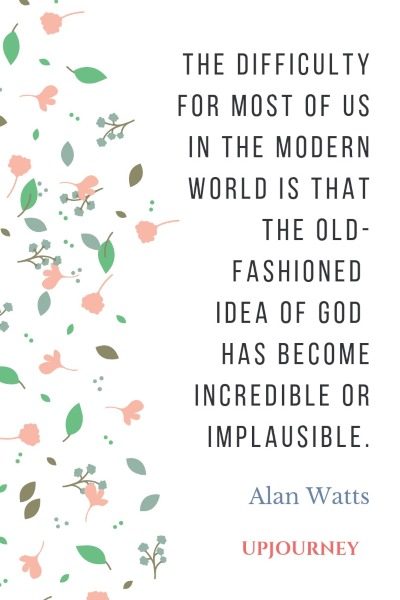 4. “Zen does not confuse spirituality with thinking about God while one is peeling potatoes. Zen spirituality is just to peel the potatoes.”

5. “How is it possible that a being with such sensitive jewels as the eyes, such enchanted musical instruments as the ears, and such fabulous arabesque of nerves as the brain can experience itself anything less than a god.”

6. “The style of God venerated in the church, mosque, or synagogue seems completely different from the style of the natural universe.”

7. “You don’t look out there for God, something in the sky, you look in you.”

Alan Watts Quotes on Love and Many More

1. “Never pretend to a love which you do not actually feel, for love is not ours to command.” 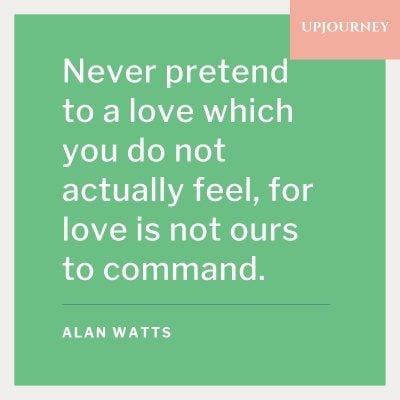 2. “The myths underlying our culture and underlying our common sense have not taught us to feel identical with the universe, but only parts of it, only in it, only confronting it – aliens.”

3. “So then, the relationship of self to other is the complete realization that loving yourself is impossible without loving everything defined as other than yourself.”

4. “And although our bodies are bounded with skin, and we can differentiate between outside and inside, they cannot exist except in a certain kind of natural environment.”

5. “If you study the writings of the mystics, you will always find things in them that appear to be paradoxes, as in Zen, particularly.”

7. “In known history, nobody has had such capacity for altering the universe than the people of the United States of America. And nobody has gone about it in such an aggressive way.”

8. “The ego is nothing other than the focus of conscious attention.”

9. “But to me nothing – the negative, the empty – is exceedingly powerful.”

10. “But at any rate, the point is that God is what nobody admits to being, and everybody really is.”

11. “Wars based on principle are far more destructive… the attacker will not destroy that which he is after.”

12. “But the attitude of faith is to let go, and become open to truth, whatever it might turn out to be.”

13. “Trying to define yourself is like trying to bite your own teeth.” 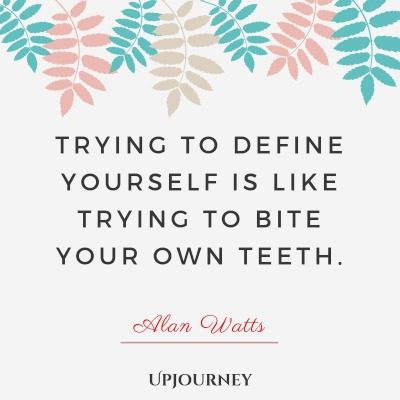 15. “Omnipotence is not knowing how everything is done; it’s just doing it.”

16. “Some believe all that parents, tutors, and kindred believe. They take their principles by inheritance, and defend them as they would their estates, because they are born heirs to them.”

17. “And the attitude of faith is the very opposite of clinging to belief, of holding on.”

18. “Buddhism has in it no idea of there being a moral law laid down by some kind of cosmic lawgiver.”

20. “So the bodhisattva saves all beings, not by preaching sermons to them, but by showing them that they are delivered, they are liberated, by the act of not being able to stop changing.”

21. “You are that vast thing that you see far, far off with great telescopes.” 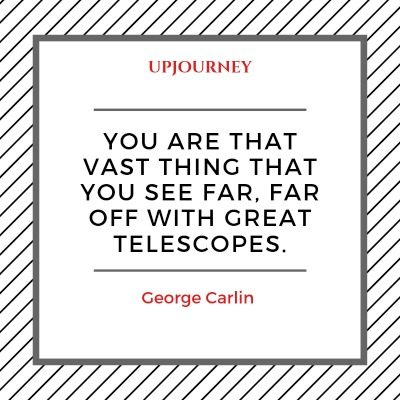 22. “So what is discord at one level of your being is harmony at another level.”

23. “The moralist is the person who tells people that they ought to be unselfish, when they still feel like egos, and his efforts are always and invariably futile.”

25. “Things are as they are. Looking out into it the universe at night, we make no comparisons between right and wrong stars, nor between well and badly arranged constellations.”

26. “A myth is an image in terms of which we try to make sense of the world.”

27. “I have realized that the past and future are real illusions, that they exist in the present, which is what there is and all there is.”

28. “Technology is destructive only in the hands of people who do not realize that they are one and the same process as the universe.”

If you’d like to know and read more of Alan Watts’ works, we recommend you read The Book, The Way of Zen, and The Wisdom of Insecurity.