Albert Einstein is an influential German-born theoretical physicist and might be the most famous scientist to have ever lived.

His works are substantially known for its impact on the philosophy of science. While Einstein is best known for his mass-energy equivalence formula E = mc2, which has been dubbed as “the world’s most famous equation,” he also developed the ground-breaking theory of relativity which is one of the two pillars of modern physics. Aside from that, he also received the 1921 Nobel Prize in Physics for his discovery of the law of the photoelectric effect which was a crucial step in the advancement of quantum theory.

It’s no doubt that Einstein had a talent for mathematics and physics from an early age. At age 12, he taught himself algebra and Euclidean geometry over a single summer. His profound passion for mathematics led him to become convinced that nature could be understood as a “mathematical structure.”

However, he did not always excel at everything. During his elementary years, he experienced speech challenges. Einstein also clashed with authorities and later wrote that the spirit of learning and creative thinking was lost due to the school’s stern teaching methods.

Throughout his life, Einstein wrote and published more than 150 non-scientific works and more than 300 scientific papers. In fact, his intellectual attainments and innovation have made the word “Einstein” synonymous to being a “genius.”

Albert Einstein is an exceptional icon, whose wisdom and understanding stretched far beyond the realm of physics. He was a man with a spirit of curiosity, a deep appreciation for music, and a profound love for humanity.

Here are the top 100 Albert Einstein quotes that will show you why he is history’s most beloved genius.

1. “Education is what remains after one has forgotten what one has learned in school.”

2. “Reading, after a certain age, diverts the mind too much from its creative pursuits.”

3. “Any man who reads too much and uses his own brain too little falls into lazy habits of thinking.”

4. “The only thing that interferes with my learning is my education.”

5. “I have no special talent. I am only passionately curious.” 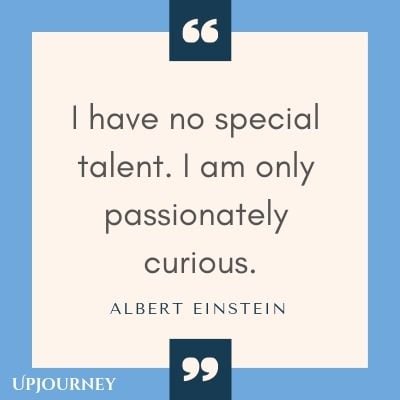 6. “It is a miracle that curiosity survives formal education.”

7. “Intellectual growth should commence at birth and cease only at death.”

1. “To raise new questions, new possibilities, to regard old problems from a new angle, requires creative imagination and marks real advance in science.”

2. “Most of the fundamental ideas of science are essentially simple, and may, as a rule, be expressed in a language comprehensible to everyone.”

3. “It stands to the everlasting credit of science that by acting on the human mind it has overcome man’s insecurity before himself and before nature.”

4. “The whole of science is nothing more than a refinement of everyday thinking.”

5. “Science is a wonderful thing if one does not have to earn one’s living at it.”

6. “The grand aim of all science is to cover the greatest number of empirical facts by logical deduction from the smallest number of hypotheses or axioms.”

7. “The most beautiful thing we can experience is the mysterious. It is the source of all true art and science.” 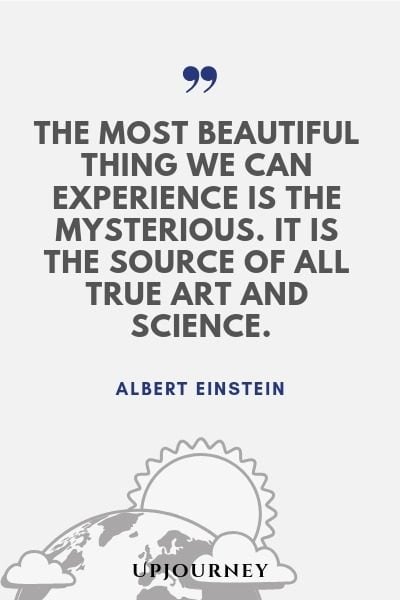 8. “The man of science is a poor philosopher.”

9. “Only two things are infinite, the universe and human stupidity, and I’m not sure about the former.”

10. “No amount of experimentation can ever prove me right a single experiment can prove me wrong.”

11. “Science without religion is lame, religion without science is blind.”

1. “The only source of knowledge is experience.”

2. “The gift of fantasy has meant more to me than my talent for absorbing positive knowledge.”

3. “He who joyfully marches to music in rank and file has already earned my contempt.”

4. “He has been given a large brain by mistake, since for him the spinal cord would suffice.”

5. “Knowledge of what is does not open the door directly to what should be.”

6. “The true sign of intelligence is not knowledge but imagination.” 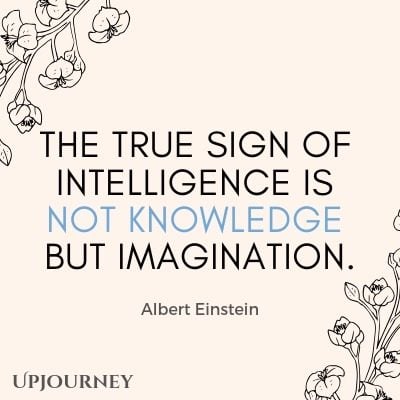 7. “Information is not knowledge.”

9. “Imagination is more important than knowledge.”

10. “The difference between stupidity and genius is that genius has its limits.”

11. “It is the supreme art of the teacher to awaken joy in creative expression and knowledge.”

12. “There comes a time when the mind takes a higher plane of knowledge but can never prove how it got there.” 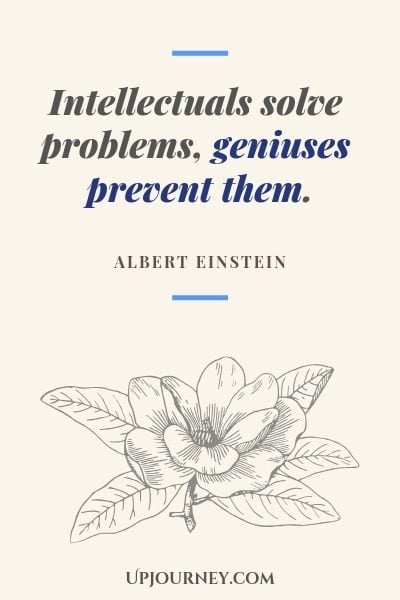 14. “Whoever undertakes to set himself up as a judge of Truth and Knowledge is shipwrecked by the laughter of the gods.”

15. “We should take care not to make the intellect our god it has, of course, powerful muscles, but no personality.”

2. “The attempt to combine wisdom and power has only rarely been successful and then only for a short while.” 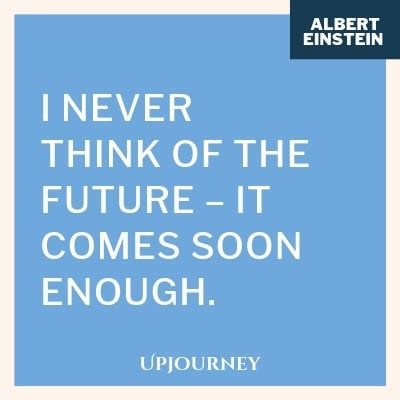 4. “You ask me if I keep a notebook to record my great ideas. I’ve only ever had one.”

5. “Most people say that it is the intellect which makes a great scientist. They are wrong: it is character.”

6. “It gives me great pleasure indeed to see the stubbornness of an incorrigible nonconformist warmly acclaimed.”

7. “Only one who devotes himself to a cause with his whole strength and soul can be a true master. For this reason, mastery demands all of a person.”

8. “The distinction between the past, present, and future is only a stubbornly persistent illusion.”

1. “Life is like riding a bicycle. To keep your balance, you must keep moving.”

2. “The monotony and solitude of a quiet life stimulates the creative mind.”

3. “I believe that a simple and unassuming manner of life is best for everyone, best both for the body and the mind.”

4. “Imagination is everything. It is the preview of life’s coming attractions.”

5. “I want to go when I want. It is tasteless to prolong life artificially. I have done my share; it is time to go. I will do it elegantly.”

6. “Without deep reflection, one knows from daily life that one exists for other people.”

8. “If I were not a physicist, I would probably be a musician. I often think in music. I live my daydreams in music. I see my life in terms of music.”

9. “Only a life lived for others is a life worthwhile.” 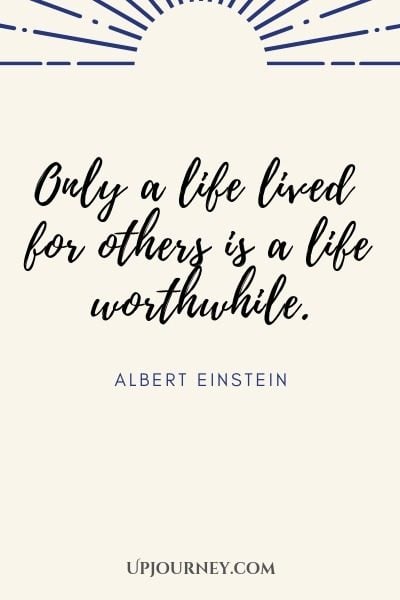 1. “The hardest thing to understand in the world is the income tax.”

2. “Nothing is more destructive of respect for the government and the law of the land than passing laws which cannot be enforced.”

4. “Morality is of the highest importance – but for us, not for God.”

5. “The only reason for time is so that everything doesn’t happen at once.” 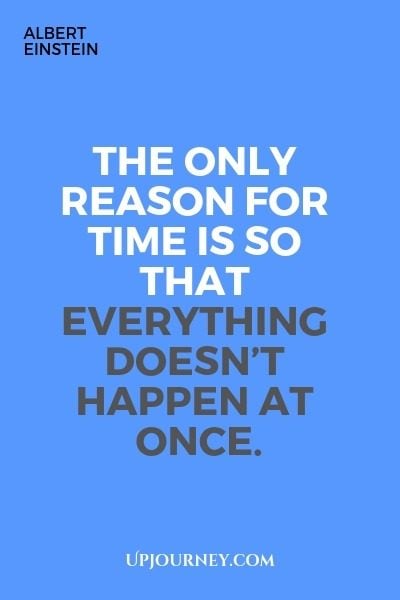 6. “That deep emotional conviction of the presence of a superior reasoning power, which is revealed in the incomprehensible universe, forms my idea of God.”

7. “I am enough of an artist to draw freely upon my imagination.”

8. “I cannot imagine a God who rewards and punishes the objects of his creation and is but a reflection of human frailty.”

9. “I do not believe in the God of theology who rewards good and punishes evil.”

10. “I shall never believe that God plays dice with the world.”

12. “Whoever is careless with the truth in small matters cannot be trusted with important matters.”

14. “Perfection of means and confusion of ends seem to characterize our age.”

15. “When the solution is simple, God is answering.”

16. “The pursuit of truth and beauty is a sphere of activity in which we are permitted to remain, children, all our lives.” 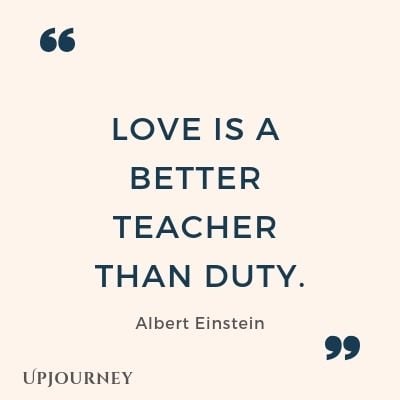 18. “Learn from yesterday, live for today, hope for tomorrow. The important thing is not to stop questioning.”

19. “It is my conviction that killing under the cloak of war is nothing but an act of murder.”

20. “If people are good only because they fear punishment, and hope for reward, then we are a sorry lot indeed.”

21. “You can’t blame gravity for falling in love.”

22. “Anyone who doesn’t take truth seriously in small matters cannot be trusted in large ones either.”

23. “Before God, we are all equally wise – and equally foolish.”

24. “I do not believe that civilization will be wiped out in a war fought with the atomic bomb. Perhaps two-thirds of the people of the earth will be killed.”

25. “One strength of the communist system of the East is that it has some of the character of a religion and inspires the emotions of a religion.”

26. “When you are courting a nice girl an hour seems like a second. When you sit on a red-hot cinder a second seems like an hour. That’s relativity.”

28. “We still do not know one-thousandth of one percent of what nature has revealed to us.” 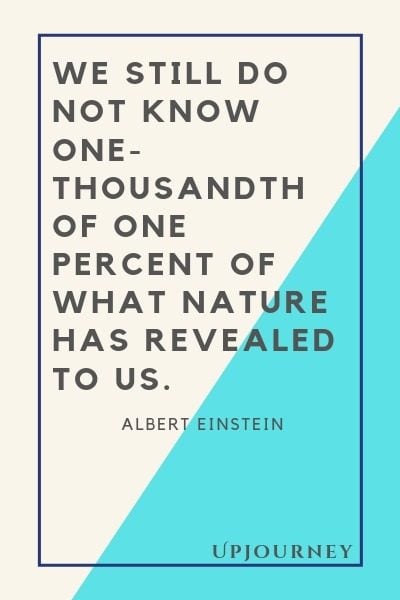 29. “The fear of death is the most unjustified of all fears, for there’s no risk of accident for someone who’s dead.”

30. “The environment is everything that isn’t me.”

31. “It was the experience of mystery – even if mixed with fear – that engendered religion.”

32. “The unleashed power of the atom has changed everything save our modes of thinking and we thus drift toward unparalleled catastrophe.”

33. “All that is valuable in human society depends upon the opportunity for development accorded the individual.”

34. “Our task must be to free ourselves by widening our circle of compassion to embrace all living creatures and the whole of nature and its beauty.”

35. “I think and think for months and years. Ninety-nine times, the conclusion is false. The hundredth time I am right.”

36. “He who joyfully marches to music in rank and file has already earned my contempt. He has been given a large brain by mistake, since for him the spinal cord would suffice.”

37. “If you are out to describe the truth, leave elegance to the tailor.”

38. “Nationalism is an infantile disease. It is the measles of mankind.”

39. “True art is characterized by an irresistible urge in the creative artist.”

40. “Everyone should be respected as an individual, but no one idolized.” 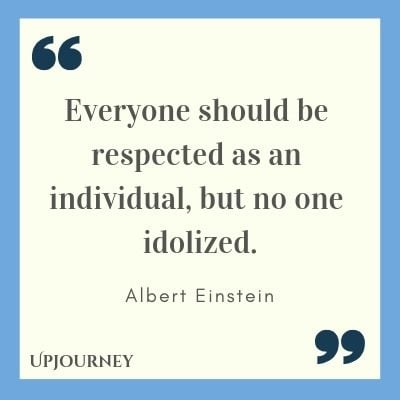 41. “Time is what prevents everything from happening at once.”

42. “It is strange to be known so universally and yet to be so lonely.”

43. “If we knew what it was we were doing, it would not be called research, would it?”

44. “I am not only a pacifist but a militant pacifist. I am willing to fight for peace. Nothing will end war unless the people themselves refuse to go to war.”

45. “Politics is for the present, but an equation is for eternity.”

47. “Logic will get you from A to B. Imagination will take you everywhere.” 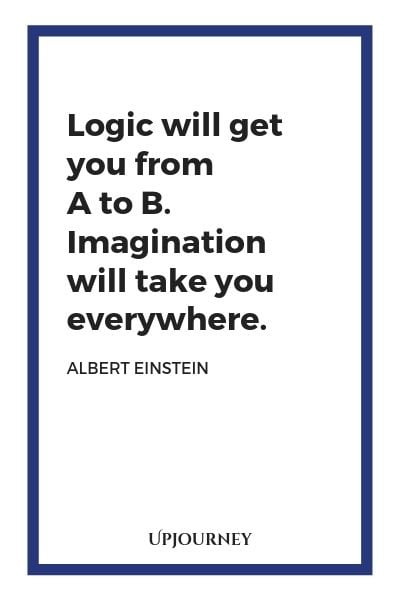 48. “Joy in looking and comprehending is nature’s most beautiful gift.”

50. “Confusion of goals and perfection of means seems, in my opinion, to characterize our age.”

If you want to know more about Albert Einstein’s life and works, we would suggest you read Einstein: His Life and Universe to discover why he’s considered a world-renowned genius.