Alexander Hamilton was an American statesman, a prominent attorney, and one of the Founding Fathers of the United States. He was also an influential promoter of the U.S. Constitution where he wrote various essays which influenced and convinced the people to follow the constitution.

Aside from that, Hamilton also founded the U.S. Coast Guard, the Federalist Party, the nation’s financial system, and the New York Post newspaper. He was also actively involved in political and public matters and was one of the most trusted advisors for the executive class.

He further went on to become the first U.S. Secretary of the Treasury and was the primary author of the economic policies under George Washington’s administration. Hamilton’s vision included a stable central government led by a vigorous executive branch, a national bank, a substantial commercial economy, as well as an active military.

Hamilton resumed his business and legal activities in New York City and was active in terminating the legality of the international slave trade. In the 12th of July, 1804, Hamilton died after being shot and wounded by Vice President Aaron Burr.

Here are the most notable Alexander Hamilton quotes and sayings that reveal his thoughts and views about life, humanity, the government, and many more.

1. “Constitutions should consist only of general provisions; the reason is that they must necessarily be permanent and that they cannot calculate for the possible change of things.”

2. “In framing a government which is to be administered by men over men the great difficulty lies in this: You must first enable the government to control the governed, and in the next place, oblige it to control itself.”

3. “In politics, as in religion, it is equally absurd to aim at making proselytes by fire and sword. Heresies in either can rarely be cured by persecution.”

4. “Why has government been instituted at all? Because the passions of man will not conform to the dictates of reason and justice without constraint.”

5. “Even to observe neutrality you must have a strong government.” 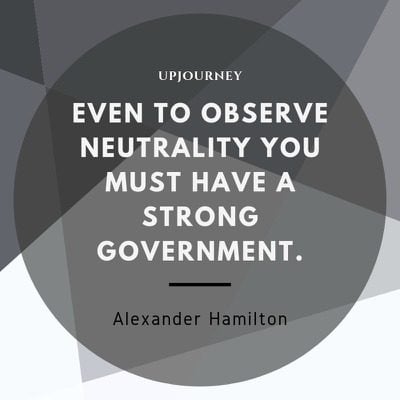 1. “Power over a man’s subsistence is power over his will.”

2. “The sacred rights of mankind are not to be rummaged for among old parchments or musty records. They are written, as with a sunbeam, in the whole volume of human nature, by the hand of the divinity itself; and can never be erased.”

3. “Men often oppose a thing merely because they have had no agency in planning it, or because it may have been planned by those whom they dislike.”

4. “When the sword is once drawn, the passions of men observe no bounds of moderation.”

5. “Man is a reasoning rather than a reasonable animal.” 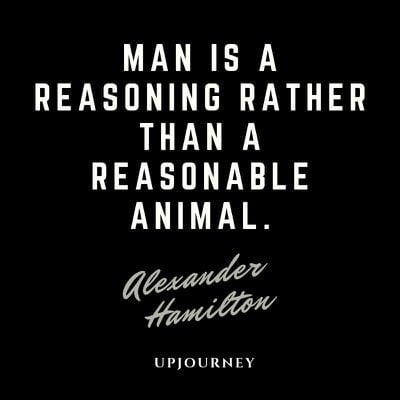 6. “In the general course of human nature, a power over a man’s subsistence amounts to a power over his will.”

1. “It is the advertiser who provides the paper for the subscriber. It is not to be disputed, that the publisher of a newspaper in this country, without very exhaustive advertising support, would receive less reward for his labor than the humblest mechanic.”

2. “Nobody expects to trust his body overmuch after the age of fifty.”

4. “There is a certain enthusiasm in liberty, that makes human nature rise above itself, in acts of bravery and heroism.”

5. “I think the first duty of society is justice.”

7. “Those who stand for nothing fall for anything.” 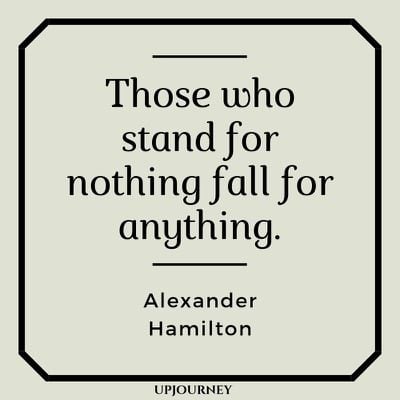 8. “I never expect to see a perfect work from an imperfect man.”

9. “You should not have taken advantage of my sensibility to steal into my affections without my consent.”

10. “Here, sir, the people govern; here they act by their immediate representatives.”

11. “In the usual progress of things, the necessities of a nation in every stage of its existence will be found at least equal to its resources.”

12. “A national debt, if it is not excessive, will be to us a national blessing.”

13. “A well-adjusted person is one who makes the same mistake twice without getting nervous.”

16. “The voice of the people has been said to be the voice of God; and, however generally this maxim has been quoted and believed, it is not true to fact. The people are turbulent and changing, they seldom judge or determine right.”