Alexander III of Macedon, or known to the world as Alexander the Great was a King (basileus) of the ancient Greek kingdom of Macedon.

He succeeded the throne at the age of 20 and spent most of his years as a ruler on a military campaign throughout Northeast Africa and Asia. He was victorious and undefeated in battles and is widely recognized as one of history’s most triumphant military commanders.

By the age of thirty, Alexander has already created one of the mightiest empires of the ancient world, reaching from Greece to northwestern India.

Alexander became legendary and is featured prominently in the history and mythic stories of both Greek and non-Greek cultures. Some believe that to this day, military academies throughout the world still teach his tactics.

Let’s uncover the wisdom, courage, and knowledge of the great Alexander.

Alexander The Great Quotes About War

1. “I wish that the Indians believed me a god, for upon the report of an enemy’s valor oftentimes depends the success of a battle, and false reports have many times done as great things as true courage and resolution.” 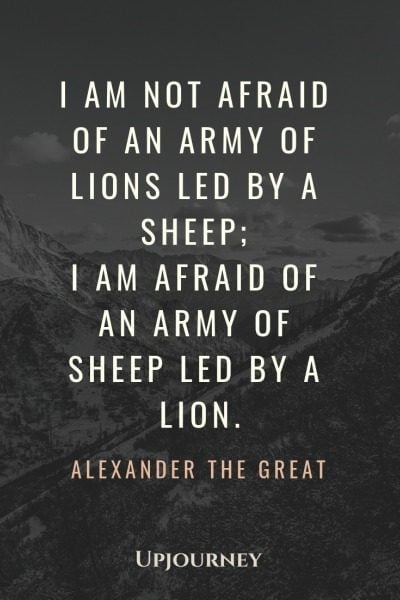 3. “If we turn our backs of the Scythians who have provoked us, how shamefully shall we march against the revolted Bactrians; but if we pass Tanais and make the Scythians feel, by dear experience, that we are invincible, not in Asia only, it is not to be doubted but that Europe itself, as well as Asia, will come within the bounds of our conquests.”

4. “Whatever possession we gain by our sword cannot be sure or lasting, but the love gained by kindness and moderation is certain and durable.”

5. “A tomb now suffices him for whom the whole world was not sufficient.”

7. “Soldiers, I had lately like to have been taken from you by the attempt of a few desperate men, but by the grace and providence of the gods, I am still preserved.”

8. “How happy had it been for me had I been slain in the battle. It had been far more noble to have died the victim of the enemy than fall a sacrifice to the rage of my friends.”

Alexander The Great Quotes About Success

1. “You shall, I question not, find a way to the top if you diligently seek for it; for nature hath placed nothing so high that it is out of the reach of industry and valor.”

2. “Remember upon the conduct of each depends on the fate of all.”

3. “How great are the dangers I face to win a good name in Athens.”

4. “There is nothing impossible to him who will try.” 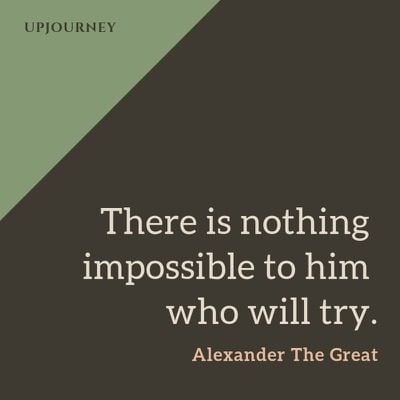 5. “Who does not desire such a victory by which we shall join places in our Kingdom, so far divided by nature, and for which we shall set up trophies in another conquered world?”

Alexander The Great Quotes About Knowledge

1. “For my own part, I would rather excel in the knowledge of the highest secrets of philosophy than in arms.”

4. “I would rather excel others in the knowledge of what is excellent than in the extent of my powers and dominion.” 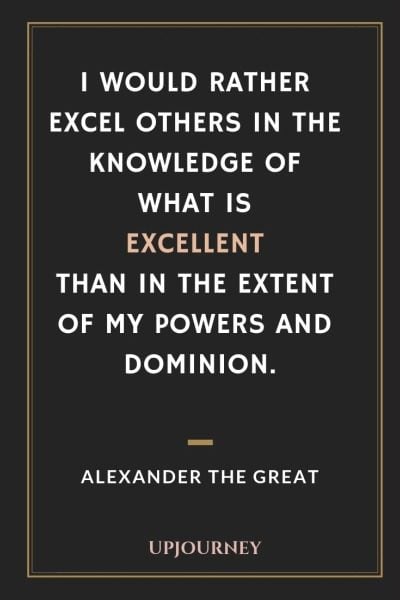 5. “My father will anticipate everything. He will leave you and me no chance to do a great and brilliant deed.”

1. “Shall I, that have destroyed my Preservers, return home?”

2. “How should a man be capable of grooming his own horse, or of furbishing his own spear and helmet, if he allows himself to become unaccustomed to tending even his own person, which is his most treasured belonging?”

3. “So far as I am concerned, I could not be accused of having set eyes, or having wished to set eyes, upon Darius’ wife: on the contrary, I have refused even to listen to those who spoke to me of her beauty.”

4. “His father is governor of Media, and though he has the greatest command given him of all the rest of my generals, he still covetously desires more, and my being without issue spurs him on to this wicked design. But Philotas takes wrong measures.”

5. “I am dying from the treatment of too many physicians.” 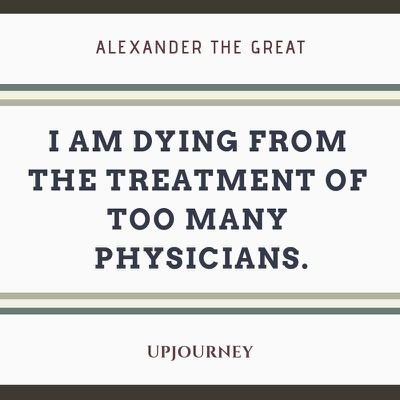 6. “Oh! Most miserable wretch that I am! Why have I not learnt how to swim?”

7. “If I were not Alexander, I would be Diogenes.”

If you would like to know more about the life and adventures of the great conqueror, we would suggest you read Alexander the Great by Philip Freeman.