Anaïs Nin was a writer of French and Cuban descent. Her works span from short stories, novels, essays, and journal collections. She is best known for her journal collections, which she began writing in her adolescence up until her late adult life. Nin is also considered as one of the most excellent female writers of erotica.

Born in 1903, Nin was the daughter of Joaquin and Rosa. She spent her early years in Cuba and Spain, and sixteen years in Paris. Before she turned 40, Nin moved to America, where she became a writer and spent the rest of her life.

Nin had two husbands, Hugh Guiller and Rupert Pole. Though she was also known to have numerous affairs, including Otto Rank and Henry Miller, both of whom influenced her writing. She spent her final years with Pole, despite them being annulled.

Here are some of the best Anaïs Nin quotes and sayings that display her views on writing, love, life, and more.

1. “It is the function of art to renew our perception. What we are familiar with we cease to see. The writer shakes up the familiar scene, and, as if by magic, we see a new meaning in it.” 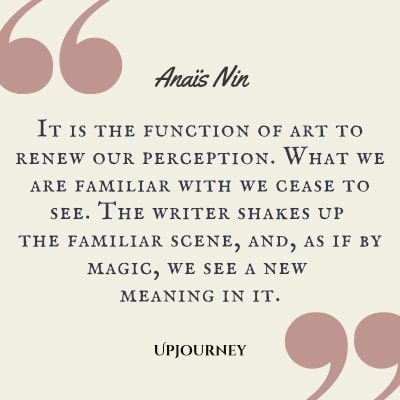 3. “The role of a writer is not to say what we all can say, but what we are unable to say.”

4. “My ideas usually come not at my desk writing but in the midst of living.”

1. “Throw your dreams into space like a kite, and you do not know what it will bring back, a new life, a new friend, a new love, a new country.”

2. “Do not seek the because – in love there is no because, no reason, no explanation, no solutions.”

3. “Age does not protect you from love. But love, to some extent, protects you from age.”

4. “Anxiety is love’s greatest killer. It makes others feel as you might when a drowning man holds on to you. You want to save him, but you know he will strangle you with his panic.”

5. “What I cannot love, I overlook. Is that real friendship?”

6. “I will not be just a tourist in the world of images, just watching images passing by which I cannot live in, make love to, possess as permanent sources of joy and ecstasy.”

7. “Love never dies a natural death. It dies because we don’t know how to replenish it’s source. It dies of blindness and errors and betrayals. It dies of illness and wounds; it dies of weariness, of witherings, of tarnishings.” 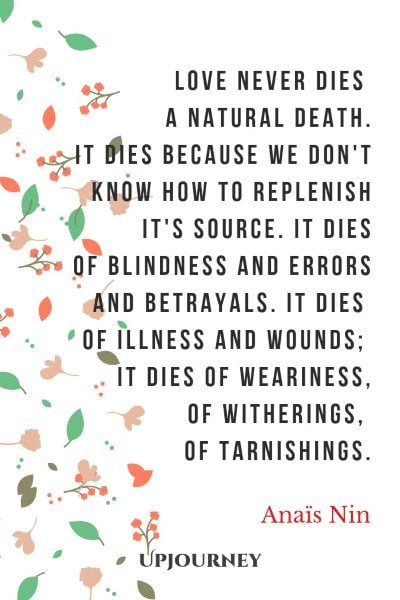 8. “The only abnormality is the incapacity to love.”

1. “Life shrinks or expands in proportion to one’s courage.”

2. “People living deeply have no fear of death.”

4. “Living never wore one out so much as the effort not to live.”

5. “Dreams are necessary to life.”

6. “Life is truly known only to those who suffer, lose, endure adversity and stumble from defeat to defeat.”

7. “The personal life deeply lived always expands into truths beyond itself.”

8. “Life is a process of becoming, a combination of states we have to go through. Where people fail is that they wish to elect a state and remain in it. This is a kind of death.”

9. “Our life is composed greatly from dreams, from the unconscious, and they must be brought into connection with action. They must be woven together.” 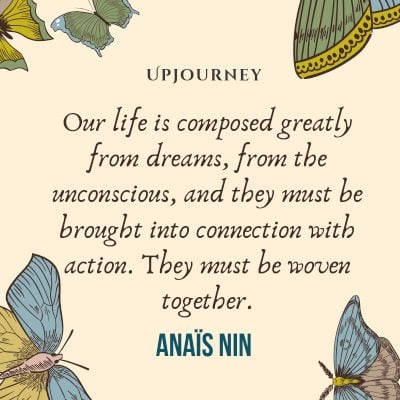 1. “Truth is something which can’t be told in a few words. Those who simplify the universe only reduce the expansion of its meaning.”

2. “I stopped loving my father a long time ago. What remained was the slavery to a pattern.”

3. “There came a time when the risk to remain tight in the bud was more painful than the risk it took to blossom.”

4. “The dream was always running ahead of me. To catch up, to live for a moment in unison with it, that was the miracle.”

6. “Dreams pass into the reality of action. From the actions stems the dream again; and this interdependence produces the highest form of living.”

7. “I postpone death by living, by suffering, by error, by risking, by giving, by losing.”

8. “I, with a deeper instinct, choose a man who compels my strength, who makes enormous demands on me, who does not doubt my courage or my toughness, who does not believe me naive or innocent, who has the courage to treat me like a woman.”

9. “Each contact with a human being is so rare, so precious, one should preserve it.”

10. “The possession of knowledge does not kill the sense of wonder and mystery. There is always more mystery.” 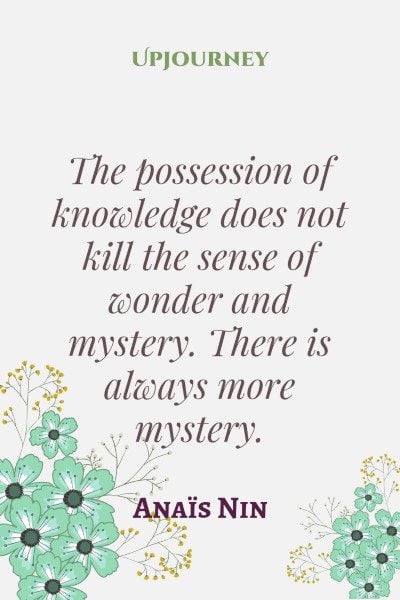 11. “When we blindly adopt a religion, a political system, a literary dogma, we become automatons. We cease to grow.”

13. “Each friend represents a world in us, a world not born until they arrive, and it is only by this meeting that a new world is born.”

14. “We travel, some of us forever, to seek other states, other lives, other souls.”

15. “There are very few human beings who receive the truth, complete and staggering, by instant illumination. Most of them acquire it fragment by fragment, on a small scale, by successive developments, cellularly, like a laborious mosaic.”

17. “The human father has to be confronted and recognized as human, as man who created a child and then, by his absence, left the child fatherless and then Godless.”

18. “Good things happen to those who hustle.”

19. “There are many ways to be free. One of them is to transcend reality by imagination, as I try to do.”

20. “How wrong it is for a woman to expect the man to build the world she wants, rather than to create it herself.” 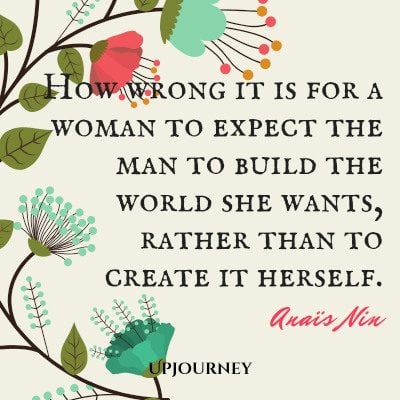 21. “A leaf fluttered in through the window this morning, as if supported by the rays of the sun, a bird settled on the fire escape, joy in the task of coffee, joy accompanied me as I walked.”

22. “And the day came when the risk to remain tight in a bud was more painful than the risk it took to blossom.”

23. “If all of us acted in unison as I act individually there would be no wars and no poverty. I have made myself personally responsible for the fate of every human being who has come my way.”

If you’d like to read the works of Anaïs Nin, we recommend that you read Little Birds and In Favor of the Sensitive Man, Other Essays.