Andrew Carnegie was a Scottish-American industrialist, philanthropist, and business tycoon. He led the massive development of the American steel industry in the late 19th century.

Although he was regarded as one of the wealthiest people (and wealthiest Americans) in history, he chose to give away about $350 million to numerous foundations, charities, and universities—which was almost 90 percent of his fortune—before he passed away.

His inspiring article “The Gospel of Wealth” which he wrote in 1889, describes the responsibility of philanthropy by the new upper-class people. He argued against the wasteful use of capital in the form of reckless spending, extravagance, or self-indulgence. Instead, he promoted the cause of diminishing the stratification between the rich and the poor.

Here’s our collection of the most empowering Andrew Carnegie quotes that explore his views regarding courage, wealth, teamwork, and more.

1. “No person will make a great business who wants to do it all himself or get all the credit.”

2. “The average person puts only 25% of his energy and ability into his work. The world takes off its hat to those who put in more than 50% of their capacity, and stands on its head for those few and far between souls who devote 100%.”

4. “I resolved to stop accumulating and begin the infinitely more serious and difficult task of wise distribution.”

5. “I shall argue that strong men, conversely, know when to compromise and that all principles can be compromised to serve a greater principle.”

6. “No man will make a great leader who wants to do it all himself or get all the credit for doing it.”

7. “You cannot push anyone up the ladder unless he is willing to climb.” 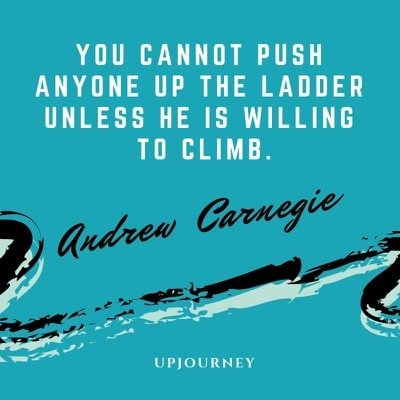 1. “Whatever I engage in, I must push inordinately.”

2. “All honor’s wounds are self-inflicted.”

3. “People who are unable to motivate themselves must be content with mediocrity, no matter how impressive their other talents.”

4. “The ‘morality of compromise’ sounds contradictory. Compromise is usually a sign of weakness or an admission of defeat. Strong men don’t compromise, it is said, and principles should never be compromised.”

5. “He that cannot reason is a fool. He that will not is a bigot. He that dare not is a slave.”

6. “Think of yourself as on the threshold of unparalleled success. A whole, clear, glorious life lies before you. Achieve! Achieve!” 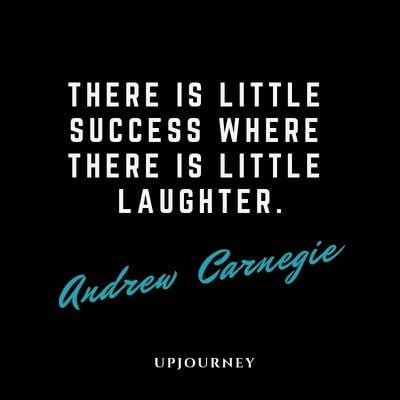 9. “Do your duty and a little more and the future will take care of itself.”

10. “And while the law of competition may be sometimes hard for the individual, it is best for the race, because it ensures the survival of the fittest in every department.”

12. “The man who acquires the ability to take full possession of his own mind may take possession of anything else to which he is justly entitled.”

1. “There is no class so pitiably wretched as that which possesses money and nothing else.”

2. “Concentrate your energies, your thoughts, and your capital. The wise man puts all his eggs in one basket and watches the basket.”

3. “The way to become rich is to put all your eggs in one basket and then watch that basket.” 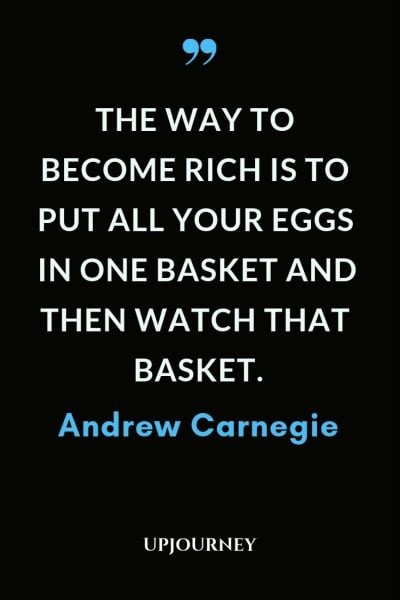 4. “I would as soon leave my son a curse as the almighty dollar.”

5. “Surplus wealth is a sacred trust which its possessor is bound to administer in his lifetime for the good of the community.”

1. “Concentration is my motto – first honesty, then industry, then concentration.”

2. “You must capture and keep the heart of the original and supremely able man before his brain can do its best.”

3. “Immense power is acquired by assuring yourself in your secret reveries that you were born to control affairs.”

4. “Every act you have ever performed since the day you were born was performed because you wanted something.”

5. “As I grow older, I pay less attention to what men say. I just watch what they do.” 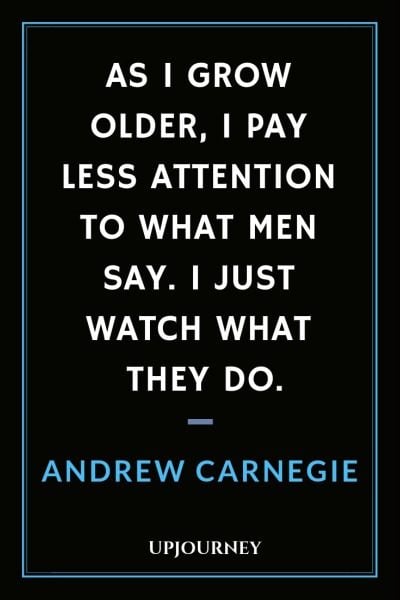 6. “Do not look for approval except for the consciousness of doing your best.”