Anne Frank is one of the most discussed victims of the Holocaust. Born in 1929, Anne was the youngest daughter of Otto and Edith Frank.

On her thirteenth birthday, Anne received a simple birthday present: an autograph book wrapped in red and white checkered cloth. This book would then become Anne’s diary, in which she chronicled her life of hiding in the Achterhuis (Secret Annex) for two years.

Anne’s last entry was on the first day of August 1944. Three days later, German police stormed their hiding place and transported the Franks to concentration camps. She was 15 years old when she died of typhus at the Bergen-Belsen camp in northern Germany.

Her father, Otto, was the sole survivor of the family. Upon returning to the Achterhuis, Otto’s secretary handed him some of the papers she had recovered, including Anne’s diary. After reading his daughter’s entries, Otto resolved to have Anne’s diary published to make her dream come true to become a writer.

Know more of this young girl’s impact and find hope in times of war as you read through some of the most inspirational Anne Frank quotes and sayings.

1. “In spite of everything I still believe that people are really good at heart. I simply can’t build up my hopes on a foundation consisting of confusion, misery and death.” 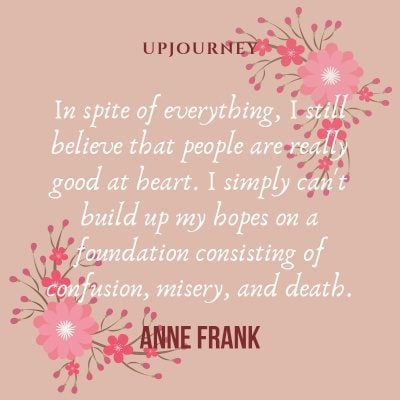 3. “Think of all the beauty still left around you and be happy.”

4. “Whoever is happy will make others happy too.”

5. “Who would ever think that so much went on in the soul of a young girl?”

6. “How wonderful it is that nobody need wait a single moment before starting to improve the world.”

7. “I’m afraid that people who know me as I usually am will discover I have another side, a better and finer side. I’m afraid they’ll mock me, think I’m ridiculous and sentimental and not take me seriously. I’m used to not being taken seriously, but only the ‘light-hearted’ Anne is used to it and can put up with it; the ‘deeper’ Anne is too weak.”

8. “Parents can only give good advice or put them on the right paths, but the final forming of a person’s character lies in their own hands.”

9. “I see the world being slowly transformed into a wilderness; I hear the approaching thunder that, one day, will destroy us too. I feel the suffering of millions. And yet, when I look up at the sky, I somehow feel that everything will change for the better, that this cruelty too shall end, that peace and tranquility will return once more.”

10. “Whoever doesn’t know it must learn and find by experience that ‘a quiet conscience makes one strong!'” 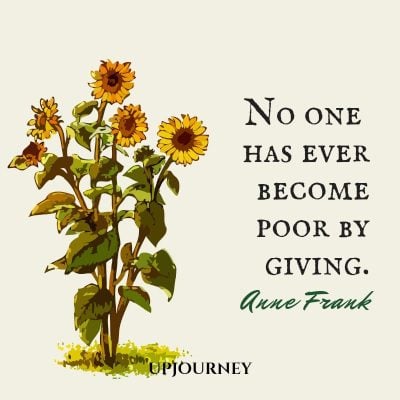 12. “I have often been downcast but never in despair; I regard our hiding as a dangerous adventure, romantic and interesting at the same time. In my diary, I treat all the privations as amusing.”

13. “The best remedy for those who are afraid, lonely or unhappy is to go outside, somewhere where they can be quiet, alone with the heavens, nature and God. Because only then does one feel that all is as it should be.”

14. “And finally I twist my heart round again, so that the bad is on the outside and the good is on the inside, and keep on trying to find a way of becoming what I would so like to be, and could be, if there weren’t any other people living in the world.”

15. “We all live with the objective of being happy; our lives are all different and yet the same.”

16. “If I read a book that impresses me, I have to take myself firmly by the hand, before I mix with other people; otherwise they would think my mind rather queer.”

17. “I soothe my conscience now with the thought that it is better for hard words to be on paper than that Mummy should carry them in her heart.”

18. “I simply can’t build my hopes on a foundation of confusion, misery and death… I think… peace and tranquillity will return again.”

19. “I don’t want to have lived in vain like most people. I want to be useful or bring enjoyment to all people, even those I’ve never met. I want to go on living even after my death!”

20. “I must uphold my ideals, for perhaps the time will come when I shall be able to carry them out.”

21. “In the long run, the sharpest weapon of all is a kind and gentle spirit.” 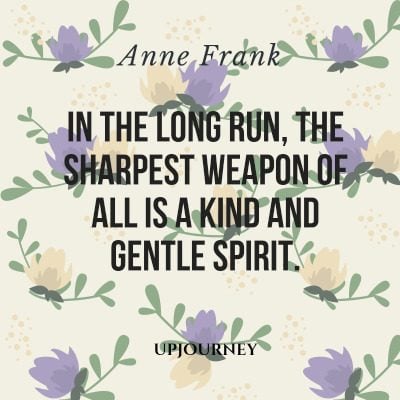 22. “If I haven’t any talent for writing books or newspaper articles, well, then I can always write for myself.”

24. “Human greatness does not lie in wealth or power, but in character and goodness. People are just people, and all people have faults and shortcomings, but all of us are born with a basic goodness.”

25. “Everyone has inside of him a piece of good news. The good news is that you don’t know how great you can be! How much you can love! What you can accomplish! And what your potential is!”

26. “I don’t think of all the misery but of the beauty that still remains.”

27. “Although I’m only fourteen, I know quite well what I want. I know who is right and who is wrong. I have my opinions, my own ideas and principles, and although it may sound pretty mad from an adolescent, I feel more of a person than a child. I feel quite independent of anyone.”

If you’d like to read more of Anne Frank’s uplifting thoughts and words, we recommend you read The Diary of A Young Girl. 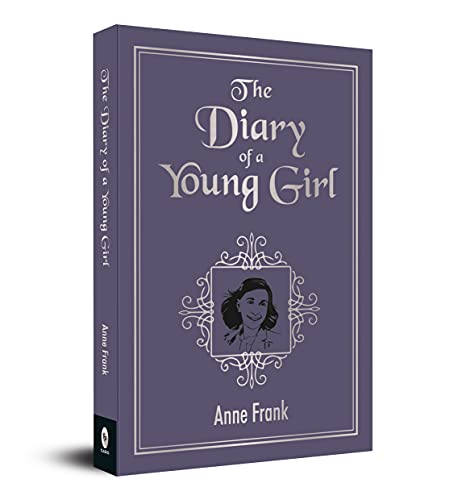