As a poet, her writings express outrage and anger at social and civil injustices she witnessed throughout her life. Her poems mostly deal with matters related to feminism, civil rights, and lesbianism among many others.

Following her education, Lorde went to study at the National University of Mexico, where she developed her views as a feminist and activist, who also happened to be lesbian. She was not only a poet but also an essayist and wrote her thoughts on the various aspects of social activism. Lorde furthered her education at Columbia University and obtained a master’s degree in Library Science in 1961. She continued to work as a librarian at several institutions while continuing to be a notable poet and civil right activist.

Lorde was a notable social activist of her time and remained to be so for the majority of her life. We have compiled some of the most notable quotes and sayings by Audre Lorde that explores her thoughts and views about racism, feminism, courage, and a lot more.

1. “We have to consciously study how to be tender with each other until it becomes a habit because what was native has been stolen from us, the love of Black women for each other.”

2. “When we speak, we are afraid our words will not be heard or welcomed. But when we are silent, we are still afraid. So it is better to speak.” 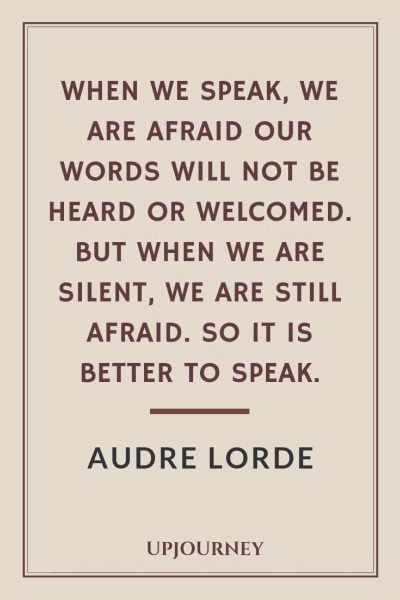 3. “There’s always someone asking you to underline one piece of yourself – whether it’s Black, woman, mother, dyke, teacher, etc. – because that’s the piece that they need to key in to. They want to dismiss everything else.”

4. “I write for those women who do not speak, for those who do not have a voice because they were so terrified because we are taught to respect fear more than ourselves. We’ve been taught that silence would save us, but it won’t.”

1. “I remember how being young and black and gay and lonely feeling. A lot of it was fine, feeling I had the truth and the light and the key, but a lot of it was purely hell.”

3. “But, on the other hand, I get bored with racism too and recognize that there are still many things to be said about a Black person and a White person loving each other in a racist society.”

4. “It is not our differences that divide us. It is our inability to recognize, accept, and celebrate those differences.” 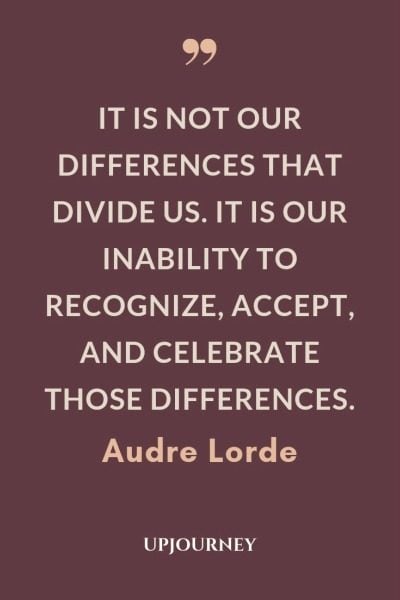 1. “When I dare to be powerful – to use my strength in the service of my vision, then it becomes less and less important whether I am afraid.”

2. “But the question is a matter of the survival and the teaching. That’s what our work comes down to. No matter where we key into it, it’s the same work, just different pieces of ourselves doing it.”

3. “I have come to believe over and over again that what is most important to me must be spoken, made verbal and shared, even at the risk of having it bruised or misunderstood.”

4. “When I use my strength in the service of my vision it makes no difference whether or not I am afraid.” 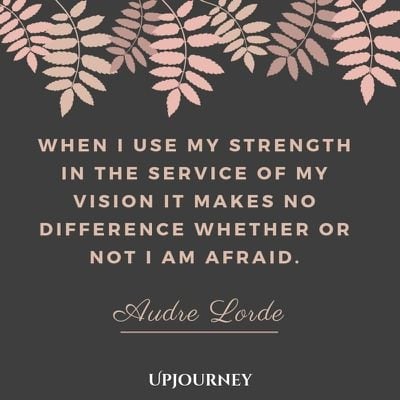 5. “Poetry is not only dream and vision; it is the skeleton architecture of our lives. It lays the foundations for a future of change, a bridge across our fears of what has never been before.”

1. “In other words, I would be giving in to a myth of sameness which I think can destroy us.”

2. “I would like to do another piece of fiction dealing with a number of issues: Lesbian parenting, the 1960s, and interracial relationships in the Lesbian and Gay community.”

3. “I am deliberate and afraid of nothing.”

4. “The sharing of joy, whether physical, emotional, psychic, or intellectual, forms a bridge between the sharers which can be the basis for understanding much of what is not shared between them, and lessens the threat of their difference.”

6. “Attend me, hold me in your muscular flowering arms, protect me from throwing any part of myself away.”

7. “There are no new ideas. There are only new ways of making them felt.”

8. “If I didn’t define myself for myself, I would be crunched into other people’s fantasies for me and eaten alive.”

9. “Life is very short and what we have to do must be done in the now.”

10. “Our visions begin with our desires.” 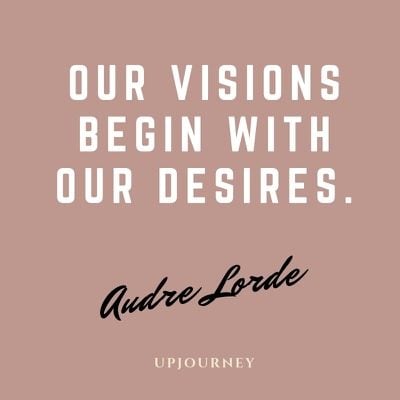 11. “Your silence will not protect you.”

12. “You know how fighting fish do it? They blow bubbles and in each one of those bubbles is an egg and they float the egg up to the surface. They keep this whole heavy nest of eggs floating, and they’re constantly repairing it. It’s as if they live in both elements.”

If you would like to know more about the writings of Audre Lorde, we would suggest you read Sister Outsider: Essays and Speeches (Crossing Press Feminist Series).