Audrey Kathleen Ruston, widely known as Audrey Hepburn, was a well-loved British actress, dancer, model, and humanitarian. She was known as a film and fashion icon during Hollywood’s Golden Age and even until now.

She soared to stardom after playing the lead role in the romantic movie Roman Holiday (1953), for which she received a Golden Globe Award, an Academy Award, and a BAFTA Award. She was the first actress to win said awards for a single performance.

Since then, Audrey Hepburn went on to star in many successful films, including Sabrina (1954), Breakfast at Tiffany’s (1961), and My Fair Lady (1964) to name a few, for which she won numerous recognitions. She also remains one of only 15 people who has received an Academy, Tony, Grammy, and Emmy Awards.

Audrey captivated the world with her extraordinary film portrayals, but aside from being an incredible actress, she was also known for having a big heart. She appeared in fewer films as her life went on and devoted much of her later life to helping other people. Even with 31 film credits to her name, Audrey always considered her most significant role to being a UNICEF Goodwill Ambassador, where she worked in some of the most impoverished communities in Asia, Latin America, and Africa. In December 1992, she was awarded the Presidential Medal of Freedom in recognition of her work as a Goodwill Ambassador.

A month later, Audrey Hepburn passed away at age 63 due to appendiceal cancer. Upon her passing, her children set up the Audrey Hepburn Children’s Fund to honor and continue their mother’s significant humanitarian work.

Here are some of the most inspiring Audrey Hepburn quotes and sayings that explores her thoughts and views regarding life, charity, beauty, elegance, and more.

1. “Pick the day. Enjoy it – to the hilt. The day as it comes. People as they come… The past, I think, has helped me appreciate the present – and I don’t want to spoil any of it by fretting about the future.”

2. “The most important thing is to enjoy your life – to be happy – it’s all that matters.” 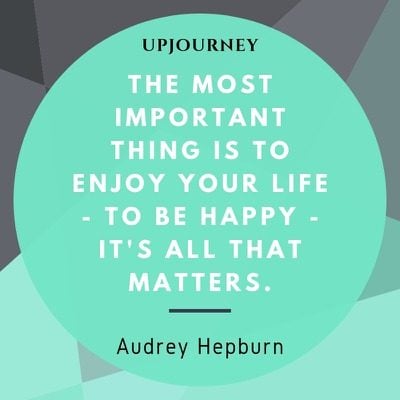 3. “If my world were to cave in tomorrow, I would look back on all the pleasures, excitements and worthwhilenesses I have been lucky enough to have had. Not the sadness, not my miscarriages or my father leaving home, but the joy of everything else. It will have been enough.”

4. “Success is like reaching an important birthday and finding you’re exactly the same.”

5. “I decided, very early on, just to accept life unconditionally; I never expected it to do anything special for me, yet I seemed to accomplish far more than I had ever hoped. Most of the time it just happened to me without my ever seeking it.”

6. “Living is like tearing through a museum. Not until later do you really start absorbing what you saw, thinking about it, looking it up in a book, and remembering – because you can’t take it in all at once.”

7. “Nothing is impossible, the word itself says I’m possible!”

8. “When you have nobody you can make a cup of tea for, when nobody needs you, that’s when I think life is over.”

1. “You can tell more about a person by what he says about others than you can by what others say about him.”

2. “Since the world has existed, there has been injustice. But it is one world, the more so as it becomes smaller, more accessible. There is just no question that there is more obligation that those who have should give to those who have nothing.”

3. “As you grow older, you will discover that you have two hands, one for helping yourself, the other for helping others.”

4. “It’s that wonderful old-fashioned idea that others come first and you come second. This was the whole ethic by which I was brought up. Others matter more than you do, so don’t fuss, dear; get on with it.”

5. “Remember, if you ever need a helping hand, it’s at the end of your arm, as you get older, remember you have another hand: The first is to help yourself, the second is to help others.”

6. “People, even more than things, have to be restored, renewed, revived, reclaimed, and redeemed; never throw out anyone.”

7. “The best thing to hold onto in life is each other.” 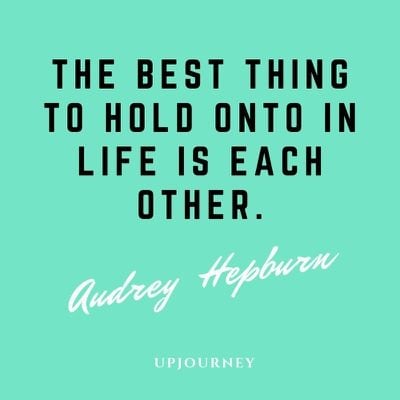 2. “For beautiful eyes, look for the good in others; for beautiful lips, speak only words of kindness; and for poise, walk with the knowledge that you are never alone.” 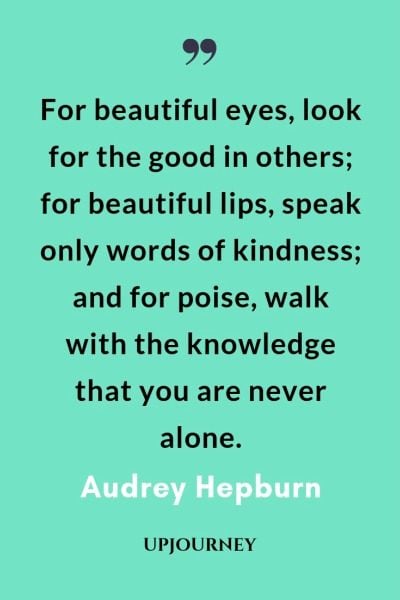 4. “There is more to sex appeal than just measurements. I don’t need a bedroom to prove my womanliness. I can convey just as much sex appeal, picking apples off a tree or standing in the rain.”

1. “If I’m honest I have to tell you I still read fairy-tales and I like them best of all.”

3. “Let’s face it, a nice creamy chocolate cake does a lot for a lot of people; it does for me.”

4. “I have to be alone very often. I’d be quite happy if I spent from Saturday night until Monday morning alone in my apartment. That’s how I refuel.”

6. “Everything I learned I learned from the movies.”

7. “I probably hold the distinction of being one movie star who, by all laws of logic, should never have made it. At each stage of my career, I lacked the experience.”

8. “I’ve been lucky. Opportunities don’t often come along. So, when they do, you have to grab them.”

9. “I never thought I’d land in pictures with a face like mine.” 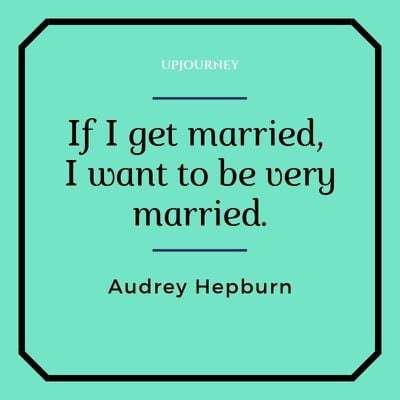 11. “I heard a definition once: Happiness is health and a short memory! I wish I’d invented it because it is very true.”

12. “I love people who make me laugh. I honestly think it’s the thing I like most, to laugh. It cures a multitude of ills. It’s probably the most important thing in a person.”

14. “I’m an introvert… I love being by myself, love being outdoors, love taking a long walk with my dogs and looking at the trees, flowers, the sky.”

15. “I never think of myself as an icon. What is in other people’s minds is not in my mind. I just do my thing.”

18. “I was born with an enormous need for affection, and a terrible need to give it.” 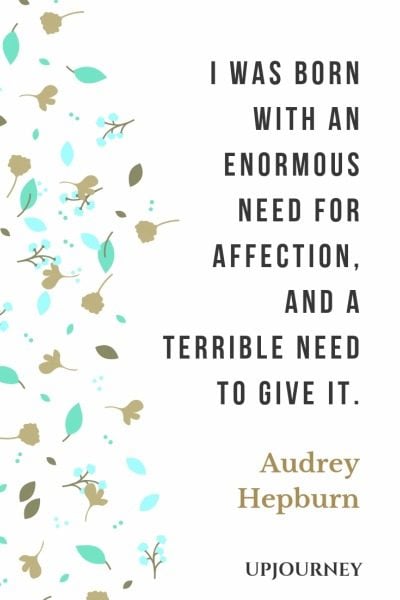 If you would like to know more about the life story of the incredible Audrey Hepburn, we would suggest you read Audrey Hepburn by Barry Paris.