George Herman Ruth Jr., or a popularly known as Babe Ruth, was an American professional baseball player who broke many records and played for over 22 baseball seasons.

Born in 1895 at 216 Emory Street, Baltimore, Maryland, Ruth was the son of George Herman Sr. and Katherine. Details aren’t precise why, at the age of 7, Ruth was sent to St. Mary’s Industrial School for Boys, an orphanage. Also, it’s unclear how his baseball career started, but Ruth began his career in 1914 as Boston Red Sox’s left-handed pitcher.

Ruth, however, gained his success when he became the slugging outfielder of the New York Yankees from 1920 to 1934. Throughout his career, Ruth has scored over 700 home runs and won 23 games in one season. He is considered one of the greatest American sports heroes and regarded as the greatest baseball player of all time.

Get to know “The Bambino” of baseball as you read through some of the best Babe Ruth quotes and sayings that explore his thoughts on baseball, teamwork, and many more.

1. “The way a team plays as a whole determines its success. You may have the greatest bunch of individual stars in the world, but if they don’t play together, the club won’t be worth a dime.”

2. “Reading isn’t good for a ballplayer. Not good for his eyes. If my eyes went bad even a little bit I couldn’t hit home runs. So I gave up reading.”

3. “You just can’t beat the person who never gives up.” 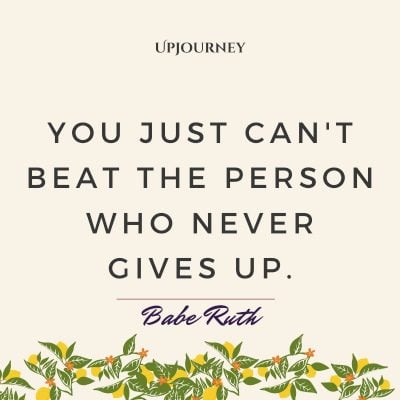 4. “I had only one superstition. I made sure to touch all the bases when I hit a home run.”

5. “Every strike brings me closer to the next home run.”

7. “I learned early to drink beer, wine and whiskey. And I think I was about 5 when I first chewed tobacco.”

9. “Gee, its lonesome in the outfield. It’s hard to keep awake with nothing to do.”

10. “Baseball changes through the years. It gets milder.”

11. “I won’t be happy until we have every boy in America between the ages of six and sixteen wearing a glove and swinging a bat.” 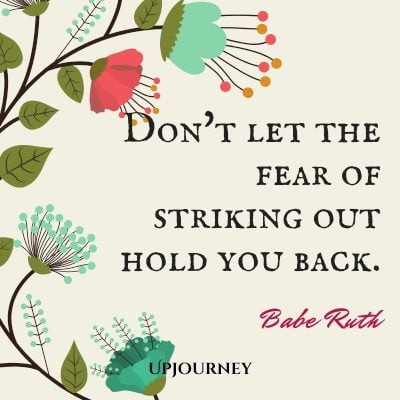 16. “Don’t ever forget two things I’m going to tell you. One, don’t believe everything that’s written about you. Two, don’t pick up too many checks.”

17. “All I can tell them is pick a good one and sock it. I get back to the dugout and they ask me what it was I hit and I tell them I don’t know except it looked good.”

18. “If it wasn’t for baseball, I’d be in either the penitentiary or the cemetery.”

20. “As soon as I got out there I felt a strange relationship with the pitcher’s mound. It was as if I’d been born out there. Pitching just felt like the most natural thing in the world. Striking out batters was easy.”

21. “All ballplayers should quit when it starts to feel as if all the baselines run uphill.”

23. “Never let the fear of striking out get in your way.” 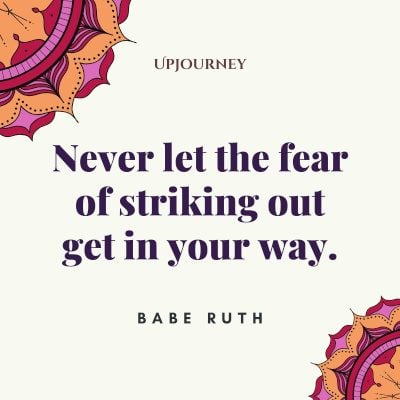 24. “Baseball was, is and always will be to me the best game in the world.”

If you’d like to know more about the life of Babe Ruth, we recommend you read his biography The Big Fella: Babe Ruth and the World He Created by Jane Leavy.