Aside from that, hooks also wanted to divert the focus from herself—instead, she wanted the readers to focus more on her works and the essence of the books she wrote.

She has shaped the face of contemporary feminism for decades through her words, writings, and actions. She has also published over 30 books, and they explore how class, race, and gender shape our awareness and the social and cultural landscape around us.

Her writing style is straightforward yet powerful and is sure to inspire people of various age and gender. Here are the top 20 bell hooks quotes and sayings that showcase her views regarding life, people, and more.

1. “Death is with you all the time; you get deeper in it as you move towards it, but it’s not unfamiliar to you. It’s always been there, so what becomes unfamiliar to you when you pass away from the moment is really life.”

2. “For me, forgiveness and compassion are always linked: how do we hold people accountable for wrongdoing and yet at the same time remain in touch with their humanity enough to believe in their capacity to be transformed?”

4. “Some people act as though art that is for a mass audience is not good art, and I think this has been a very negative thing. I know that I have wanted very much to write books that are accessible to the widest audience possible.”

5. “It’s in the act of having to do things that you don’t want to that you learn something about moving past the self. Past the ego.”

6. “I began writing a book on love because I felt that the United States is moving away from love.” 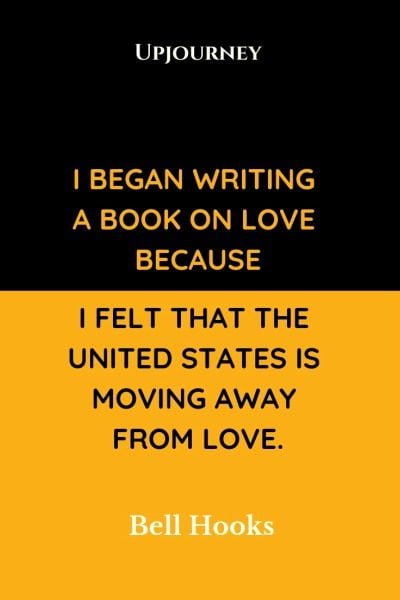 7. “I thought about how we need to make children feel that there are times in their lives when they need to be alone and quiet and to be able to accept their aloneness.”

8. “Why is it that many contemporary male thinkers, especially men of color, repudiate the imperialist legacy of Columbus but affirm dimensions of that legacy by their refusal to repudiate patriarchy?”

9. “The political core of any movement for freedom in the society has to have the political imperative to protect free speech.”

11. “What had begun as a movement to free all black people from racist oppression became a movement with its primary goal the establishment of black male patriarchy.”

12. “Yesterday I was thinking about the whole idea of genius and creative people, and the notion that if you create some magical art, somehow that exempts you from having to pay attention to the small things.”

13. “Many spiritual teachers – in Buddhism, in Islam – have talked about the first-hand experience of the world as an important part of the path to wisdom, to enlightenment.”

14. “I’m such a girl for the living room. I really like to stay in my nest and not move. I travel in my mind, and that that’s a rigorous state of journeying for me. My body isn’t that interested in moving from place to place.”

15. “Life-transforming ideas have always come to me through books.” 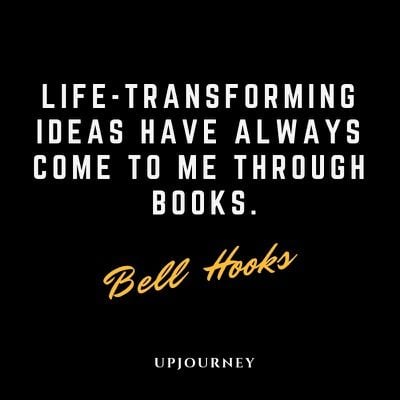 16. “I feel like there is always something trying to pull us back into sleep, that there is this sort of seductive quality in all the hedonistic pleasures that pull on us.”

18. “We judge on the basis of what somebody looks like, skin color, whether we think they’re beautiful or not. That space on the Internet allows you to converse with somebody with none of those things involved.”

19. “I will not have my life narrowed down. I will not bow down to somebody else’s whim or to someone else’s ignorance.”

20. “I have been thinking about the notion of perfect love as being without fear, and what that means for us in a world that’s becoming increasingly xenophobic, tortured by fundamentalism and nationalism.”

If you would like to learn more about the works of bell hooks, we would suggest you read one of her best-selling books titled “All About Love: New Visions.”