Robert Allen Zimmerman, most commonly known as Bob Dylan, is a singer-songwriter, author, painter, and visual artist who has been a significant figure in popular culture for sixty years. His lyrics are known for incorporating a wide range of social, political, philosophical, and literary influences that defied the conventions of popular music.

Dylan is known as the “voice of a generation” and sold over 100 million records, and has also received numerous awards including 10 Grammy Awards, an Academy Award, as well as a Golden Globe Award. In 2016, he was also granted the Nobel Prize in Literature.

Aside from his music, Dylan has also published eight books of drawings and paintings, and his work has been displayed and exhibited in major art galleries.

Below are some of the best Bob Dylan quotes and sayings about music, time, life & death, and so much more.

2. “Here’s the thing with me and the religious thing. This is the flat-out truth: I find the religiosity and philosophy in the music. I don’t find it anywhere else.”

3. “A song is anything that can walk by itself.” 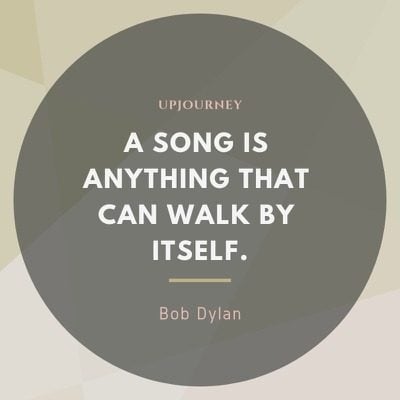 4. “People today are still living off the table scraps of the sixties. They are still being passed around – the music and the ideas.”

5. “What good are fans? You can’t eat applause for breakfast. You can’t sleep with it.”

7. “I’ve never written a political song. Songs can’t save the world. I’ve gone through all that.”

8. “You can’t imagine parlor ballads drifting out of high-rise multi-towered buildings. That kind of music existed in a more timeless state of life.”

9. “I became interested in folk music because I had to make it somehow.”

10. “Just because you like my stuff doesn’t mean I owe you anything.”

12. “This land is your land and this land is my land, sure, but the world is run by those that never listen to music anyway.” 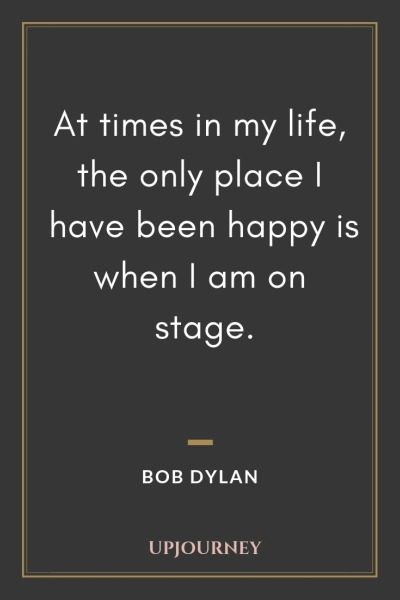 14. “A lot of people can’t stand touring but to me, it’s like breathing. I do it because I’m driven to do it.”

1. “Death to me means nothing as long as I can die fast.”

2. “I define nothing. Not beauty, not patriotism. I take each thing as it is, without prior rules about what it should be.”

3. “The land created me. I’m wild and lonesome. Even as I travel to the cities, I’m more at home in the vacant lots.” 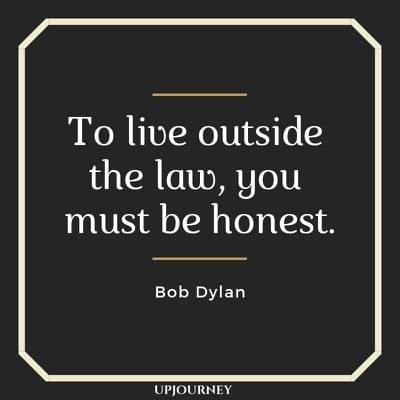 6. “I change during the course of a day. I wake and I’m one person, and when I go to sleep I know for certain I’m somebody else.”

7. “There is nothing so stable as change.”

8. “All this talk about equality. The only thing people really have in common is that they are all going to die.”

1. “I don’t think the human mind can comprehend the past and the future. They are both just illusions that can manipulate you into thinking there’s some kind of change.”

2. “You learn from a conglomeration of the incredible past – whatever experience gotten in any way whatsoever.”

3. “Yesterday’s just a memory, tomorrow is never what it’s supposed to be.” 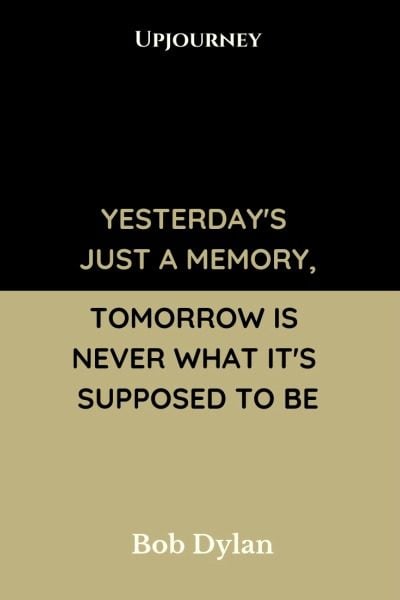 5. “Well, the future for me is already a thing of the past.”

1. “What’s money? A man is a success if he gets up in the morning and goes to bed at night and in between does what he wants to do.”

2. “Don’t matter how much money you got, there are only two kinds of people: there’s saved people and there’s lost people.” 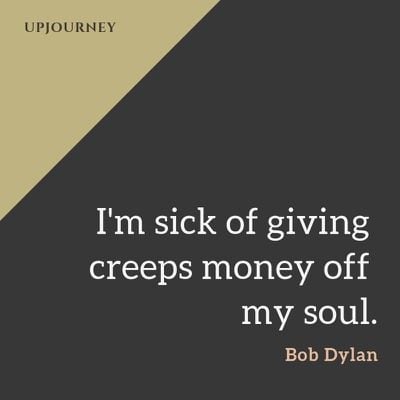 1. “I’m speaking for all of us. I’m the spokesman for a generation.”

2. “A person is a success if they get up in the morning and gets to bed at night and in between does what he wants to do.”

3. “When you cease to exist, then who will you blame?”

4. “I have dined with kings, I’ve been offered wings. And I’ve never been too impressed.”

5. “In ceremonies of the horsemen, even the pawn must hold a grudge.”

8. “A hero is someone who understands the responsibility that comes with his freedom.”

Related: What Makes Someone a Hero

9. “Colleges are like old-age homes, except for the fact that more people die in colleges.”

10. “I think a poet is anybody who wouldn’t call himself a poet.” 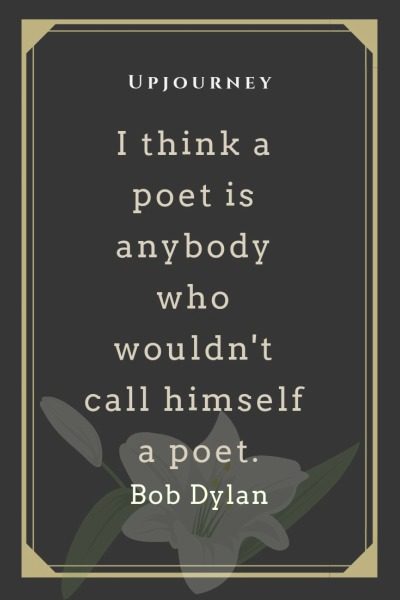 11. “I am against nature. I don’t dig nature at all. I think nature is very unnatural. I think the truly natural things are dreams, which nature can’t touch with decay.”

12. “Take care of all your memories. For you cannot relive them.”

13. “I consider myself a poet first and a musician second. I live like a poet and I’ll die like a poet.”

16. “I don’t think I’ve ever been an agnostic. I’ve always thought there’s a superior power, that this is not the real world and that there’s a world to come.”

17. “Being noticed can be a burden. Jesus got himself crucified because he got himself noticed. So I disappear a lot.” 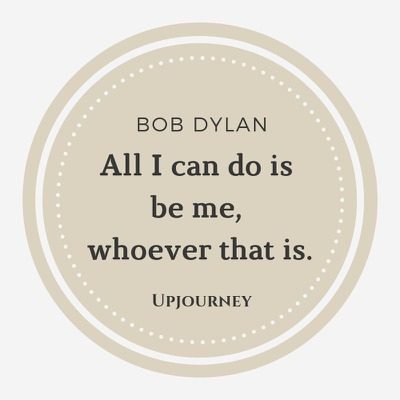 19. “I’m more of an adventurous type than a relationship type.”

21. “But even the President of the United States sometimes must have to stand naked.”

22. “Basically you have to suppress your own ambitions in order to be who you need to be.”

23. “Democracy doesn’t rule the world, you’d better get that in your head; This world is ruled by violence, But I guess that’s better left unsaid.”

24. “People seldom do what they believe in. They do what is convenient, then repent.”

25. “I like America, just as everybody else does. I love America, I gotta say that. But America will be judged.” 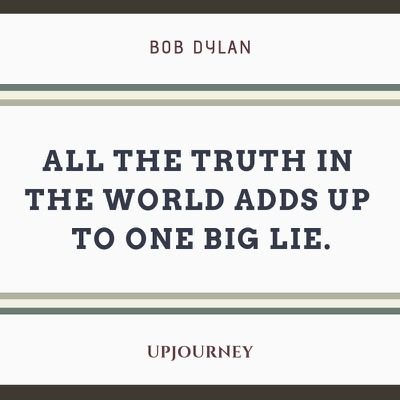 28. “You hear a lot about God these days: God, the beneficent God, the all-great God, the Almighty God, the most powerful God, the giver of life God, the creator of death. I mean, we’re hearing about God all the time, so we better learn how to deal with it. But if we know anything about God, God is arbitrary.”

31. “I paint mostly from real life. It has to start with that. Real people, real street scenes, behind the curtain scenes, live models, paintings, photographs, staged setups, architecture, grids, graphic design. Whatever it takes to make it work.”

32. “If I wasn’t Bob Dylan, I’d probably think that Bob Dylan has a lot of answers myself.”

35. “I think of a hero as someone who understands the degree of responsibility that comes with his freedom.” 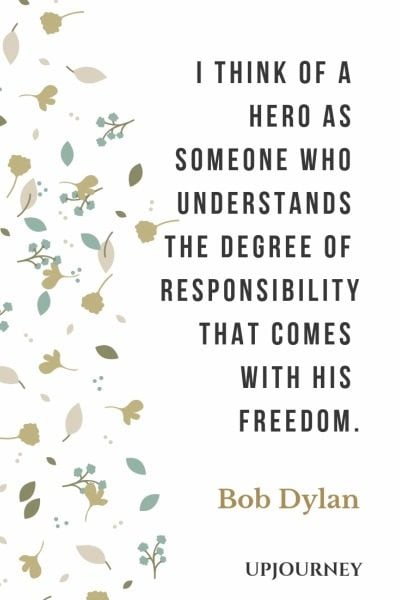 36. “A mistake is to commit a misunderstanding.”

If you want to know more about the life and works of Bob Dylan, we would suggest you read Daniel Kramer: Bob Dylan, A Year and a Day.