Whether you have a brother by blood or by heart, you know how special and unique your relationship is with him. Having an older brother means you have someone who’d make sure you’re all right and protect you from anything that might cause you harm. On the other hand, having a younger brother means learning to be responsible and becoming a good role model for them. With a twin brother, it’s like you have your own best friend and you both get to learn more about the world together.

Regardless of what kind of brother you have, you will be always be connected. There will be the occasional bickering and misunderstandings just like any family. But at the end of the day, a good brother will love you as you are and accept you no matter what.

Hug your brother and let them know how much you appreciate them through some of the best brother quotes and sayings we have collected.

1. “Brothers don’t necessarily have to say anything to each other – they can sit in a room and be together and just be completely comfortable with each other.” — Leonardo DiCaprio

2. “Brothers in suffering, brothers in resistance, brothers in ideals and conviction. It is now our duty to further strengthen this bond in order to secure this hard-won freedom for future generations.” — Guy Verhofstadt

3. “Brotherhood is the very price and condition of man’s survival.” — Carlos P. Romulo 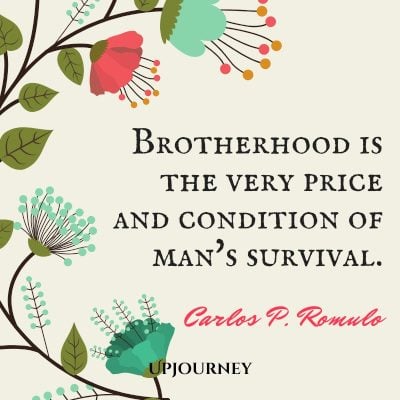 4. “When you deal with your brother, be pleasant, but get a witness.” — Hesiod

5. “A friend loveth at all times, and a brother is born for adversity.” — King Solomon

6. “If someone saves your life, you develop a brotherhood, no matter what your race.” — Omar Epps

7. “Above all things let us never forget that mankind constitutes one great brotherhood; all born to encounter suffering and sorrow, and therefore bound to sympathize with each other.” — Albert Pike

8. “One can be a brother only in something. Where there is no tie that binds men, men are not united but merely lined up.” — Antoine de Saint-Exupery

9. “All wars are civil wars, because all men are brothers.” — Francois Fenelon

10. “Right knows no boundaries, and justice no frontiers; the brotherhood of man is not a domestic institution.” — Learned Hand

12. “Never make a companion equal to a brother.” — Hesiod

13. “We’re brothers and we all look after each other. If one person falls down, the rest of the team is going to be there to pick him up. We just work hard together to get it done.” — Michael Williams 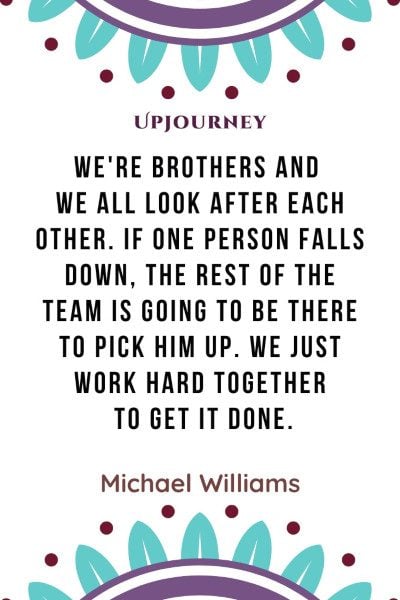 14. “We must learn to live together as brothers or perish together as fools.” — Martin Luther King, Jr.

15. “You may call for peace as loudly as you wish, but where there is no brotherhood there can in the end be no peace.” — Max Lerner

16. “Affliction’s sons are brothers in distress; A brother to relieve, how exquisite the bliss!” — Robert Burns

17. “Unless man is committed to the belief that all mankind are his brothers, then he labors in vain and hypocritically in the vineyards of equality.” — Adam Clayton

18. “Condemn none: if you can stretch out a helping hand, do so. If you cannot, fold your hands, bless your brothers, and let them go their own way.” — Swami Vivekananda

19. “You must recognize that the way to get the good out of your brother and your sister is not to return evil for evil.” — Louis Farrakhan

20. “No more war! Never again war! If you wish to be brothers, drop your weapons.” — Pope Paul VI

21. “Brotherhood is not just a Bible word. Out of comradeship can come and will come the happy life for all.” — Heywood Broun

22. “Only in solitude do we find ourselves; and in finding ourselves, we find in ourselves all our brothers in solitude.” — Miguel de Unamuno

23. “A sympathetic friend can be quite as dear as a brother.” — Homer 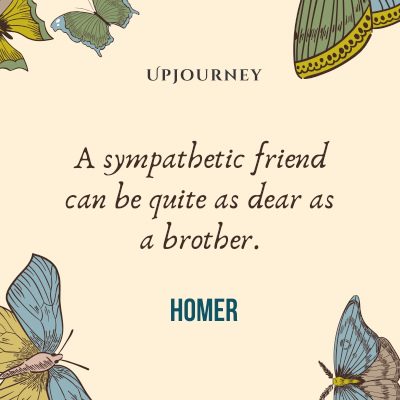 24. “Community cannot for long feed on itself; it can only flourish with the coming of others from beyond, their unknown and undiscovered brothers.” — Howard Thurman

25. “The crest and crowning of all good, life’s final star, is Brotherhood.” — Edwin Markham

26. “No life’s worth more than any other, no sister worth less than any brother.” — Michael Franti

27. “It takes two men to make one brother.” — Israel Zangwill

28. “My father wants me to be like my brother, but I can’t be.” — Robert Mapplethorpe

29. “A brother who recognizes that we have shortcomings, we, in the struggle, have faults, and that he wanted to reconcile differences.” — Louis Farrakhan

30. “The most dangerous word in any human tongue is the word for brother. It’s inflammatory.” — Tennessee Williams

31. “The opportunity for brotherhood presents itself every time you meet a human being.” — Jane Wyman

32. “Distance does not decide who is your brother and who is not. The church is going to have to become the conscience of the free market if it’s to have any meaning in this world – and stop being its apologist.” — Bono 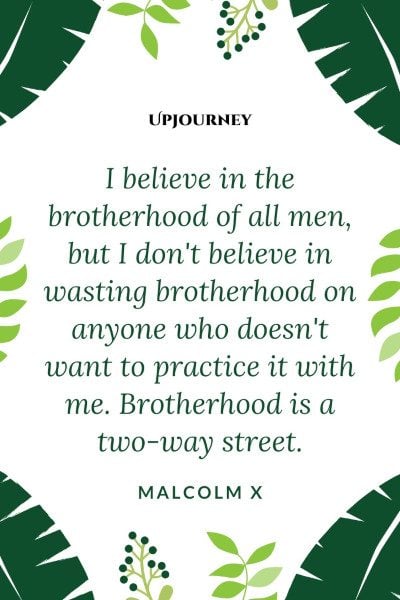