Siddhārtha Gautama, or simply known as the Buddha, was a monk, sage, teacher, and philosopher on whose teachings Buddhism was founded.

Historians believe that he was born into a royal family in what is now Nepal. Growing up, he was brilliant and compassionate. It was even predicted that he would either become a great king or a spiritual leader.

Since his parents wanted a mighty ruler for their kingdom, they tried to prevent him from witnessing the terrible nature of the world, so they enveloped him with all kinds of luxury and pleasure. However, during his 20s, the prince was confronted with the harsh realities outside of the comfort and leisure of their palace. This experience led him on a journey for enlightenment.

He left the palace in secret and set off alone into the forest. Over the next years, he met several gifted meditation teachers and studied (eventually mastered) their techniques. Finally, at a place called Bodh Gaya, Gautama chose to remain in meditation until he knew the mind’s true nature. It was then that he became Buddha, the Awakened One.

After his enlightenment, Buddha traveled on foot throughout northern India and taught numerous people from aevll castes and professions on how to achieve enlightenment. His doctrines and teachings ultimately became what is now known as Buddhism.

Records of his life, discourses, and religious rules are believed by Buddhists to have been compiled after his death and memorized by his many followers. Numerous collections of teachings attributed to him were passed down by oral tradition (information passed down through generations, preserved and transmitted only by word of mouth and not written down; usually through speeches or songs) and were only committed to writing about hundreds of years later.

Here are the top 66 Buddha quotes and sayings that will enlighten your mind and show you how to live a mindful life.

4. “Hatred does not cease by hatred, but only by love this is the eternal rule.” 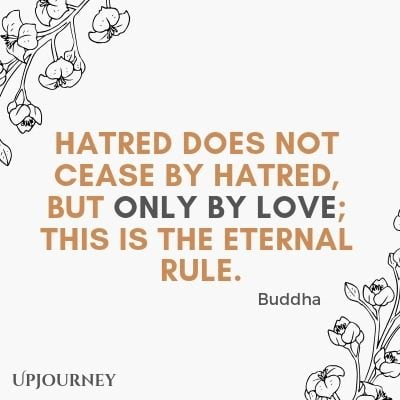 5. “Virtue is persecuted more by the wicked than it is loved by the good.”

1. “Just as treasures are uncovered from the earth, so virtue appears from good deeds, and wisdom appears from a pure and peaceful mind. To walk safely through the maze of human life, one needs the light of wisdom and the guidance of virtue.”

2. “There has to be evil so that good can prove its purity above it.”

3. “To keep the body in good health is a duty… otherwise we shall not be able to keep our mind strong and clear.”

4. “However many holy words you read, however many you speak, what good will they do you if you do not act on upon them?” 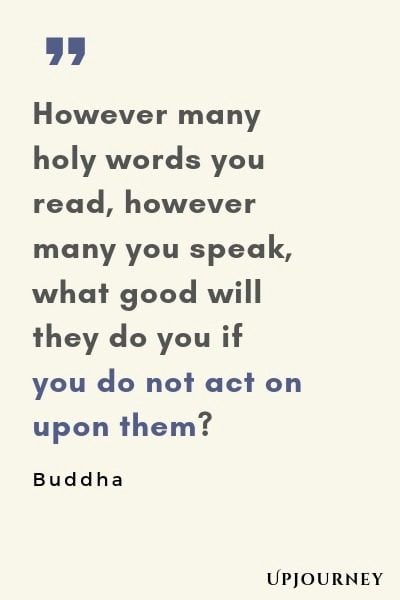 5. “The virtues, like the Muses, are always seen in groups. A good principle was never found solitary in any breast.”

6. “Charity bestowed upon those who are worthy of it is like good seed sown on a good soil that yields an abundance of fruits. But alms given to those who are yet under the tyrannical yoke of the passions are like seed deposited in a bad soil. The passions of the receiver of the alms choke, as it were, the growth of merits.”

7. “Whatever words we utter should be chosen with care for people will hear them and be influenced by them for good or ill.”

1. “Better than a thousand hollow words, is one word that brings peace.”

2. “Do not overrate what you have received, nor envy others. He who envies others does not obtain peace of mind.”

3. “To enjoy good health, to bring true happiness to one’s family, to bring peace to all, one must first discipline and control one’s own mind. If a man can control his mind he can find the way to Enlightenment, and all wisdom and virtue will naturally come to him.”

4. “Peace comes from within. Do not seek it without.”

5. “Those who are free of resentful thoughts surely find peace.” 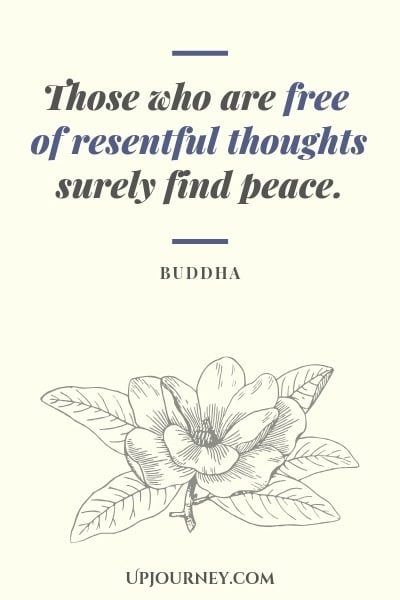 1. “To live a pure unselfish life, one must count nothing as one’s own in the midst of abundance.”

2. “To be idle is a short road to death and to be diligent is a way of life; foolish people are idle, wise people are diligent.”

3. “Just as a candle cannot burn without fire, men cannot live without a spiritual life.”

4. “Do not dwell in the past, do not dream of the future, concentrate the mind on the present moment.” 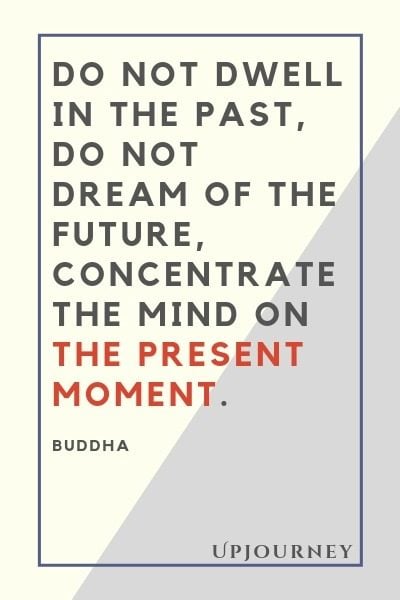 5. “The only real failure in life is not to be true to the best one knows.”

6. “Thousands of candles can be lighted from a single candle, and the life of the candle will not be shortened. Happiness never decreases by being shared.”

7. “Without health, life is not life; it is only a state of languor and suffering – an image of death.”

1. “Holding on to anger is like grasping a hot coal with the intent of throwing it at someone else you are the one who gets burned.”

2. “In a controversy the instant we feel anger we have already ceased striving for the truth, and have begun striving for ourselves.”

3. “It is better to conquer yourself than to win a thousand battles. Then the victory is yours. It cannot be taken from you, not by angels or by demons, heaven or hell.”

4. “When one has the feeling of dislike for evil when one feels tranquil, one finds pleasure in listening to good teachings when one has these feelings and appreciates them, one is free of fear.”

6. “Even death is not to be feared by one who has lived wisely.” 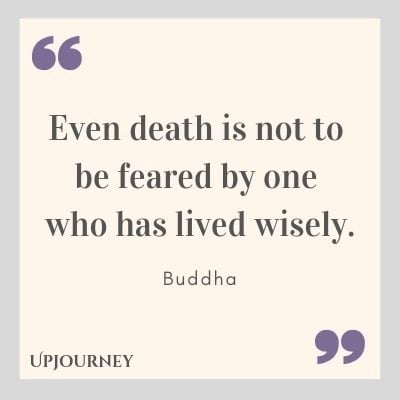 7. “The whole secret of existence is to have no fear. Never fear what will become of you, depend on no one. Only the moment you reject all help are you freed.”

1. “What is the appropriate behavior for a man or a woman in the midst of this world, where each person is clinging to his piece of debris? What’s the proper salutation between people as they pass each other in this flood?”

2. “We are shaped by our thoughts; we become what we think. When the mind is pure, joy follows like a shadow that never leaves.”

3. “Better than worshiping gods is obedience to the laws of righteousness.”

4. “He who gives away shall have real gain. He who subdues himself shall be free; he shall cease to be a slave of passions. The righteous man casts off evil, and by rooting out lust, bitterness, and illusion do we reach Nirvana.”

5. “There are only two mistakes one can make along the road to truth not going all the way, and not starting.”

7. “Three things cannot be long hidden: the sun, the moon, and the truth.” 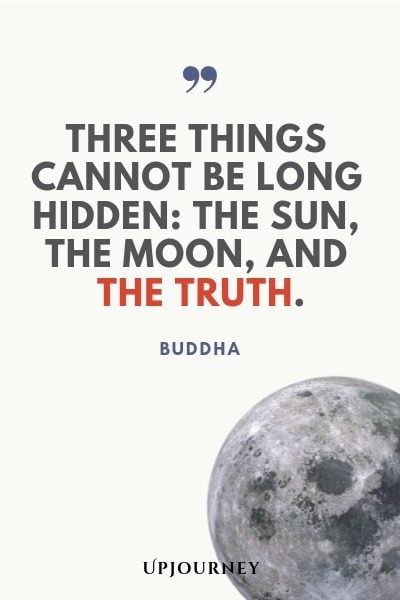 8. “With fools, there is no companionship. Rather than to live with men who are selfish, vain, quarrelsome, and obstinate, let a man walk alone.”

9. “In the sky, there is no distinction of east and west; people create distinctions out of their own minds and then believe them to be true.”

10. “A woman of the world is anxious to exhibit her form and shape, whether walking, standing, sitting, or sleeping. Even when represented as a picture, she desires to captivate with the charms of her beauty and, thus, to rob men of their steadfast heart.” 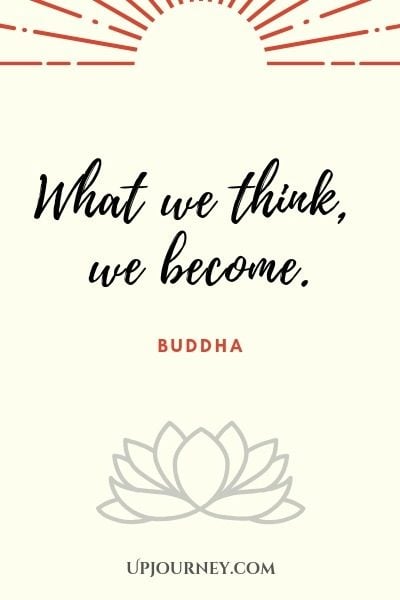 13. “There is nothing more dreadful than the habit of doubt. Doubt separates people. It is a poison that disintegrates friendships and breaks up pleasant relations. It is a thorn that irritates and hurts; it is a sword that kills.”

16. “No one saves us but ourselves. No one can and no one may. We ourselves must walk the path.”

17. “I was born into the world as the king of truth for the salvation of the world.”

18. “We are formed and molded by our thoughts. Those whose minds are shaped by selfless thoughts give joy when they speak or act. Joy follows them like a shadow that never leaves them.”

19. “The wise ones fashioned speech with their thought, sifting it as grain is sifted through a sieve.”

20. “I am not the first Buddha who came upon Earth, nor shall I be the last. In due time, another Buddha will arise in the world – a Holy One, a supremely enlightened One, endowed with wisdom in conduct, auspicious, knowing the universe, an incomparable leader of men, a master of angels and mortals.”

21. “The tongue like a sharp knife… Kills without drawing blood.”

22. “Chaos is inherent in all compounded things. Strive on with diligence.”

23. “The foolish man conceives the idea of ‘self.’ The wise man sees there is no ground on which to build the idea of ‘self;’ thus, he has a right conception of the world and well concludes that all compounds amassed by sorrow will be dissolved again, but the truth will remain.”

26. “Unity can only be manifested by the Binary. Unity itself and the idea of Unity are already two.”

27. “Work out your own salvation. Do not depend on others.” 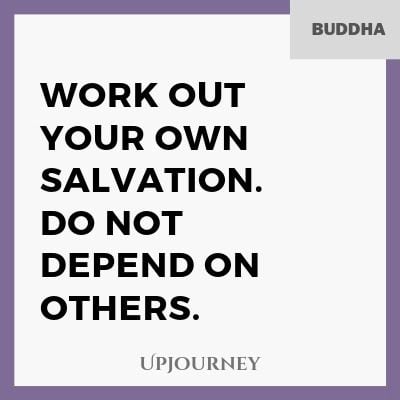 30. “Without health life is not life it is only a state of langour and suffering – an image of death.”

32. “He who walks in the eightfold noble path with unswerving determination is sure to reach Nirvana.”

33. “All wrong-doing arises because of mind. If mind is transformed can wrong-doing remain?” 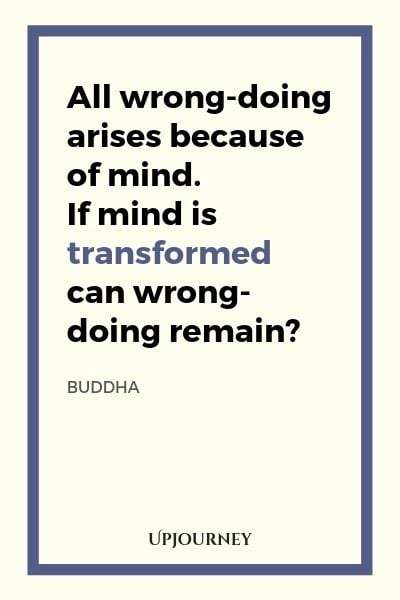 34. “The mind is everything. What you think you become.”

Buddha’s teachings resonate with a lot of people until this day. His pedagogy has touched many lives and will continue to live on to future generations. We hope these Buddha quotes bring you comfort and inner peace.

If you would like to know more about his life and teachings, we suggest you read, The Heart of the Buddha’s Teaching: Transforming Suffering into Peace, Joy, and Liberation by Thich Nhat Hanh, as well as other Buddhist Books to uncover the core concepts of Buddhist teachings.