Cesar Estrada Chavez, an American Latino labor and civil rights activist, was born in Arizona in 1927. In his early life, Chavez became a manual laborer and worked at the United States Navy for two years. After his work in the Navy, Chavez relocated to California, where he married his wife, Helen Chavez.

In California, Chavez worked as an apricot picker and a lumber handler at the General Box Company. There he befriended Fred Ross and Father Donald McDonnell, two social justice activists. With Ross, Chavez helped establish the Community Service Organization in San Jose. McDonnell also lent Chavez books, including a biography of Mahatma Gandhi, which introduced Chavez to non-violent protests.

Chavez and his family left San Jose and moved to Delano. With his wife, they discreetly gathered farmers to form an association. Chavez left the Community Service Organization and, together with Dolores Huerta, they founded UFW, or the United Farm Workers union. Through the UFW, Chavez organized non-violent protests and boycotts like the Salad Bowl Strike, which is the most massive farmworker strike in the history of the US. He also helped set up labor laws that secured the rights of farmworkers.

Besides his fight for labor rights, Chavez was also an ally of the gay community and against the Vietnam War. His birthday is a national commemorative day observed by many states in America every March 31. Chavez received many awards, including the Presidential Medal of Freedom.

Know more about the man who fought for the rights of farmworkers in America through some of the best and motivational Cesar Chavez quotes and sayings.

2. “In some cases, non-violence requires more militancy than violence.”

3. “Students must have initiative; they should not be mere imitators. They must learn to think and act for themselves – and be free.”

4. “When we are really honest with ourselves we must admit our lives are all that really belong to us. So it is how we use our lives that determines the kind of men we are.”

5. “Who gets the risks? The risks are given to the consumer, the unsuspecting consumer and the poor work force. And who gets the benefits? The benefits are only for the corporations, for the money makers.”

6. “We cannot seek achievement for ourselves and forget about progress and prosperity for our community… Our ambitions must be broad enough to include the aspirations and needs of others, for their sakes and for our own.”

7. “It is my deepest belief that only by giving our lives do we find life. I am convinced that the truest act of courage, the strongest act of manliness is to sacrifice ourselves for others in a totally non-violent struggle for justice.”

8. “Preservation of one’s own culture does not require contempt or disrespect for other cultures.”

9. “Since the Church is to be servant to the poor, it is our fault if that wealth is not channeled to help the poor in our world.”

10. “There is no such thing as defeat in non-violence.”

11. “It is possible to become discouraged about the injustice we see everywhere. But God did not promise us that the world would be humane and just. He gives us the gift of life and allows us to choose the way we will use our limited time on earth. It is an awesome opportunity.”

13. “The fight is never about grapes or lettuce. It is always about people.” 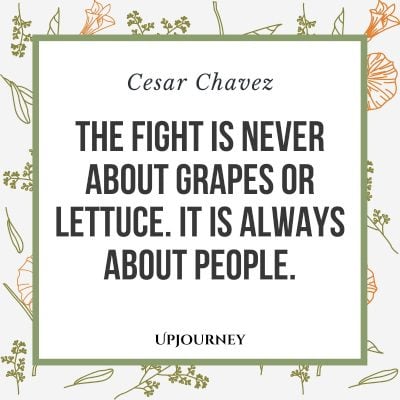 14. “We need to help students and parents cherish and preserve the ethnic and cultural diversity that nourishes and strengthens this community – and this nation.”

15. “When poor people get involved in a long conflict, such as a strike or a civil rights drive, and the pressure increases each day, there is a deep need for spiritual advice. Without it, we see families crumble, leadership weaken, and hard workers grow tired.”

16. “There is no law for farm labor organizing, save the law of the jungle.”

18. “From the depth of need and despair, people can work together, can organize themselves to solve their own problems and fill their own needs with dignity and strength.”

19. “Though many of the poor have come to see the affluent middle class as its enemy, that class actually stands between the poor and the real powers in this society – the administrative octopus with its head in Washington, the conglomerates, the military complex.”

20. “Real education should consist of drawing the goodness and the best out of our own students. What better books can there be than the book of humanity?”

21. “We draw our strength from the very despair in which we have been forced to live. We shall endure.”

22. “What we do know absolutely is that human lives are worth more than grapes and that innocent-looking grapes on the table may disguise poisonous residues hidden deep inside where washing cannot reach.” 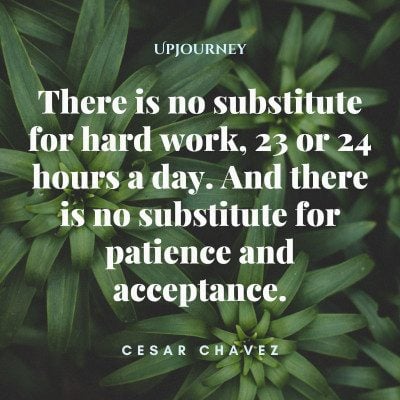 24. “There are vivid memories from my childhood – what we had to go through because of low wages and the conditions, basically because there was no union. I suppose, if I wanted to be fair, I could say that I’m trying to settle a personal score. I could dramatize it by saying that I want to bring social justice to farm workers.”

25. “We farm workers are closest to food production. We were the first to recognize the serious health hazards of agriculture pesticides to both consumers and ourselves.”

26. “You are never strong enough that you don’t need help.”