Henry Charles Bukowski was a prolific German-born American novelist, poet, and short story writer famous for his realistic and poetic writings portraying the economic, social, and cultural ambiance of his home city of Los Angeles.

Bukowski wrote six novels, hundreds of short stories, thousands of poems, and ultimately publishing over 60 books. His works were so famous that he became one of the best-known American authors.

However, it wasn’t always easy for him. Growing up in a family with an abusive father, Bukowski grew up as a shy and socially withdrawn teenager. Nevertheless, he said the undeserved pain and depression gave him an inspiration for his writings.

His stories mostly tackled relationships with women, alcohol, the lives of underprivileged Americans, the drudgery of work as well as the act of writing. His works often revolve around the life of his highly stylized alter-ego, Henry Chinaski.

Here are the top 51 Charles Bukowski quotes and sayings that explores his views about life, love, writing, and so much more.

2. “I kept writing not because I felt I was so good, but because I felt they were so bad, including Shakespeare, all those. The stilted formalism, like chewing cardboard.”

3. “I have no definite talent or trade, and how I stay alive is largely a matter of magic.”

4. “Even though I write about the human race, the further away from them, the better I feel. Two miles is great; two thousand miles is beautiful.”

5. “When I say that basically writing is a hard hustle, I don’t mean that it is a bad life if one can get away with it. It’s the miracle of miracles to make a living by the typer.”

6. “I have not worked out my poems with a careful will, falling rather on the haphazard and blind formulation of wordage, a more flowing concept, in a hope for a more new and lively path. I do personalize at times, but this only for the grace and elan of the dance.”

7. “Most poets are young simply because they have not been caught up. Show me an old poet, and I’ll show you, more often than not, either a madman or a master… it’s when you begin to lie to yourself in a poem in order simply to make a poem that you fail. That is why I do not rework poems.”

8. “When I write, when I’m going hot, I don’t want to write more than four hours in a row. After that, you’re pushing it.”

9. “Writers have to put up with this editor thing; it is ageless and eternal and wrong.”

10. “I am a dangerous man when turned loose with a typewriter.” 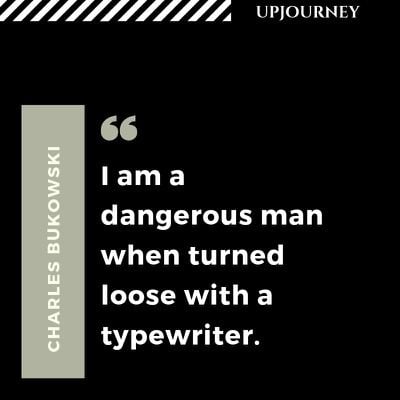 11. “An intellectual says a simple thing in a hard way. An artist says a hard thing in a simple way.”

1. “I used to live on one candy bar a day – it cost a nickel. I always remember the candy bar was called Payday. That was my payday. And that candy bar tasted so good, at night I would take one bite, and it was so beautiful.”

2. “To not to have entirely wasted one’s life seems to be a worthy accomplishment, if only for myself.”

4. “We are here to laugh at the odds and live our lives so well that Death will tremble to take us.” 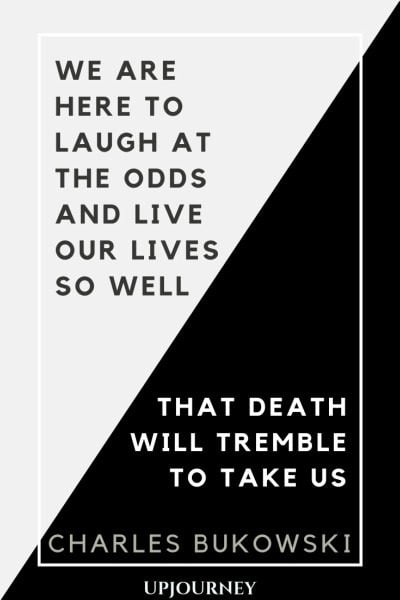 6. “There will always be something to ruin our lives, it all depends on what or which finds us first. We are always ripe and ready to be taken.”

7. “My days, my years, my life has seen up and downs, lights, and darknesses. If I wrote only and continually of the ‘light’ and never mentioned the other, then as an artist, I would be a liar.”

8. “Some people never go crazy, What truly horrible lives they must live.”

1. “It’s possible to love a human being if you don’t know them too well.” 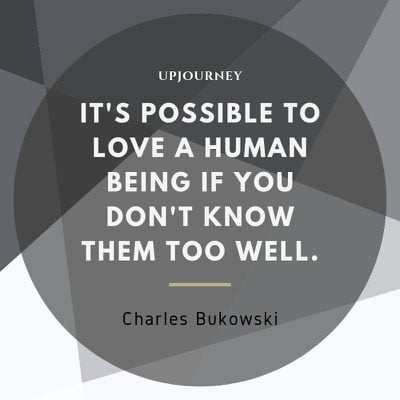 2. “We’re all going to die, all of us; what a circus! That alone should make us love each other, but it doesn’t. We are terrorized and flattened by trivialities. We are eaten up by nothing.”

3. “The male, for all his bravado and exploration, is the loyal one, the one who generally feels love. The female is skilled at betrayal and torture and damnation.”

4. “My love is a hummingbird sitting that quiet moment on the bough, as the same cat crouches.”

1. “I don’t like the clean-shaven boy with the necktie and the good job. I like desperate men, men with broken teeth and broken minds and broken ways. They interest me. They are full of surprises and explosions.”

2. “Almost everybody is born a genius and buried an idiot.”

3. “If you want to know who your friends are, get yourself a jail sentence.”

4. “I can relax with bums because I am a bum. I don’t like laws, morals, religions, rules. I don’t like to be shaped by society.”

6. “Show me a man who lives alone and has a perpetually clean kitchen, and 8 times out of 9 I’ll show you a man with detestable spiritual qualities.”

8. “What my character is or how many jails I have lounged in, or wards or walls or wassails, how many lonely-heart poetry readings I have dodged, is beside the point. A man’s soul or lack of it will be evident with what he can carve upon a white sheet of paper.”

10. “The free soul is rare, but you know it when you see it – basically because you feel good, very good when you are near or with them.” 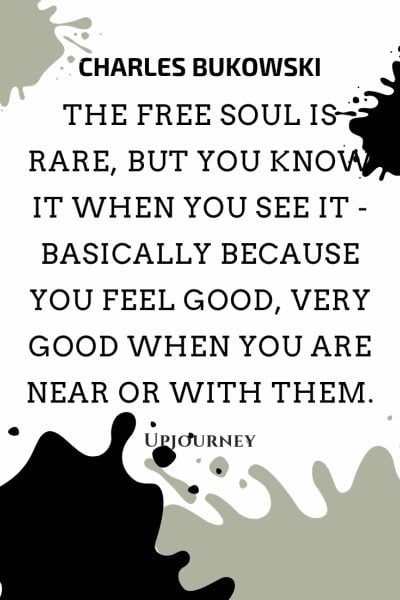 12. “The more cats you have, the longer you live. If you have a hundred cats, you’ll live 10 times longer than if you have 10. Someday this will be discovered, and people will have a thousand cats and live forever. It’s truly ridiculous.”

13. “Between the ages of fifteen and twenty-four, I must have read a whole library.”

15. “The female loves to play man against man. And if she is in a position to do it, there is not one who will resist.”

16. “Having a bunch of cats around is good. If you’re feeling bad, you just look at the cats, you’ll feel better because they know that everything is just as it is. There’s nothing to get excited about. They just know. They’re saviors.”

17. “The thing that I fear discriminating against is humor and truth.” 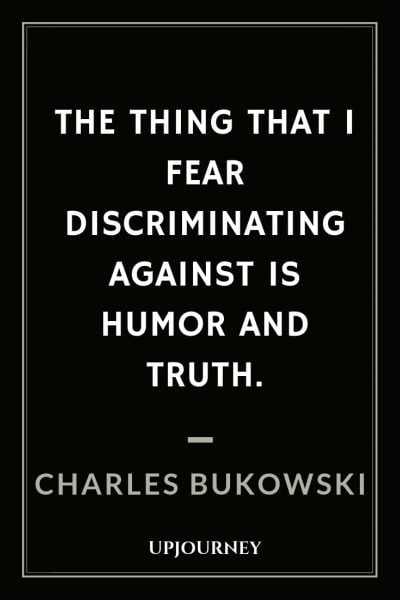 19. “There are women who can make you feel more with their bodies and their souls, but these are the exact women who will turn the knife into you right in front of the crowd. Of course, I expect this, but the knife still cuts.”

20. “If you’re losing your soul and you know it, then you’ve still got a soul left to lose.”

22. “A cat is only itself, representative of the strong forces of life that won’t let go.”

23. “Censorship is the tool of those who have the need to hide actualities from themselves and from others. Their fear is only their inability to face what is real, and I can’t vent any anger against them; I only feel this appalling sadness. Somewhere in their upbringing, they were shielded against the total facts of our existence.”

25. “You begin saving the world by saving one man at a time; all else is grandiose romanticism or politics.”

26. “Genius might be the ability to say a profound thing in a simple way.” 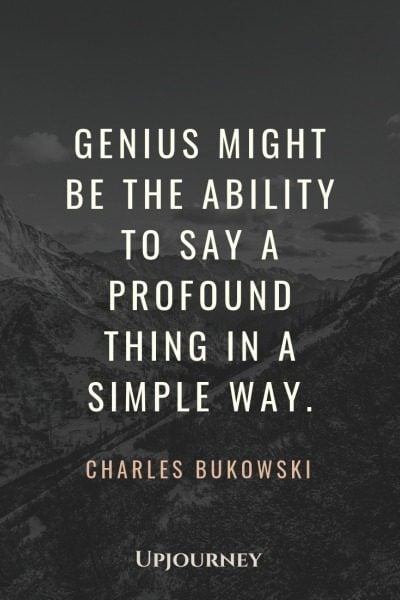 27. “We have wasted History like a bunch of drunks shooting dice back in the men’s crapper of the local bar.”

If you would like to learn more about the works of Charles Bukowski, we would suggest you read Essential Bukowski: Poetry.