Charles John Huffam Dickens, popularly known as Charles Dickens, was a talented writer and social critic who lived during the 19th century and is still considered as one of the prominent novelists in the history of literature. He conceived some of the world’s well-loved and best-known fictional characters.

Despite his lack of formal and standard education, he wrote five novellas, 15 novels, hundreds of non-fiction articles and short stories, and edited a weekly journal for almost 20 years. He also performed readings and lectured extensively, actively campaigned for children’s rights to education and many other social reforms.

Dickens’s literary breakthrough started with the publication of The Pickwick Papers (1836). Within a few years, he had already become an international literary figure, renowned for his satire, humor, and keen perception of character and society. His other masterpieces include David Copperfield, Great Expectations, A Tale of Two Cities, Oliver Twist, Hard Times, and A Christmas Carol among many others.

Fellow writers have praised Dickens for his comedy, realism, unique characterizations, prose style, and social criticism. Many of his books later became part of the school and college curriculum which immortalized Dickens in the hearts and minds of many people.

Here are some of the most famous Charles Dickens quotes and saying that explores his views regarding life, love, charity, and many more. 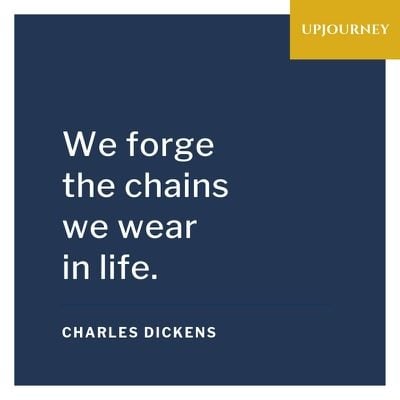 3. “There is nothing so strong or safe in an emergency of life as the simple truth.”

4. “It is a melancholy truth that even great men have their poor relations.”

5. “Life is made of ever so many partings welded together.”

1. “There are strings in the human heart that had better not be vibrated.”

2. “The pain of parting is nothing to the joy of meeting again.”

3. “A loving heart is the truest wisdom.” 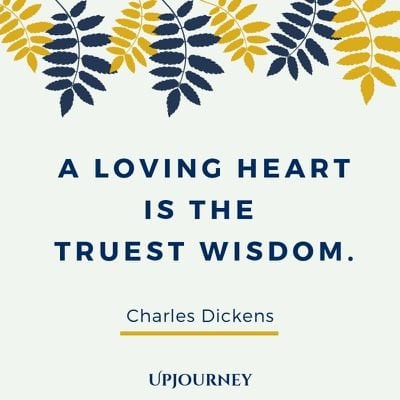 5. “To conceal anything from those to whom I am attached, is not in my nature. I can never close my lips where I have opened my heart.”

7. “This love that makes the world go round, my baby.”

8. “The whole difference between construction and creation is exactly this: that a thing constructed can only be loved after it is constructed; but a thing created is loved before it exists.”

1. “Charity begins at home, and justice begins next door.”

2. “There are not a few among the disciples of charity who require, in their vocation, scarcely less excitement than the votaries of pleasure in theirs.” 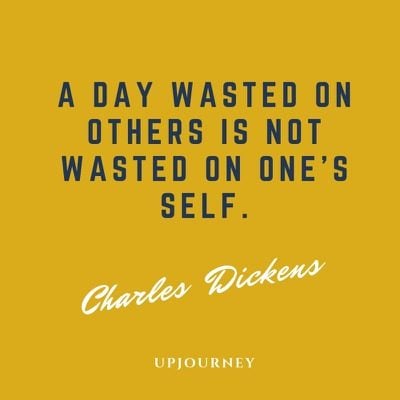 4. “The civility which money will purchase, is rarely extended to those who have none.”

5. “No one is useless in this world who lightens the burden of it to anyone else.”

2. “Papa, potatoes, poultry, prunes, and prism, are all very good words for the lips.”

3. “He had but one eye and the pocket of prejudice runs in favor of two.”

4. “It is a pleasant thing to reflect upon, and furnishes a complete answer to those who contend for the gradual degeneration of the human species, that every baby born into the world is a finer one than the last.”

5. “I will honor Christmas in my heart, and try to keep it all the year.” 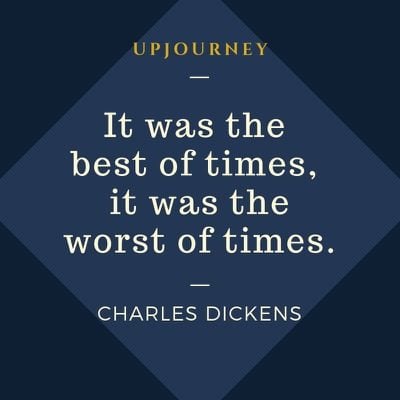 9. “Oh the nerves, the nerves; the mysteries of this machine called man! Oh, the little that unhinges it, poor creatures that we are!”

10. “I have known a vast quantity of nonsense talked about bad men not looking you in the face. Don’t trust that conventional idea. Dishonesty will stare honesty out of countenance any day in the week if there is anything to be got by it.”

11. “Send forth the child and childish man together, and blush for the pride that libels our own old happy state, and gives its title to an ugly and distorted image.”

12. “Home is a name, a word, it is a strong one; stronger than magician ever spoke, or spirit ever answered to, in the strongest conjuration.”

13. “It opens the lungs, washes the countenance, exercises the eyes, and softens down the temper; so cry away.”

14. “This is a world of action, and not for moping and droning in.” 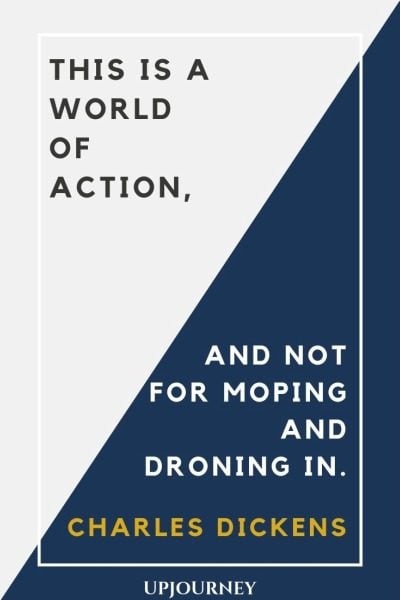 15. “It was one of those March days when the sun shines hot and the wind blows cold: when it is summer in the light, and winter in the shade.”

16. “Bring in the bottled lightning, a clean tumbler, and a corkscrew.”

17. “Most men are individuals no longer so far as their business, its activities, or its moralities are concerned. They are not units but fractions.”

18. “Let us be moral. Let us contemplate existence.”

19. “If there were no bad people, there would be no good lawyers.”

20. “There are dark shadows on the earth, but its lights are stronger in the contrast.”

21. “There are only two styles of portrait painting; the serious and the smirk.”

22. “Subdue your appetites, my dears, and you’ve conquered human nature.”

24. “The men who learn endurance, are they who call the whole world, brother.” 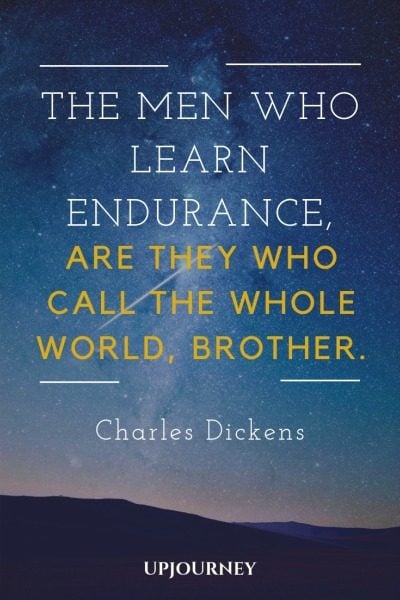 25. “Cows are my passion. What I have ever sighed for has been to retreat to a Swiss farm, and live entirely surrounded by cows – and China.”

26. “When a man bleeds inwardly, it is a dangerous thing for himself; but when he laughs inwardly, it bodes no good to other people.”

28. “Fan the sinking flame of hilarity with the wing of friendship, and pass the rosy wine.”

29. “That sort of half sigh, which, accompanied by two or three slight nods of the head, is pity’s small change in general society.”

30. “May not the complaint, that common people are above their station, often take its rise in the fact of uncommon people being below theirs?”

31. “There are books of which the backs and covers are by far the best parts.”

33. “It’s my old girl that advises. She has the head. But I never own to it before her. Discipline must be maintained.”

34. “Reflect upon your present blessings of which every man has many – not on your past misfortunes, of which all men have some.”

35. “The one great principle of English law is to make business for itself.”

37. “I never could have done what I have done without the habits of punctuality, order, and diligence, without the determination to concentrate myself on one subject at a time.”

38. “Although a skillful flatterer is a most delightful companion if you have him all to yourself, his taste becomes very doubtful when he takes to complimenting other people.”

39. “An idea, like a ghost, must be spoken to a little before it will explain itself.”

40. “The first rule of business is: Do other men for they would do you.” 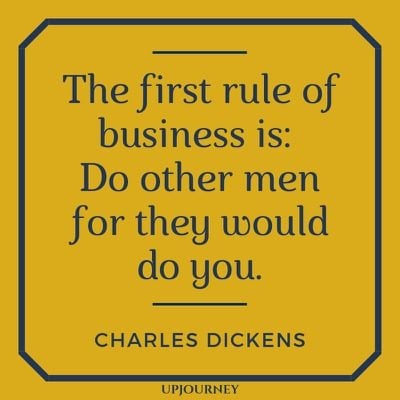 41. “Nature gives to every time and season some beauties of its own; and from morning to night, as from the cradle to the grave, it is but a succession of changes so gentle and easy that we can scarcely mark their progress.”

42. “Happy, happy Christmas, that can win us back to the delusions of our childhood days, recall to the old man the pleasures of his youth, and transport the traveler back to his own fireside and quiet home!”

43. “Regrets are the natural property of grey hairs.”

44. “You don’t carry in your countenance a letter of recommendation.”

45. “A wonderful fact to reflect upon, that every human creature is constituted to be that profound secret and mystery to every other.”

46. “Great men are seldom over-scrupulous in the arrangement of their attire.”

47. “The age of chivalry is past. Bores have succeeded to dragons.”

48. “Anything for the quick life, as the man said when he took the situation at the lighthouse.”

49. “Dignity, and even holiness too, sometimes, are more questions of coat and waistcoat than some people imagine.” 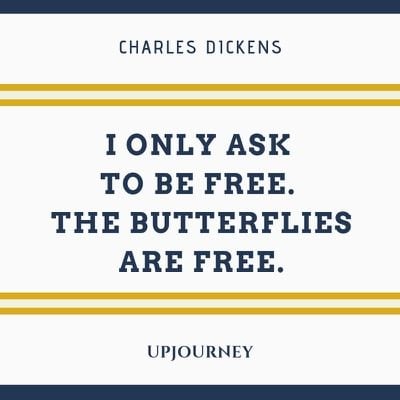 51. “Electric communication will never be a substitute for the face of someone who with their soul encourages another person to be brave and true.”

52. “Any man may be in good spirits and good temper when he’s well dressed. There ain’t much credit in that.”

53. “Vices are sometimes only virtues carried to excess!”

55. “In the little world in which children have their existence, whosoever brings them up, there is nothing so finely perceived and so finely felt, as injustice.”