Cornelia Arnolda Johanna ten Boom, publicly known as Corrie ten Boom, was a Dutch watchmaker and a writer who worked with her family members to help a lot of Jews escape the Nazis by hiding them in her home during World War II.

Her most famous book titled “The Hiding Place” which was published in 1971 is a biography that narrates the story of her family’s attempts and efforts during that time.

Born to a working-class family in Amsterdam, Netherlands, she was the youngest child of a watchmaker and jeweler. She later trained to be a watchmaker and even became the first woman licensed as a watchmaker in The Netherlands. Aside from working in her father’s shop, Corrie also organized a youth club for teenage girls, which rendered classes in sewing, handicrafts, as well as the performing arts.

The ten Boom family were Christians, and their faith motivated them to serve their society by offering food, shelter, and money to those in need.

When the Nazis invaded the Netherlands in May 1940, Corrie and her family opened their home to refugees despite the police headquarters being only half a block away from their house. Being a devoted reader of the Old Testament, Casper ten Boom (Corrie’s father) believed that the Jews were the “chosen people,” and welcomed them in their home. He even said, “In this household, God’s people are always welcome.”

Unfortunately, a Dutch informant told the Nazis about the ten Booms’ work, and they arrested the entire ten Boom family. Due to her bravery and courage, Corrie was given several awards throughout her remaining life.

Here are some of the most memorable Corrie Ten Boom quotes and sayings that explores her thoughts and views about life, fear, forgiveness, and more.

2. “Worry does not empty tomorrow of its sorrow. It empties today of its strength.”

3. “Worry is a cycle of inefficient thoughts whirling around a center of fear.”

4. “Never be afraid to trust an unknown future to a known God.” 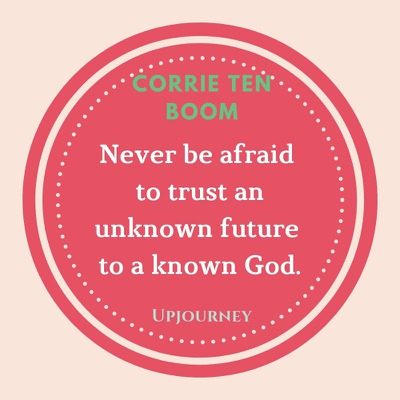 5. “Forgiveness is an act of the will, and the will can function regardless of the temperature of the heart.”

6. “The measure of a life, after all, is not its duration, but its donation.”

7. “Memories are the key not to the past, but to the future.”

8. “When a train goes through a tunnel and it gets dark, you don’t throw away the ticket and jump off. You sit still and trust the engineer.”

9. “Discernment is God’s call to intercession, never to faultfinding.”

11. “The first step on the way to victory is to recognize the enemy.”

If you would like to know more about the life story of the brilliant Corrie Ten Boom, we would suggest you read her book The Hiding Place.