David Foster Wallace was an American writer and university instructor in creative writing. Wallace was considered one of the most influential and innovative writers of the last twenty years by Los Angeles Times’ David Ulin.

His novel ‘Infinite Jest’ made it to the list of Time magazine as one of the 100 best English-language books published between 1923 to 2005. Aside from that, his last novel ‘The Pale King’ was even a finalist for the Pulitzer Prize for Fiction in 2012.

His words and writings resonate up until this day. We have listed below the most memorable David Foster Wallace quotes and sayings about culture, literature, media, and much more.

2. “This might be one way to start talking about differences between the early postmodern writers of the fifties and sixties and their contemporary descendants.”

3. “I often think I can see it in myself and in other young writers, this desperate desire to please coupled with a kind of hostility to the reader.”

4. “We’re not keen on the idea of the story sharing its valence with the reader. But the reader’s own life ‘outside’ the story changes the story.”

5. “It looks like you can write a minimalist piece without much bleeding. And you can. But not a good one.”

6. “The reader becomes God, for all textual purposes. I see your eyes glazing over, so I’ll hush.”

8. “To be willing to sort of die in order to move the reader, somehow. Even now I’m scared about how sappy this will look in print, saying this.”

9. “I just think that fiction that isn’t exploring what it means to be human today isn’t art.” 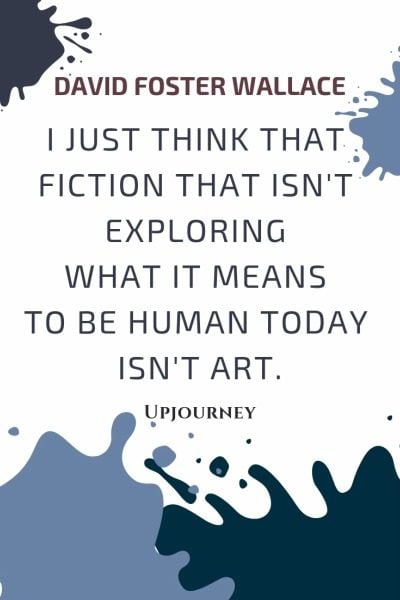 1. “Nuclear weapons and TV have simply intensified the consequences of our tendencies, upped the stakes.”

2. “What TV is extremely good at – and realize that this is ‘all it does’ – is discerning what large numbers of people think they want and supplying it.”

3. “I think TV promulgates the idea that good art is just art which makes people like and depend on the vehicle that brings them the art.” 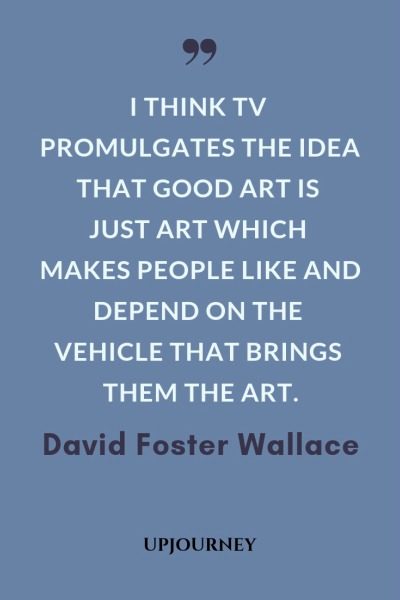 4. “TV’s ‘real’ agenda is to be ‘liked,’ because if you like what you’re seeing, you’ll stay tuned. The TV is completely unabashed about this; it’s its sole reason.”

1. “This is so American, man: either make something your God and cosmos and then worship it, or else kill it.”

2. “For these cultures, getting rid of the pain without addressing the deeper cause would be like shutting off a fire alarm while the fire’s still going.” 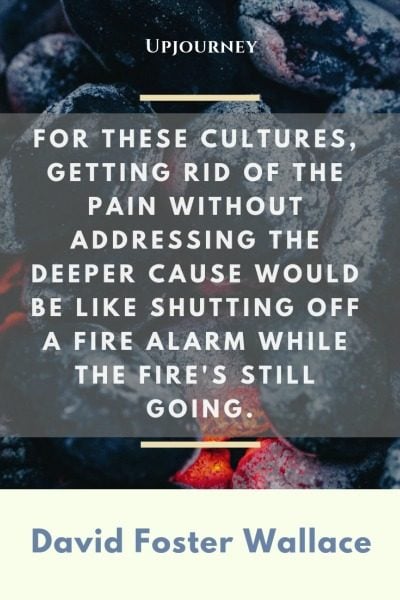 3. “Rap’s conscious response to the poverty and oppression of U.S. blacks is like some hideous parody of sixties black pride.”

1. “The other half is to dramatize the fact that we still ‘are’ human beings, now. Or can be.”

2. “One of the things that makes Wittgenstein a real artist to me is that he realized that no conclusion could be more horrible than solipsism.”

3. “We’re kind of wishing some parents would come back. And of course we’re uneasy about the fact that we wish they’d come back – I mean, what’s wrong with us?”

4. “It seems important to find ways of reminding ourselves that most ‘familiarity’ is meditated and delusive.”

5. “This is nourishing, redemptive; we become less alone inside.” 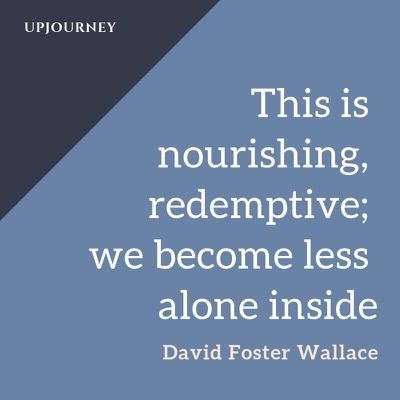 6. “The great thing about irony is that it splits things apart, gets up above them so we can see the flaws and hypocrisies and duplicates.”

7. “Pleasure becomes a value, a teleological end in itself. It’s probably more Western than the U.S. per se.”

8. “The problem is that once the rules of art are debunked, and once the unpleasant realities the irony diagnoses are revealed and diagnosed, ‘then’ what do we do?”

9. “This diagnosis can be done in about two lines. It doesn’t engage anybody.”

10. “The interesting thing is why we’re so desperate for this anesthetic against loneliness.”

If you would like to know more about the works of David Foster Wallace, we would suggest you read one of his best-selling novels Infinite Jest.