Denzel Hayes Washington Jr., popularly known as Denzel Washington, is one of Hollywood’s most esteemed and respected actor, producer, and director.

Due to his incredible talent in acting, he has received one Tony Award, two Golden Globe awards, and two Academy Awards: Best Actor for his role as a corrupt detective in the crime thriller Training Day (2001) and Best Supporting Actor for the historical war drama film Glory (1989).

However, it wasn’t always like this for the son of a Pentecostal minister. Coming from a rough childhood, Washington struggled through much of his schooling that they suggested he take a break — but he didn’t. Instead, he never gave up and went on to become one of the most notable names in Hollywood.

Washington has received much critical acclaim for his work since the 1980s, including his portrayals of real-life figures, such as Muslim minister and human rights activist Malcolm X in the movie titled “Malcolm X” (1992), football coach Herman Boone in the movie “Remember the Titans” (2000), and drug kingpin Frank Lucas in the movie “American Gangster” (2007) among many others.

Aside from starring in various movies, Washington also directed films. His third film titled “Fences” (2016), in which he also starred was nominated for the 2017 Academy Award for Best Picture and Best Actor.

We have listed some of the most inspiring Denzel Washington quotes and sayings that will motivate you to work hard and follow your passion.

1. “When I was a child I thought I saw an angel. It had wings and kinda looked like my sister. I opened the door so some light could come into the room, and it sort of faded away. My mother said it was probably my Guardian Angel.”

2. “The poorest people are the sweetest people.”

3. “I never really had the classic struggle. I had faith.” 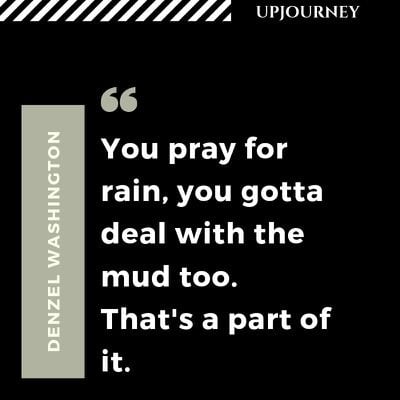 6. “You have to grab moments when they happen. I like to improvise and ad lib.”

8. “If you have an enemy, then learn and know your enemy, don’t just be mad at him or her.”

1. “Any good piece of material like Shakespeare ought to be open to reinterpretation.”

2. “One good thing about acting in the film is that its good therapy.”

5. “Acting is just a way of making a living, the family is life.” 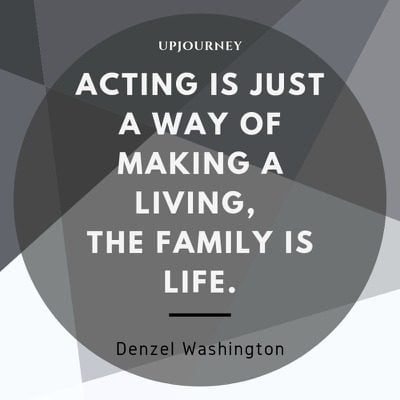 6. “I don’t concern myself with an award. I’d been to the party enough times to know it really didn’t matter.”

8. “I say luck is when an opportunity comes along and you’re prepared for it.”

9. “My mother used to tell me man gives the award, God gives the reward. I don’t need another plaque.”

10. “Black or white good parts are hard to come by. A good actor with a good opportunity has a shot; without the opportunity, it doesn’t matter how good you are.”

12. “You don’t know when you’re being watched. That’s one of the weird things about celebrity. It’s my least favorite part of acting, celebrity.” 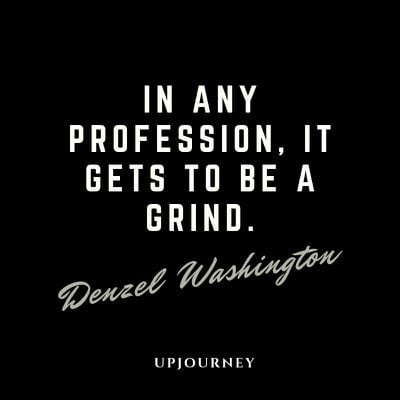 14. “I had a lot of success from the start. I never really was tested for long periods of time. I got my first professional job while I was a senior in college. I signed with the William Morris Agency before I graduated.”

15. “Where I think the most work needs to be done is behind the camera, not in front of it.”

18. “The last few years I’ve been saying I was ready to quit. It wasn’t that interesting to me. Now that I’m directing, it’s all new again.”

19. “I’ve worked in a factory. I was a garbage man. I worked in the post office. It’s not that long ago. I like to think that I’m just a regular guy.”

2. “When I did A Soldier’s Story, I was very young and green and thought I knew everything-now I know I know everything!”

3. “I wasn’t allowed to go to movies when I was a kid; my father was a minister. 101 Dalmatians and King of Kings, that was the extent of it.”

4. “My role 14 years ago in Richard III – that was the first time I played a bad guy and learned a lot about it – they have all the fun!”

5. “Everybody has a job to do. There are people in Iraq on both sides of this war who do what they do for religious reasons, and they feel with God on their side. Some people are good at annihilating people. Maybe that’s their gift.”

6. “If I am a cup maker, I’m interested in making the best cup I possibly can. My effort goes into that cup, not what people think about it.” 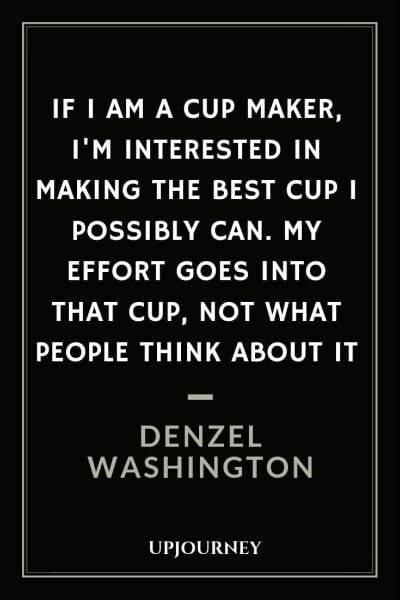 7. “Meryl and Katharine Hepburn are probably the two greatest actresses of this and the last century.”

8. “I think the bottom of the totem pole is African-American women or women of color. I think they get the least opportunities in Hollywood.”

9. “I played Othello, but I didn’t sit around thinking how Laurence Olivier did it when he played it. That wouldn’t do me any good.”

10. “I made a commitment to completely cut out drinking and anything that might hamper me from getting my mind and body together. And the floodgates of goodness have opened upon me – spiritually and financially.”

12. “Luck is where opportunity meets preparation.” 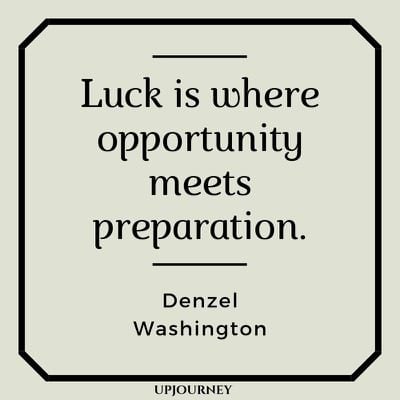 13. “My mother never gave up on me. I messed up in school so much they were sending me home, but my mother sent me right back.”

14. “Dakota Fanning is a child, but she is a wonderful actor. I don’t know what a child actor is. She’s an actor who’s a child.”

15. “When people protest and are upset with a movie, it becomes a big hit. They hated Passion of The Christ, it worked out pretty well for the box office. So let’s get that going.”

If you want to learn more about the life of the incredible Denzel Washington, we would suggest you read A Hand To Guide Me which he wrote to share his personal story and the guiding hands who helped mold his life.