Dietrich Bonhoeffer was a German theologian, pastor, and founder of the Confessing Church. He is known for his theological works and for his staunch opposition to the Nazi regime, which ultimately led to his execution on April 9, 1945.

In 1943, Bonhoeffer was arrested by the Gestapo and imprisoned for a year and a half. He continued his theological work and religious outreach to his fellow prisoners and guards. Bonhoeffer was awaiting his trial, but after a failed assassination attempt of Adolf Hitler, he was quickly sentenced to die by hanging.

Bonhoeffer’s death greatly influenced and inspired Christian ideologies like Martin Luther King Jr. and the US Civil Rights Movement. Many of his letters and writings were translated and published posthumously.

We have collected some of the best Dietrich Bonhoeffer quotes and sayings that reveal his views on religion, God, politics, and many more.

1. “A god who let us prove his existence would be an idol.”

2. “It is very easy to overestimate the importance of our own achievements in comparison with what we owe others.”

4. “Silence in the face of evil is itself evil: God will not hold us guiltless. Not to speak is to speak. Not to act is to act.” 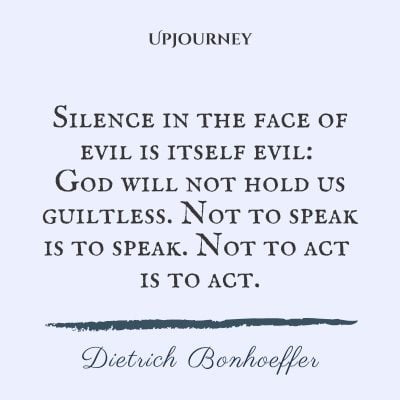 6. “To endure the cross is not tragedy; it is the suffering which is the fruit of an exclusive allegiance to Jesus Christ.”

8. “We must be ready to allow ourselves to be interrupted by God.”

9. “Politics are not the task of a Christian.”

10. “The test of the morality of a society is what it does for its children.”

11. “It is the nature, and the advantage, of strong people that they can bring out the crucial questions and form a clear opinion about them. The weak always have to decide between alternatives that are not their own.”

12. “We are not to simply bandage the wounds of victims beneath the wheels of injustice, we are to drive a spoke into the wheel itself.”

13. “The ultimate test of a moral society is the kind of world that it leaves to its children.” 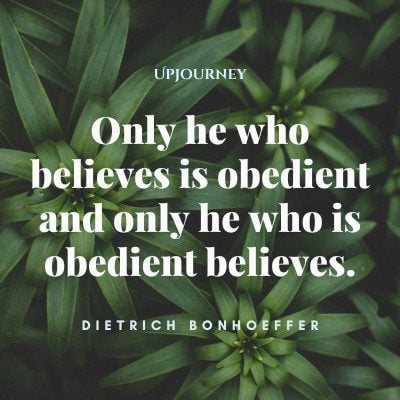 16. “Gratitude changes the pangs of memory into a tranquil joy.”

17. “If you board the wrong train, it is no use running along the corridor in the other direction.”

18. “Human love has little regard for the truth. It makes the truth relative, since nothing, not even the truth, must come between it and the beloved person.”

19. “One act of obedience is better than one hundred sermons.”

20. “There is meaning in every journey that is unknown to the traveler.”

21. “The essence of optimism is that it takes no account of the present, but it is a source of inspiration, of vitality and hope where others have resigned; it enables a man to hold his head high, to claim the future for himself and not to abandon it to his enemy.”

If you’d like to read some of Dietrich Bonhoeffer’s teachings, we suggest you read his book Life Together.