Edgar Allan Poe was a short-story writer, poet, literary critic, and editor. He is widely known for his significant contributions to American literature like his masterpieces “The Tell-tale Heart,” “The Raven,” and “Annabel Lee” among many others.

His transformation of the horror genre with his tales containing psychological depth and insights not previously read in the genre is recognized by many in the literary community.

Poe’s stories are born purely out of his deep imagination. However, he also drew from the events of his life, which is nothing short of dark and mysterious. Poe was 40 years old when he passed away in 1849, and until today, the cause of his death is unknown.

We have compiled some of the memorable Edgar Allan Poe quotes that explore his views on love, life, dreams, and writing, among other things.

1. “There is something in the unselfish and self-sacrificing love of a brute, which goes directly to the heart of him who has had frequent occasion to test the paltry friendship and gossamer fidelity of mere Man.”

2. “We loved with a love that was more than love.” 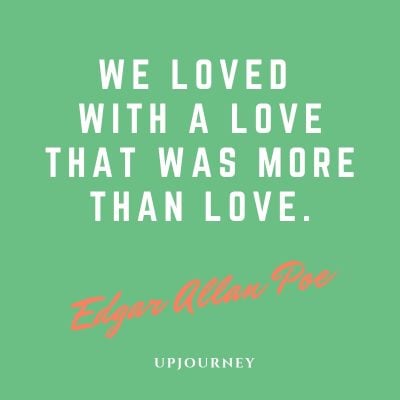 3. “That pleasure which is at once the most pure, the most elevating and the most intense, is derived, I maintain, from the contemplation of the beautiful.”

1. “Experience has shown, and a true philosophy will always show, that a vast, perhaps the larger portion of the truth arises from the seemingly irrelevant.”

2. “The boundaries which divide Life from Death are at best shadowy and vague. Who shall say where the one ends, and where the other begins?”

3. “Man’s real life is happy, chiefly because he is ever expecting that it soon will be so.” 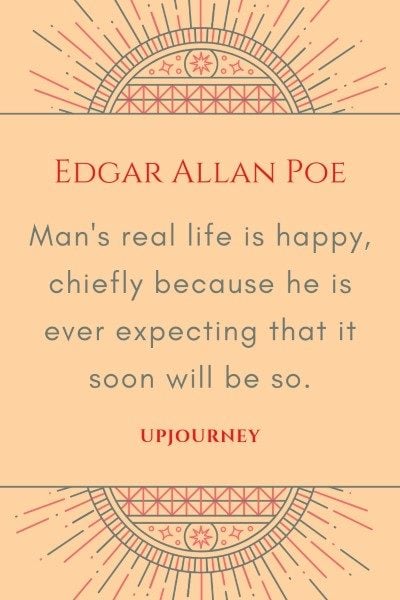 4. “If you wish to forget anything on the spot, make a note that this thing is to be remembered.”

3. “The ninety and nine are with dreams, content but the hope of the world made new, is the hundredth man who is grimly bent on making those dreams come true.”

4. “It is by no means an irrational fancy that, in a future existence, we shall look upon what we think our present existence, as a dream.”

5. “The ninety and nine are with dreams, content but the hope of the world made new, is the hundredth man who is grimly bent on making those dreams come true.”

6. “They who dream by day are cognizant of many things which escape those who dream only by night.” 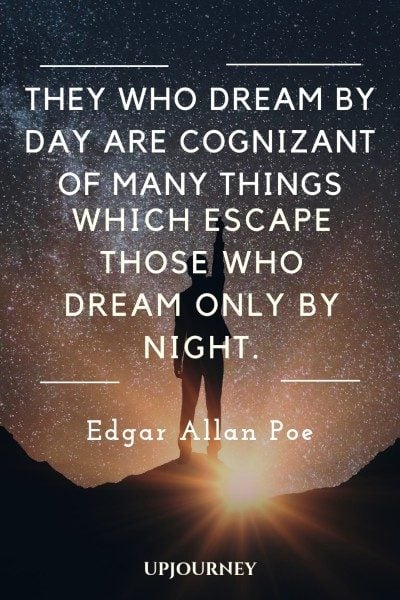 7. “Deep into that darkness peering, long I stood there, wondering, fearing, doubting, dreaming dreams no mortal ever dared to dream before.”

1. “There are few cases in which mere popularity should be considered a proper test of merit; but the case of song-writing is, I think, one of the few.”

2. “In criticism I will be bold, and as sternly, absolutely just with friend and foe. From this purpose nothing shall turn me.”

4. “With me poetry has not been a purpose, but a passion.”

5. “The rudiment of verse may, possibly, be found in the spondee.”

6. “I would define, in brief, the poetry of words as the rhythmical creation of Beauty.”

7. “Poetry is the rhythmical creation of beauty in words.” 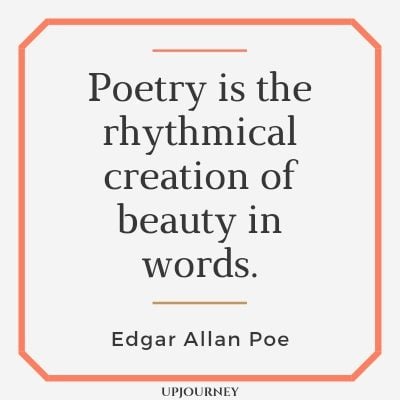 8. “Words have no power to impress the mind without the exquisite horror of their reality.”

1. “That man is not truly brave who is afraid either to seem or to be, when it suits him, a coward.”

2. “I have no faith in human perfectibility. I think that human exertion will have no appreciable effect upon humanity. Man is now only more active – not more happy – nor more wise, than he was 6000 years ago.”

3. “I have great faith in fools; self-confidence my friends call it.”

4. “Science has not yet taught us if madness is or is not the sublimity of the intelligence.”

5. “There is an eloquence in true enthusiasm.” 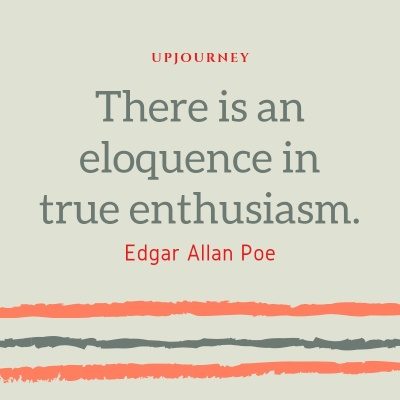 6. “I have great faith in fools self-confidence my friends call it.”

7. “The generous Critic fann’d the Poet’s fire, And taught the world with reason to admire.”

8. “I have, indeed, no abhorrence of danger, except in its absolute effect – in terror.”

9. “The death of a beautiful woman, is unquestionably the most poetical topic in the world.”

10. “Of puns it has been said that those who most dislike them are those who are least able to utter them.”

11. “It is the nature of truth in general, as of some ores in particular, to be richest when most superficial.”

12. “I am above the weakness of seeking to establish a sequence of cause and effect, between the disaster and the atrocity.”

13. “I became insane, with long intervals of horrible sanity.” 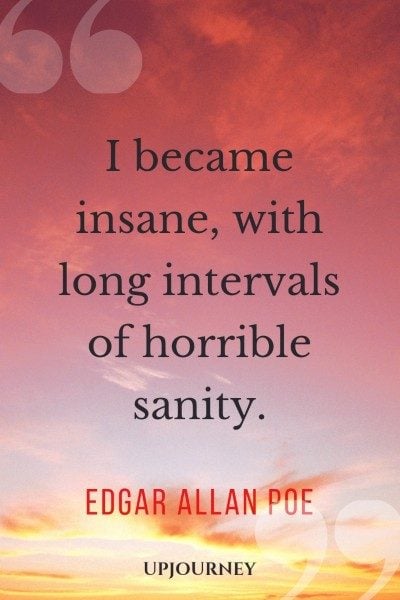 14. “Were I called on to define, very briefly, the term Art, I should call it ‘the reproduction of what the Senses perceive in Nature through the veil of the soul.’ The mere imitation, however accurate, of what is in Nature, entitles no man to the sacred name of ‘Artist.'”

15. “All religion, my friend, is simply evolved out of fraud, fear, greed, imagination, and poetry.”

16. “Stupidity is a talent for misconception.”

18. “Beauty of whatever kind, in its supreme development, invariably excites the sensitive soul to tears.”

19. “It will be found, in fact, that the ingenious are always fanciful, and the truly imaginative never otherwise than analytic.”

20. “A strong argument for the religion of Christ is this – that offenses against Charity are about the only ones which men on their death-beds can be made – not to understand – but to feel – as crime.”

21. “To vilify a great man is the readiest way in which a little man can himself attain greatness.”

22. “The true genius shudders at incompleteness – and usually prefers silence to saying something which is not everything it should be.”

24. “Once upon a midnight dreary, while I pondered weak and weary.” 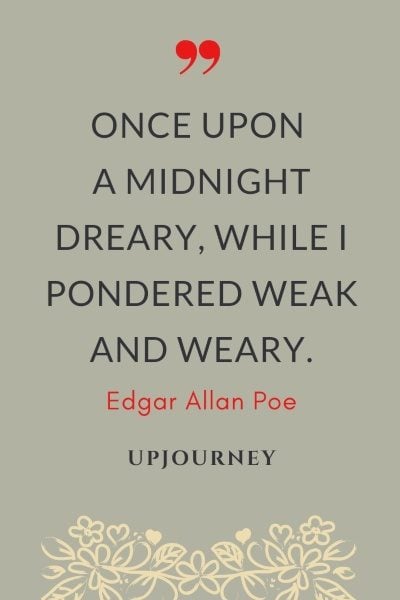