Marshall Bruce Mathers III, popularly and professionally known as Eminem, is a rapper, songwriter, actor, film producer, as well as a record executive and producer. He is consistently referred to as one of the most influential and most celebrated artists of all time, earning the title “King of Hip Hop.”

His incredible rapping skills, extensive vocabulary, and burning passion for music placed Eminem at the top of the charts and attained mainstream popularity.

In 1999, he released his first album titled The Slim Shady LP, which earned him his very first Grammy Award for Best Rap Album. Since then, he wrote songs that illustrates the harsh reality we live in, while also being open about the struggles he faced in his life—both as an artist and an individual.

From having a rough childhood to overcoming addiction, he continually talked about his conflicts, struggles, and successes through his powerful lyrics. Eminem has and continues to inspire millions of people worldwide.

Here are some of the most notable Eminem quotes and sayings about life, music, success, and more.

1. “I want to solidify as an artist and show that as I grow as a person and make mistakes and learn from them, I’m going to grow artistically.”

2. “There was certainly, like, a rebellious, like youthful rage in me. And there was also the fact of not getting away from the fact that I am white, and you know, this is predominantly black music, you know.”

3. “Sometimes I feel like rap music is almost the key to stopping racism.” 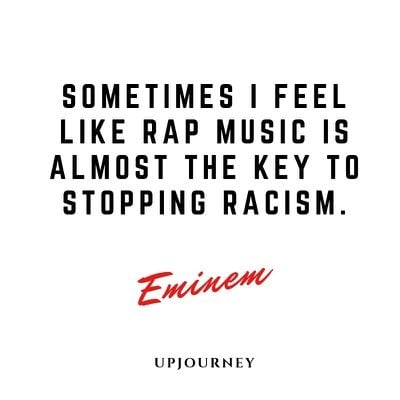 4. “The writing process, the way I go about it is I do whatever the beat feels like, whatever the beat is telling me to do. Usually, when the beat comes on, I think of a hook or the subject I want to rap about almost instantly. Within four, eight bars of it playing I’m just like, ‘Oh, OK. This is what I wanna do’.”

5. “I didn’t have nothin’ going for me… school, home… until I found something I loved, which was music, and that changed everything.”

6. “I’ve accomplished enough with the music that I haven’t had to go out there and do other things to over-saturate.”

8. “I always say this about my music, and music in general: Music is like a time capsule. Each album reflects what I’m going through or what’s going on in my life at that moment.”

11. “If people take anything from my music, it should be motivation to know that anything is possible as long as you keep working at it and don’t back down.”

12. “Hip-hop saved my life, man. It’s the only thing I’ve ever been even decent at. I don’t know how to do anything else.”

3. “The truth is you don’t know what is going to happen tomorrow. Life is a crazy ride, and nothing is guaranteed.” 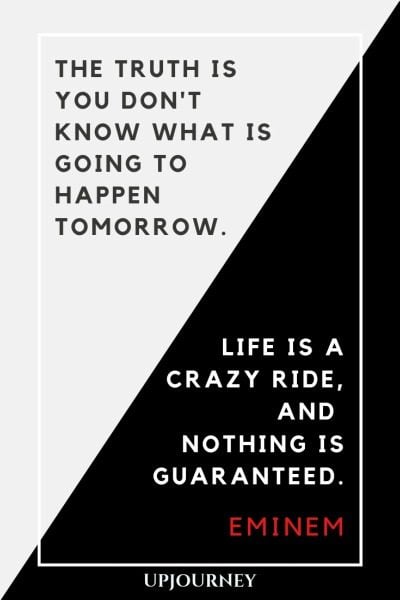 4. “Anything I’ve ever said, I certainly was feeling at the time.”

5. “It creeps me out sometimes to think of the person I was. I was a terrible person. I was mean to people.”

6. “Dealing with backstabbers, there was one thing I learned. They’re only powerful when you got your back turned.”

8. I need to keep working on myself for a while.”

1. “I try to treat all the money I’m making like it’s the last time I’m going to make it.” 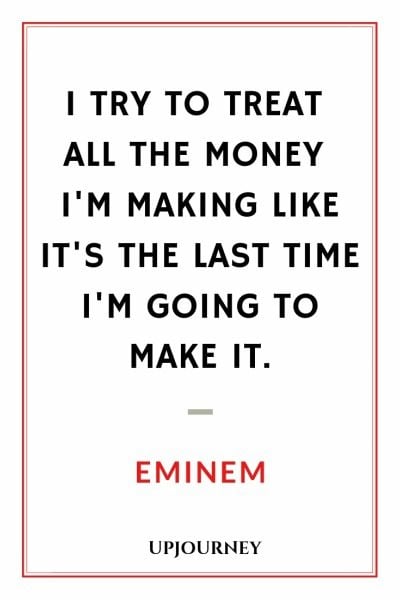 2. “You know, fame is a funny thing, man, especially, you know, actors, musicians, rappers, rock singers, it’s kind of a lifestyle and it’s easy to get caught up in it – you go to bars, you go to clubs, everyone’s doing a certain thing… It’s tough.”

3. “Nobody likes to fail. I want to succeed in everything I do, which isn’t much. But the things that I’m really passionate about, if I fail at those if I’m not successful, what do I have?”

4. “I do say things that I think will shock people. But I don’t do things to shock people. I’m not trying to be the next Tupac, but I don’t know how long I’m going to be on this planet. So while I’m here, I might as well make the most of it.”

5. “Everybody has goals, aspirations or whatever, and everybody has been at a point in their life where nobody believed in them.”

2. “I was going to McDonald’s and Taco Bell every day. The kids behind the counter knew me – it wouldn’t even faze them. Or I’d sit up at Denny’s or Big Boy and just eat by myself. It was sad. I got so heavy that people started to not recognize me.”

3. “Trust is hard to come by. That’s why my circle is small and tight. I’m kind of funny about making new friends.” 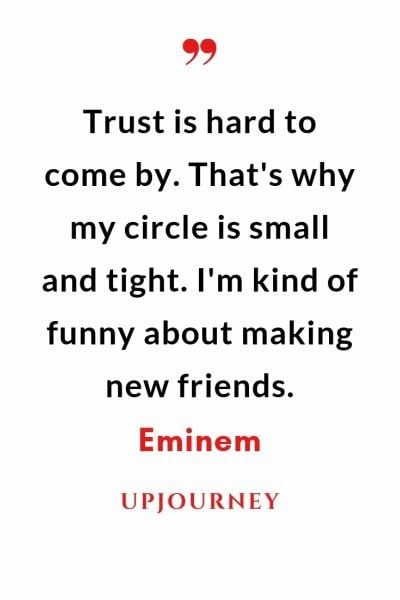 6. “My father? I never knew him. Never even seen a picture of him.”

7. “I don’t even know how to speak up for myself, because I don’t really have a father who would give me the confidence or advice.”

9. “My family has never been there for me. They expect things because we’re blood.”

10. “It’d be stupid for me to sit here and say that there aren’t kids who look up to me, but my responsibility is not to them. I’m not a baby sitter.”

11. “I was poor white trash, no glitter, no glamour, but I’m not ashamed of anything.”

13. “Somewhere deep down there’s a decent man in me, he just can’t be found.”

14. “These times are so hard, and they’re getting even harder.”

If you would like to know more about the life story and struggles of being “Eminem,” we would suggest you read The Way I Am.