Epictetus was a Greek Stoic philosopher who believed that philosophy was a way of life and not merely a school of thought. He was born a slave in Phrygia (present-day Turkey) on 55 AD. No one knows what name his parents gave him. “Epictetus” means “gained” in Greek.

Epictetus spent his childhood as a slave in Rome for Nero’s secretary, Epaphroditus. With the permission of his master, he studied philosophy and Stoicism under the Musonius Rufus. And upon obtaining his freedom after Nero’s death in 68 A.D, Epictetus began teaching Philosophy in Rome. 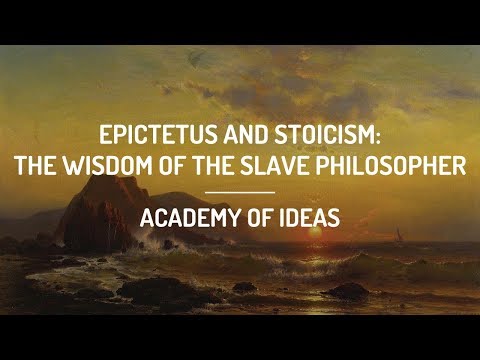 Though Epictetus have no known written works, his student Arrian transcribed his discourses and compiled it to a book entitled the Enchiridion.

Here are some of the best and sage Epictetus quotes and sayings that impart his thoughts on Stoicism and the wisdom he bore in the many years of his life.

1. “He is a drunkard who takes more than three glasses though he be not drunk.”

2. “People are not disturbed by things, but by the view they take of them.”

3. “All religions must be tolerated… for every man must get to heaven in his own way.” 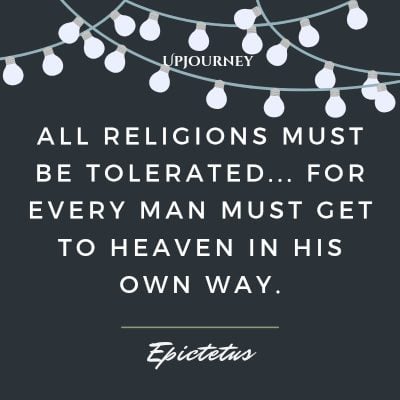 5. “You are a little soul carrying around a corpse.”

6. “Whenever you are angry, be assured that it is not only a present evil, but that you have increased a habit.”

7. “There is nothing good or evil save in the will.”

8. “Make the best use of what is in your power, and take the rest as it happens.”

9. “If you desire to be good, begin by believing that you are wicked.”

10. “It is impossible to begin to learn that which one thinks one already knows.”

12. “Do not laugh much or often or unrestrainedly.”

13. “Be careful to leave your sons well instructed rather than rich, for the hopes of the instructed are better than the wealth of the ignorant.” 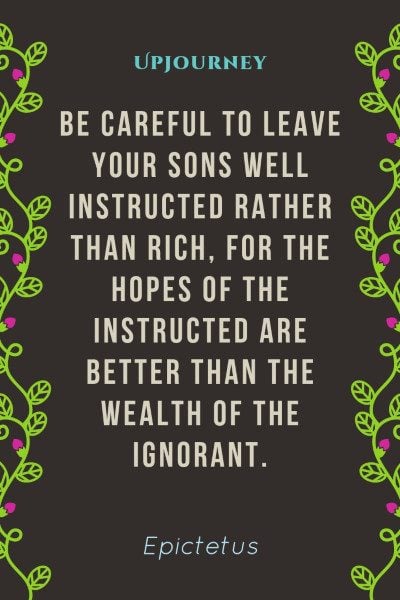 14. “It is the nature of the wise to resist pleasures, but the foolish to be a slave to them.”

15. “First learn the meaning of what you say, and then speak.”

17. “No great thing is created suddenly.”

19. “Imagine for yourself a character, a model personality, whose example you determine to follow, in private as well as in public.”

20. “We have two ears and one mouth so that we can listen twice as much as we speak.”

21. “Do not seek to bring things to pass in accordance with your wishes, but wish for them as they are, and you will find them.”

22. “One that desires to excel should endeavor in those things that are in themselves most excellent.” 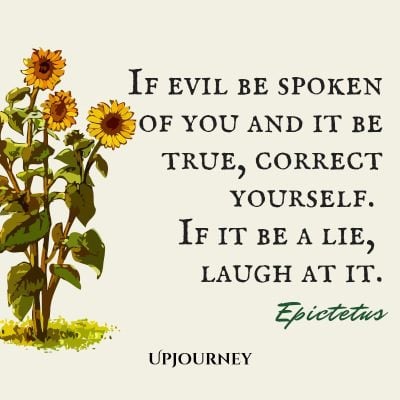 24. “Nothing great is created suddenly, any more than a bunch of grapes or a fig. If you tell me that you desire a fig. I answer you that there must be time. Let it first blossom, then bear fruit, then ripen.”

25. “Wealth consists not in having great possessions, but in having few wants.”

26. “We should not moor a ship with one anchor, or our life with one hope.”

28. “Keep silence for the most part, and speak only when you must, and then briefly.”

29. “First say to yourself what you would be; and then do what you have to do.”

30. “Unless we place our religion and our treasure in the same thing, religion will always be sacrificed.”

31. “The greater the difficulty the more glory in surmounting it. Skillful pilots gain their reputation from storms and tempests.”

32. “Neither should a ship rely on one small anchor, nor should life rest on a single hope.”

33. “The world turns aside to let any man pass who knows where he is going.” 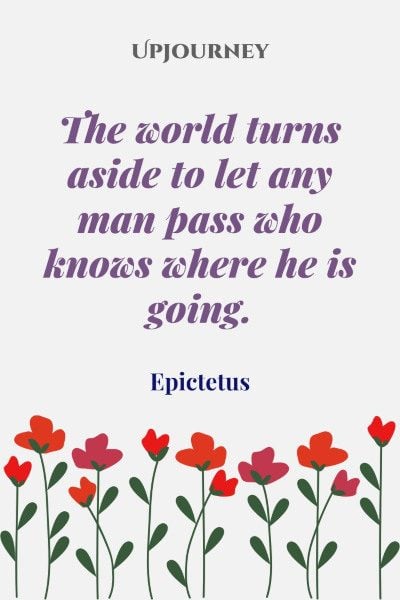 34. “Is freedom anything else than the right to live as we wish? Nothing else.”

35. “The essence of philosophy is that a man should so live that his happiness shall depend as little as possible on external things.”

36. “It takes more than just a good looking body. You’ve got to have the heart and soul to go with it.”

37. “Men are disturbed not by things, but by the view which they take of them.”

38. “We are not to give credit to the many, who say that none ought to be educated but the free but rather to the philosophers, who say that the well-educated alone are free.”

39. “It is not he who reviles or strikes you who insults you, but your opinion that these things are insulting.”

40. “The two powers which in my opinion constitute a wise man are those of bearing and forbearing.”

41. “Difficulties are things that show a person what they are.”

42. “You may be always victorious if you will never enter into any contest where the issue does not wholly depend upon yourself.” 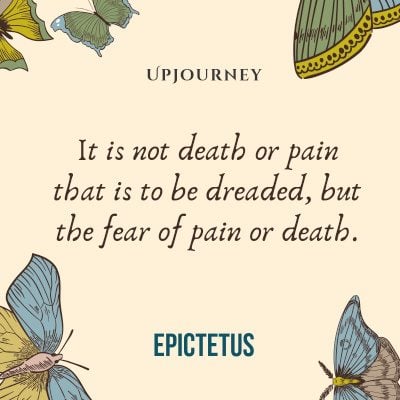 44. “If you want to improve, be content to be thought foolish and stupid.”

45. “Whoever does not regard what he has as most ample wealth, is unhappy, though he be master of the world.”

48. “Not every difficult and dangerous thing is suitable for training, but only that which is conducive to success in achieving the object of our effort.”

50. “Control thy passions lest they take vengeance on thee.”

51. “Freedom is not procured by a full enjoyment of what is desired, but by controlling the desire.”

53. “If virtue promises happiness, prosperity and peace, then progress in virtue is progress in each of these. For to whatever point the perfection of anything brings us, progress is always an approach toward it.” 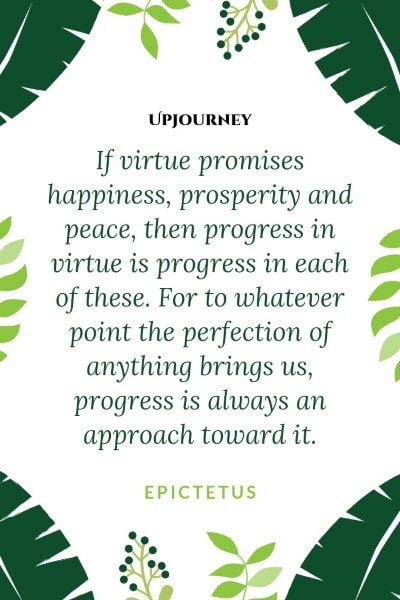 55. “When you are offended at any man’s fault, turn to yourself and study your own failings. Then you will forget your anger.”

56. “If thy brother wrongs thee, remember not so much his wrong-doing, but more than ever that he is thy brother.”

57. “Practice yourself, for heaven’s sake in little things, and then proceed to greater.”

58. “All philosophy lies in two words, sustain and abstain.”

59. “Know, first, who you are, and then adorn yourself accordingly.”

60. “He is a wise man who does not grieve for the things which he has not, but rejoices for those which he has.”

61. “There is only one way to happiness and that is to cease worrying about things which are beyond the power of our will.”

63. “The key is to keep company only with people who uplift you, whose presence calls forth your best.” 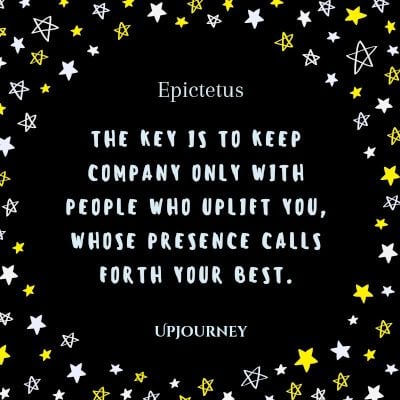 64. “If one oversteps the bounds of moderation, the greatest pleasures cease to please.”

If you’d like to learn more for the Stoic philosopher, Epictetus, we recommend you read Discourses and Selected Writings.