Ernest Hemingway was an American journalist, short-story writer, and novelist. His works and writing style greatly influenced many writers in the 20th century.

Hemingway began his career in writing at the age of seventeen as a journalist for a newspaper in Kansas City. Though, he had already shown the potential of his writing prowess during high school. His career, however, was put to a halt at the start of World War I. During the war, he worked as an ambulance driver, stationed at Italy.

For the majority of his adulthood, Hemingway lived in Paris with his first of four wives. In Paris, he met fellow writers Gertrude Stein, Ezra Pound, and James Joyce among others. Hemingway occasionally traveled as a journalist and stayed in Spain, Cuba, and Africa for a time.

In 1954, he won the Nobel Prize in Literature. However, the following years was the start of his health’s deterioration. Hemingway was hospitalized multiple times and received electroshock treatments. And in the early hours of July 2, 1961, he died after shooting himself.

Awaken your inner writer as you read some of the best Ernest Hemingway quotes and sayings that explore his thoughts on life, writing, war, and more.

1. “If you are lucky enough to have lived in Paris as a young man, then wherever you go for the rest of your life it stays with you, for Paris is a moveable feast.”

3. “I love sleep. My life has the tendency to fall apart when I’m awake, you know?” 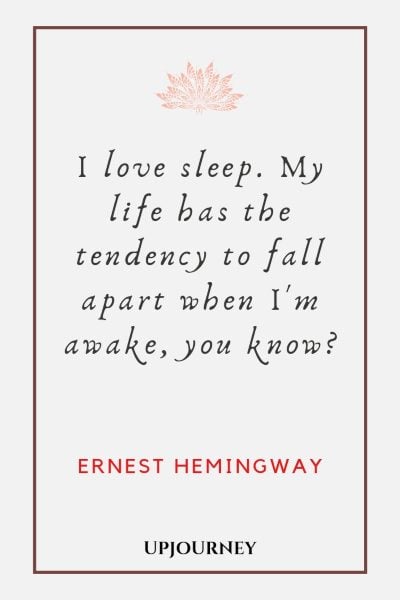 4. “Every man’s life ends the same way. It is only the details of how he lived and how he died that distinguish one man from another.”

5. “All my life I’ve looked at words as though I were seeing them for the first time.”

1. “If a writer knows enough about what he is writing about, he may omit things that he knows. The dignity of movement of an iceberg is due to only one ninth of it being above water.”

4. “It’s none of their business that you have to learn how to write. Let them think you were born that way.”

5. “All our words from loose using have lost their edge.”

6. “I always rewrite each day up to the point where I stopped. When it is all finished, naturally you go over it. You get another chance to correct and rewrite when someone else types it, and you see it clean in type. The last chance is in the proofs. You’re grateful for these different chances.”

7. “You can write any time people will leave you alone and not interrupt you. Or, rather, you can if you will be ruthless enough about it. But the best writing is certainly when you are in love.”

8. “My aim is to put down on paper what I see and what I feel in the best and simplest way.” 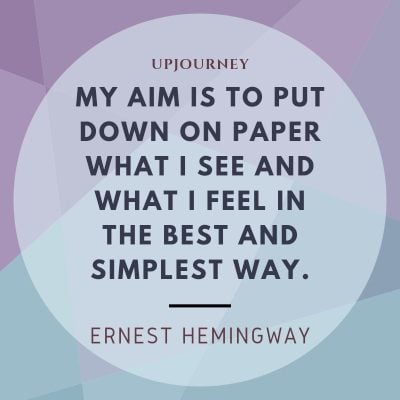 9. “Things may not be immediately discernible in what a man writes, and in this sometimes he is fortunate; but eventually they are quite clear, and by these and the degree of alchemy that he possesses, he will endure or be forgotten.”

10. “There is no rule on how to write. Sometimes it comes easily and perfectly; sometimes it’s like drilling rock and then blasting it out with charges.”

11. “You see, I am trying in all my stories to get the feeling of the actual life across – not to just depict life – or criticize it – but to actually make it alive. So that when you have read something by me, you actually experience the thing. You can’t do this without putting in the bad and the ugly as well as what is beautiful.”

12. “A man’s got to take a lot of punishment to write a really funny book.”

14. “There is nothing to writing. All you do is sit down at a typewriter and bleed.”

15. “On the ‘Star,’ you were forced to learn to write a simple declarative sentence. This is useful to anyone. Newspaper work will not harm a young writer and could help him if he gets out of it in time.”

18. “Once writing has become your major vice and greatest pleasure, only death can stop it.” 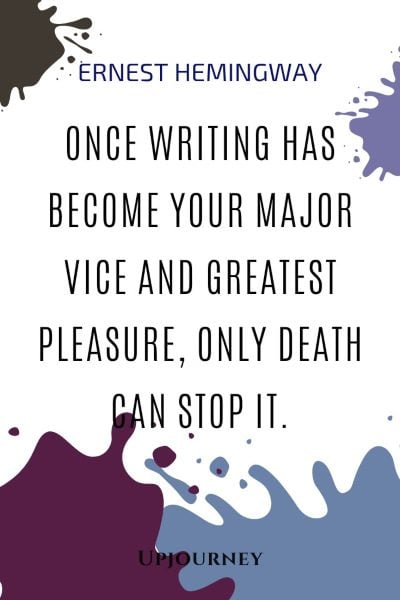 19. “For a true writer, each book should be a new beginning where he tries again for something that is beyond attainment. He should always try for something that has never been done or that others have tried and failed. Then sometimes, with great luck, he will succeed.”

20. “I rewrote the ending to ‘Farewell to Arms,’ the last page of it, thirty-nine times before I was satisfied.”

21. “I don’t like to write like God. It is only because you never do it, though, that the critics think you can’t do it.”

22. “I learned never to empty the well of my writing, but always to stop when there was still something there in the deep part of the well, and let it refill at night from the springs that fed it.”

23. “From things that have happened and from things as they exist and from all things that you know and all those you cannot know, you make something through your invention that is not a representation but a whole new thing truer than anything true and alive, and you make it alive, and if you make it well enough, you give it immortality.”

24. “For a long time now I have tried simply to write the best I can. Sometimes I have good luck and write better than I can.”

25. “Forget your personal tragedy. We are all bitched from the start and you especially have to be hurt like hell before you can write seriously. But when you get the damned hurt, use it-don’t cheat with it.”

26. “I’ve tried to reduce profanity but I reduced so much profanity when writing the book that I’m afraid not much could come out. Perhaps we will have to consider it simply as a profane book and hope that the next book will be less profane or perhaps more sacred.”

27. “Prose is architecture, not interior decoration, and the Baroque is over.”

1. “Man is not made for defeat. A man can be destroyed but not defeated.” 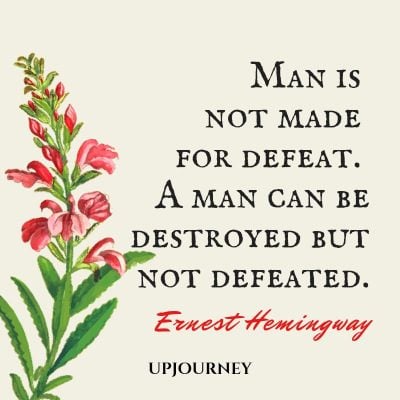 2. “The first panacea for a mismanaged nation is inflation of the currency the second is war. Both bring a temporary prosperity both bring a permanent ruin. But both are the refuge of political and economic opportunists.”

3. “Once we have a war there is only one thing to do. It must be won. For defeat brings worse things than any that can ever happen in war.”

4. “Wars are caused by undefended wealth.”

5. “When you go to war as a boy, you have a great illusion of immortality. Other people get killed, not you… Then, when you are badly wounded the first time, you lose that illusion, and you know it can happen to you.”

6. “Never think that war, no matter how necessary, nor how justified, is not a crime.”

8. “For a war to be just three conditions are necessary – public authority, just cause, right motive.”

1. “Never go on trips with anyone you do not love.”

2. “Happiness in intelligent people is the rarest thing I know.” 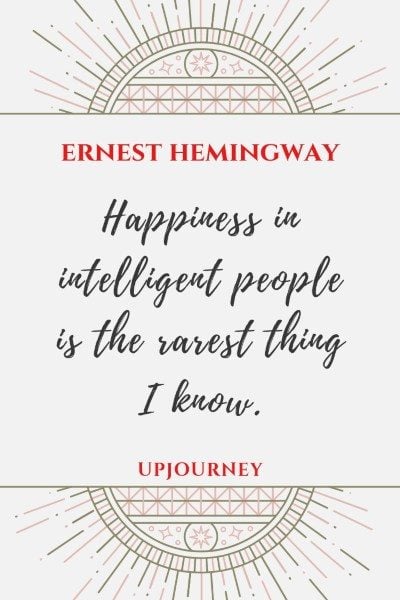 3. “When writing a novel a writer should create living people; people not characters. A character is a caricature.”

4. “Madame, all stories, if continued far enough, end in death, and he is no true-story teller who would keep that from you.”

5. “Hesitation increases in relation to risk in equal proportion to age.”

6. “When you have shot one bird flying you have shot all birds flying. They are all different and they fly in different ways but the sensation is the same and the last one is as good as the first.”

7. “The best way to find out if you can trust somebody is to trust them.”

8. “The game of golf would lose a great deal if croquet mallets and billiard cues were allowed on the putting green.”

9. “The good parts of a book may be only something a writer is lucky enough to overhear or it may be the wreck of his whole damn life and one is as good as the other.”

10. “That terrible mood of depression of whether it’s any good or not is what is known as The Artist’s Reward.”

11. “Cowardice… is almost always simply a lack of ability to suspend functioning of the imagination.”

12. “I like to listen. I have learned a great deal from listening carefully. Most people never listen.” 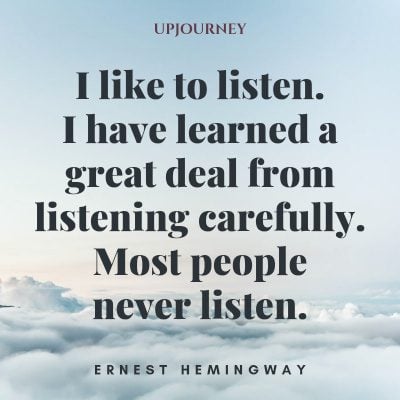 15. “That is what we are supposed to do when we are at our best – make it all up – but make it up so truly that later it will happen that way.”

16. “I love to go to the zoo. But not on Sunday. I don’t like to see the people making fun of the animals, when it should be the other way around.”

17. “We are all apprentices in a craft where no one ever becomes a master.”

19. “Always do sober what you said you’d do drunk. That will teach you to keep your mouth shut.”

20. “Bullfighting is the only art in which the artist is in danger of death and in which the degree of brilliance in the performance is left to the fighter’s honor.”

21. “Why should anybody be interested in some old man who was a failure?”

22. “All good books have one thing in common – they are truer than if they had really happened.” 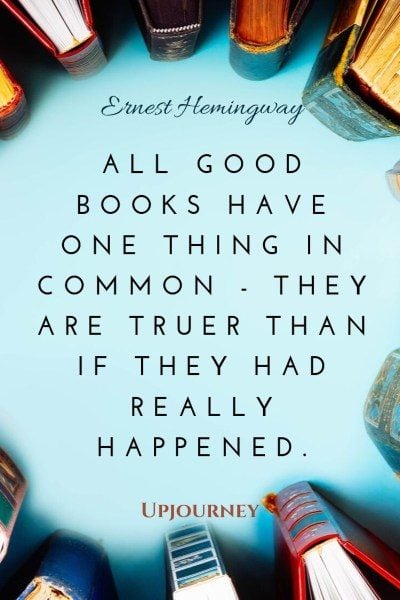 23. “There are events which are so great that if a writer has participated in them his obligation is to write truly rather than assume the presumption of altering them with invention.”

24. “An intelligent man is sometimes forced to be drunk to spend time with his fools.”

25. “Courage is grace under pressure.”

26. “Decadence is a difficult word to use since it has become little more than a term of abuse applied by critics to anything they do not yet understand or which seems to differ from their moral concepts.”

28. “As you get older it is harder to have heroes, but it is sort of necessary.”

29. “There is no lonelier man in death, except the suicide, than that man who has lived many years with a good wife and then outlived her. If two people love each other there can be no happy end to it.”

30. “The only thing that could spoil a day was people. People were always the limiters of happiness except for the very few that were as good as spring itself.”

31. “Switzerland is a small, steep country, much more up and down than sideways, and is all stuck over with large brown hotels built on the cuckoo clock style of architecture.” 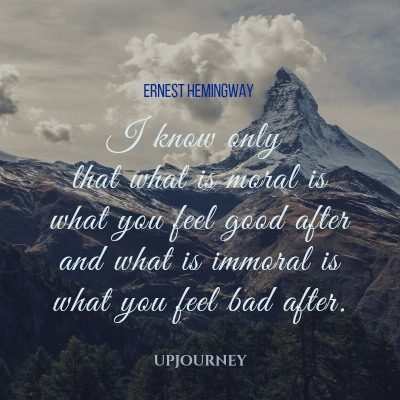 33. “When I have an idea, I turn down the flame, as if it were a little alcohol stove, as low as it will go. Then it explodes and that is my idea.”

34. “Fear of death increases in exact proportion to increase in wealth.”

If you’d like to read some of Ernest Hemingway’s best works, we recommend that you read his novel Old Man and the Sea.