Did you notice how some of the fears we have, make us feel comfortable in unfavorable circumstances?

The fear of failure is no different. Sometimes we prefer to carry on pains that no one knows about, rather than allowing others see us failing.

We worry that if we take a chance and fail one or more of the following could happen:

Worrying about these things can amplify your fear of failure. As a consequence, it might feel that the only way to prevent those negative emotions to happen to you is not even trying, keeping the status quo and endure the pains you already know and learned how to manage. 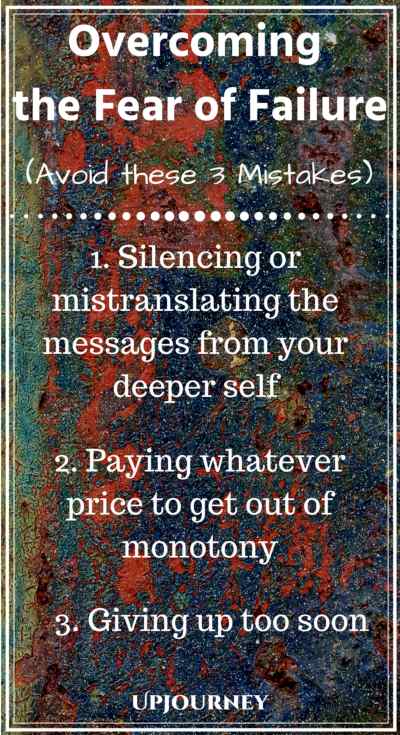 Now, to build up your resilience in the face of fear of failure, pay attention to the 3 most common mistakes people tend to make about the fear of failing:

1. Silencing or mistranslating the messages from your deeper self.

You see? When you’re afraid, something deep inside you tells you “pay attention, move forward with caution”. Yet, many times we misinterpret that message and translate it into “there is no bigger disaster other than failing”.

Failing is not a disaster. A disaster is to shy away from making the steps up to your success. (Failing and trying again is one of those steps.)

You are living hard times. Never before was more significant the pressure to succeed, to measure up to others standards, to fit into your journey all your talents, skills and potential. Therefore, no wonder if you’re afraid of failing.

You have many talents, excellent skills, and vast potential. Yet, realistically, you can’t exercise them all because what, we, humans, lack the most is time.

Fit in your journey to success those things that give you satisfaction, that you enjoy doing, that bring you admiration not from others but yourself. Remind yourself that being happy and content is a success in itself.

And, now, that you’re probably more relaxed about allowing yourself to fail sometimes let’s talk about the second mistake to avoid.

2. Paying whatever price to get out of monotony.

Most of us don’t like repetitive tasks. We get easily bored and pay almost any price for getting out of monotony.

Being unable to success from the first try can trap you into monotony. You know that failure is cured with trying again and again, in many different ways until you get the result you want. And that trying, again and again, can seem harder to endure than the fear of failure or leading a dull existence.

If you don’t have the patience to go through periods of monotony, the chances are you’ve experienced failing more times than you should have. Just think about it!

Have you tried something and failed? Then, Told yourself “oh, I don’t want to do it again”? Did you move on to do something you had no idea how to do but seemed more exciting? And then, failed because of that lack of experience? …And, yet still, moved on to something else instead of trying again?

That is how fear of failure and monotony made you fail more than you should have considering your abilities, talents, and skills.

Have you ever wondered what’s the biggest challenge for public speakers and what “helps” them fail the most?

Yes, it’s monotony: Delivering the same speech over and over again.

The need for something new can make people take so often unpaved roads; forgetting where they started and where they wanted to go, drifting with no aim.

Even self-confidence requires you to be like a robot sometimes; forget your need to be original and innovative and do how others did before you, or do the same thing over and over.

Now, if you think about it, what scares you the most, failing or that you have to do it again and again? Be honest with yourself.

3. Giving up too soon

Another trap of the fear of failure is that some things might need adjustments after you thought you finished.

Oh! These situations can be so annoying. Don’t they?

It’s like assembling Ikea furniture, and when you’re done, to your shock and amazement you have left ten screws and four shelves…you know, you have to start over…so annoying!

Now, you may say that silencing your deeper self, monotony, and being forced to start over don’t have anything to do with the fear of failure. However, these three things are ever present on the back of your mind when you fear to fail. All other reasons for this fear are pale by comparison.

What frustrates you most, that you have to start over or that someone could think bad about you? Not meeting others standards or enduring monotony and repetitive work? Because at some point you care so much less about others opinion than your momentary comfort and enjoyment. Is it not?