He was known for his extravagant stage persona and for having four-octave vocal range. He is also considered one of the greatest singers in the history of popular music.

Having studied and written music for many years, Freddie formed Queen in 1970 along with Brian May, Roger Taylor, and John Deacon. Some of their famous songs include Bohemian Rhapsody, Crazy Little Thing Called Love, We Are the Champions and many more. Due to their amazing talents, Queen was awarded the Brit Award for Outstanding Contribution to British Music in 1990.

In 1991, Freddie died at the age of 45 due to complications from AIDS. Although his life was short-lived, he was without a doubt one of the most iconic rock stars to have ever existed. To honor his memory, we bring to you the top 38 Freddie Mercury quotes and sayings that will continue to inspire.

1. “You know, I designed the Queen crest. I simply combined all the creatures that represent our star signs and I don’t even believe in astrology.”

2. “The reason we’re successful, darling? My overall charisma, of course.”

4. “Back in the old days, we were often compared to Led Zeppelin. If we did something with harmony, it was the Beach Boys. Something heavy was Led Zeppelin.”

5. “We’re a very expensive group; we break a lot of rules. It’s unheard of to combine opera with a rock theme, my dear.”

6. “A concert is not a live rendition of our album. It’s a theatrical event.” 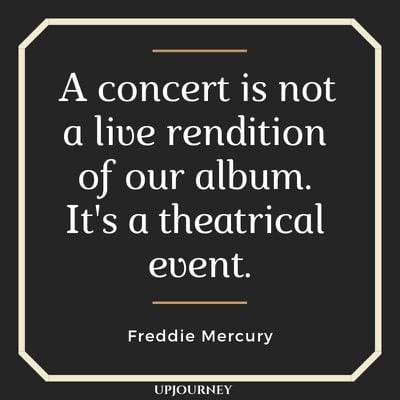 7. “And, we have no such thing as a budget anymore. Our manager freaks when we show him the bill. We’re lavish to the bone, but all our money goes back into the product.”

8. “When the whole point of Queen was to be original.”

9. “But, you know, we spent two years putting our act together.”

10. “We were disliked by the press in the early days because they couldn’t put their finger on us, and that was the case with Zeppelin as well.”

11. “One night Roger was in a foul mood and he threw his entire bloody drumset across the stage. The thing only just missed me – I might have been killed.”

12. “We’ve gone overboard on every Queen album. But that’s Queen.”

13. “Years ago, I thought up the name Queen. It’s just a name. But it’s regal, obviously, and -sounds splendid.”

14. “In the early days, we just wore black onstage. Very bold, my dear. Then we introduced white, for variety, and it simply grew and grew.”

1. “The others don’t like my interviews. And frankly, I don’t care much for theirs.”

2. “I always knew I was a star And now, the rest of the world seems to agree with me.”

3. “Money may not buy happiness, but it can damn well give it!”

4. “I want to lead the Victorian life, surrounded by exquisite clutter.” 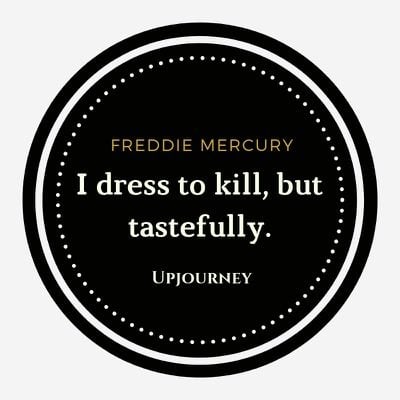 8. “I guess I’ve always lived the glamorous life of a star. It ‘s nothing new – I used to spend down to the last dime.” 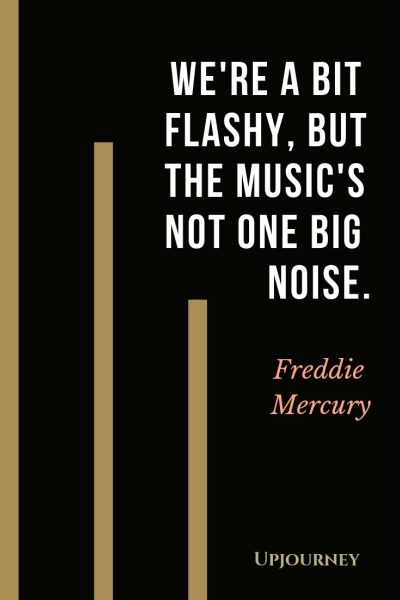 4. “I think my melodies are superior to my lyrics.”

6. “The lavish presentation appeals to me, and I’ve got to convince the others.”

7. “When I’m dead, I want to be remembered as a musician of some worth and substance.”

1. “Is Billy Idol just doing a bad Elvis pout, or was he born that way?”

2. “I got my diploma from Ealing College of Art, in graphics and illustration.”

3. “It destroys the soul to hear that you’re all hype, that you have no talent, and that your whole career has been contrived.”

4. “I was never too keen on the British music press. They’ve called us a supermarket hype, and they used to suggest that we didn’t write our own songs.” 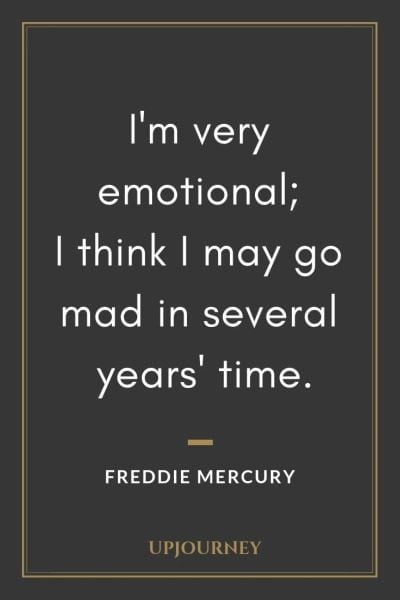 6. “I have fun with my clothes onstage; it’s not a concert you’re seeing, it’s a fashion show.”

If you would like to know more about the life journey of the legendary Freddie Mercury, we would suggest you read Somebody to Love: The Life, Death, and Legacy of Freddie Mercury by Matt Richards and Mark Langthorne.