George Carlin was a well-known American stand-up comedian, author, actor, and social critic. He has made thousands of people laugh with his jokes that revolved on the English language, religion, psychology, and a few taboo topics.

Carlin began his professional career through radio shows in 1956 when he was still 19 years old. He gained exposure when he made his first appearance at The Tonight Show with Jack Paar. From then, he appeared in many TV shows, and his 14 HBO Specials garnered Emmy nominations and SixCable awards.

He was filming his final HBO special, It’s Bad for Ya, for less than four months when he died from a cardiac arrest. Carlin was then awarded the Mark Twain Prize for American Humor posthumously. Listed below are some of the most hilarious and provocative George Carlin quotes we have collected that explores his views on religion, life, and many others.

1. “I would never want to be a member of a group whose symbol was a guy nailed to two pieces of wood.”

2. “I was thinking about how people seem to read the Bible a whole lot more as they get older; then it dawned on me – they’re cramming for their final exam.”

3. “I have as much authority as the Pope, I just don’t have as many people who believe it.” 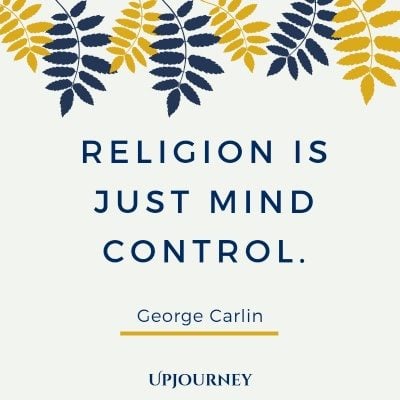 5. “Atheism is a non-prophet organization.”

3. “There’s no present. There’s only the immediate future and the recent past.”

4. “Most people work just hard enough not to get fired and get paid just enough money not to quit.”

5. “Just cause you got the monkey off your back doesn’t mean the circus has left town.”

7. “When you step on the brakes, your life is in your foot’s hands.”

8. “When someone is impatient and says, “I haven’t got all day,” I always wonder, How can that be? How can you not have all day?”

1. “I’m always relieved when someone is delivering a eulogy and I realize I’m listening to it.”

2. “May the forces of evil become confused on the way to your house.” 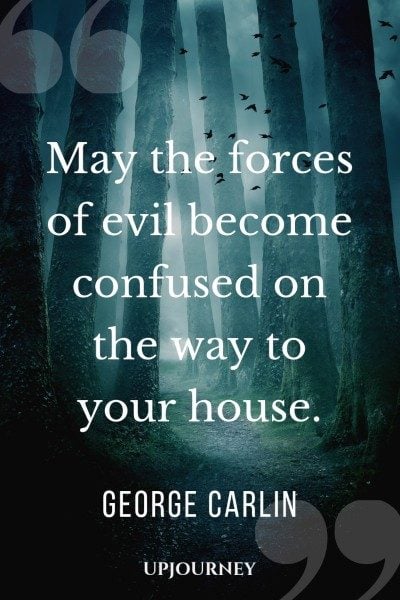 3. “You know the good part about all those executions in Texas? Fewer Texans.”

5. “Standing ovations have become far too commonplace. What we need are ovations where the audience members all punch and kick one another.”

7. “The main reason Santa is so jolly is because he knows where all the bad girls live.”

8. “The other night I ate at a real nice family restaurant. Every table had an argument going.”

9. “When Thomas Edison worked late into the night on the electric light, he had to do it by gas lamp or candle. I’m sure it made the work seem that much more urgent.”

10. “If it’s true that our species is alone in the universe, then I’d have to say the universe aimed rather low and settled for very little.” 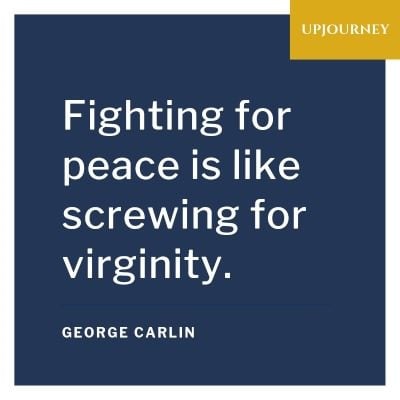 12. “In comic strips, the person on the left always speaks first.”

13. “I went to a bookstore and asked the saleswoman, “Where’s the self-help section?” She said if she told me, it would defeat the purpose.”

15. “Frisbeetarianism is the belief that when you die, your soul goes up on the roof and gets stuck.”

16. “At a formal dinner party, the person nearest death should always be seated closest to the bathroom.”

17. “You know an odd feeling? Sitting on the toilet eating a chocolate candy bar.”

18. “I’m not concerned about all hell breaking loose, but that a PART of hell will break loose… it’ll be much harder to detect.”

22. “The very existence of flame-throwers proves that some time, somewhere, someone said to themselves, You know, I want to set those people over there on fire, but I’m just not close enough to get the job done.”

23. “I think people should be allowed to do anything they want. We haven’t tried that for a while. Maybe this time it’ll work.”

25. “I’m completely in favor of the separation of Church and State. My idea is that these two institutions screw us up enough on their own, so both of them together is certain death.” 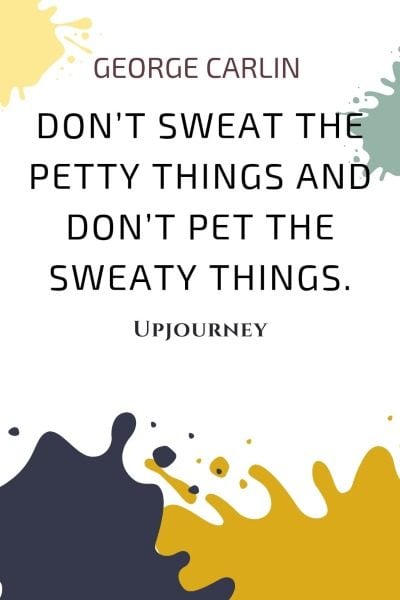 27. “One can never know for sure what a deserted area looks like.”

28. “Death is caused by swallowing small amounts of saliva over a long period of time.”

2. “I think it would be interesting if old people got anti-Alzheimer’s disease where they slowly began to recover other people’s lost memories.”

3. “Inside every cynical person, there is a disappointed idealist.” 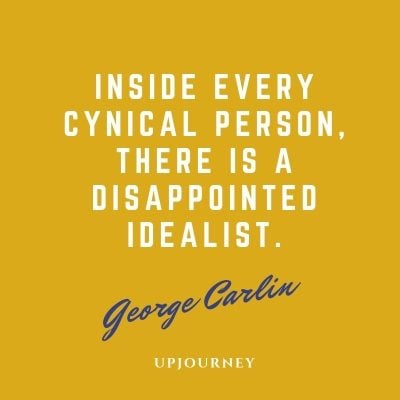 5. “By and large, language is a tool for concealing the truth.”

6. “I recently went to a new doctor and noticed he was located in something called the Professional Building. I felt better right away.”

8. “The reason I talk to myself is that I’m the only one whose answers I accept.” 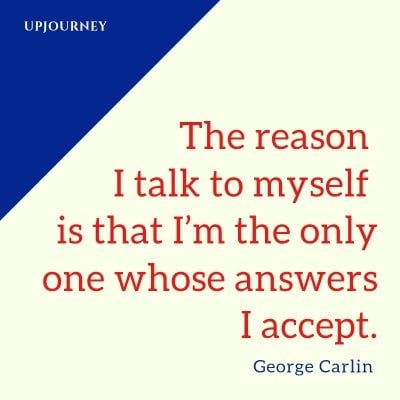 9. “There are nights when the wolves are silent and only the moon howls.”

11. “Dusting is a good example of the futility of trying to put things right. As soon as you dust, the fact of your next dusting has already been established.”

12. “‘I am’ is reportedly the shortest sentence in the English language. Could it be that ‘I do’ is the longest sentence?”

If you’d like to read more of George Carlin’s life and works, we suggest you read his autobiography, Last Words.