Gloria Marie Steinem is an author, journalist, social-political activist, and a feminist icon who became nationally known as a leader and spokeswoman for the American feminist movement during the late 60s and early 70s.

Steinem was also a columnist for New York magazine. She published an article titled, “After Black Power, Women’s Liberation” in 1969, which led her to national fame as a feminist leader.

In the year 2005, she co-founded the Women’s Media Center, together with Jane Fonda and Robin Morgan; an organization that operates “to make women visible and powerful in the media.”

Steinem has been dubbed as the “Mother of Feminism,” and is a woman we can all admire. She still travels globally as a lecturer and an organizer and is a media spokeswoman on issues of equality, alongside other social matters.

We have collected some of the most memorable Gloria Steinem quotes and sayings that explores her thoughts and views regarding life, feminism, marriage, and much more.

2. “Women’s progress has been a collective effort.”

3. “Power can be taken, but not given. The process of the taking is empowerment in itself.”

4. “If you say, I’m for equal pay, that’s a reform. But if you say. I’m a feminist, that’s a transformation of society.”

5. “We’ll never solve the feminization of power until we solve the masculinity of wealth.”

6. “Gender is probably the most restricting force in American life.” 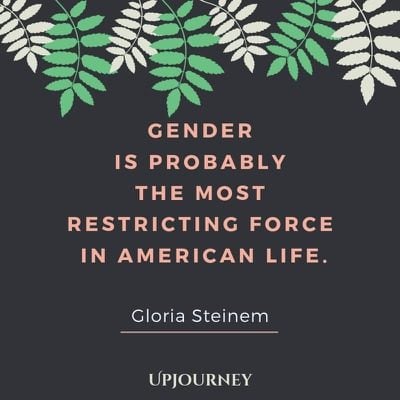 7. “Any woman who chooses to behave like a full human being should be warned that the armies of the status quo will treat her as something of a dirty joke. That’s their natural and first weapon. She will need her sisterhood.”

8. “A gender-equal society would be one where the word ‘gender’ does not exist: where everyone can be themselves.”

9. “Most women are one man away from welfare.”

10. “After feminism, I suddenly realised: not everyone has to live the same way. Imagine that!”

11. “Most women’s magazines simply try to mold women into bigger and better consumers.”

12. “The first resistance to social change is to say it’s not necessary.” 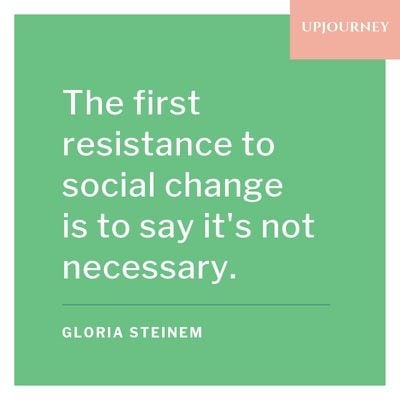 13. “What has the women’s movement learned from Geraldine Ferraro’s candidacy for vice president? Never get married.”

14. “If you ask men about their body image, they will tell you they look better than they do. And if you ask a woman, she’ll tell you she looks worse.”

15. “A woman without a man is like a fish without a bicycle.”

16. “We’ve begun to raise daughters more like sons… but few have the courage to raise our sons more like our daughters.”

17. “Obviously there is no such thing as race, and in many ways, sex is a continuum, not a binary. So it doesn’t make sense to label people in that way.”

19. “I want to help correct the inaccurate image of immigration in the media. There is an idea that women’s issues are over here and immigration is over there. Three quarters of undocumented workers are women and children.”

20. “Having one’s traditional role questioned is not a very comfortable experience, perhaps especially for women, who have been able to remain children, and to benefit from work they did not and could not do.”

21. “To say ‘radical feminist’ is only a way of indicating that I believe the sexual caste system is a root of race and class and other divisions.”

22. “The problem for all women is we’re identified by how we look instead of by our heads and our hearts.” 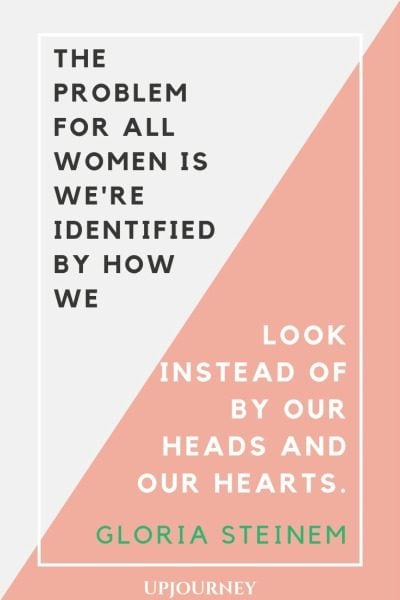 23. “The Miss America Pageant reinforces a belief that women are merely how they look and how they please.”

24. “All women, and men of color – we were owned like tables and chairs. We spent a hundred years getting a legal identity as human beings. That’s a big thing.”

25. “The deepest change begins with men raising children as much as women do and women being equal actors in the world outside the home. There are many ways of supporting that, from something as simple as paid sick leave and flexible work hours to attributing an economic value to all caregiving and making that amount tax deductible.”

1. “The future depends entirely on what each of us does every day; a movement is only people moving.”

2. “We need to remember across generations that there is as much to learn as there is to teach.”

3. “Without leaps of imagination, or dreaming, we lose the excitement of possibilities. Dreaming, after all, is a form of planning.”

4. “Every social justice movement that I know of has come out of people sitting in small groups, telling their life stories, and discovering that other people have shared similar experiences.”

5. “Being misunderstood by people whose opinions you value is absolutely the most painful.” 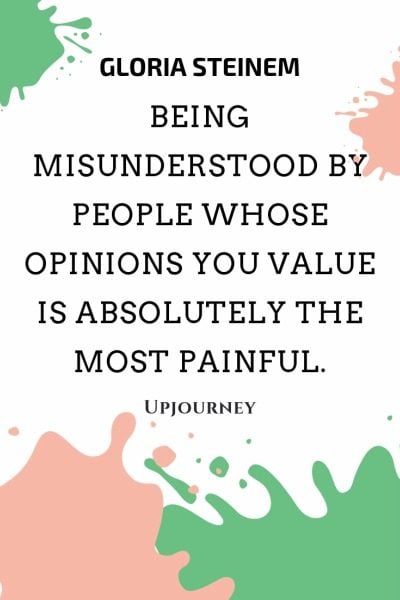 6. “I’m a freelance person, and I’ve always been able to support myself.”

7. “There’s no greater gift than thinking that you had some impact on the world, for the better.”

1. “I believe a marriage is between a man and a woman.”

2. “I have yet to hear a man ask for advice on how to combine marriage and a career.” 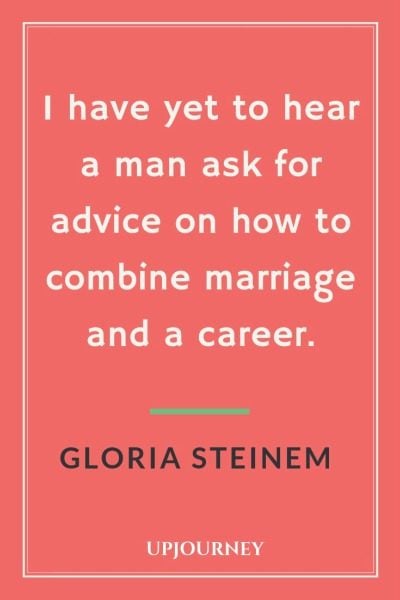 4. “I was never against marriage per se. Before feminism, I didn’t think you had any choice. In fact, for a long time I always assumed I would get married. I just didn’t see any marriages I wanted to emulate, so I kept putting it off.”

1. “The men and women of Afghanistan are building a nation that is free, and proud, and fighting terror – and America is honored to be their friend.”

2. “You teach a child to read, and he or her will be able to pass a literacy test.”

3. “Faith crosses every border and touches every heart in every nation.” 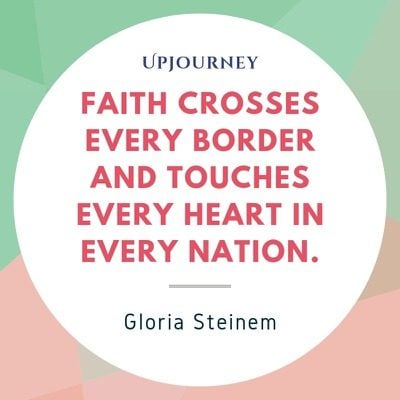 4. “I just want you to know that, when we talk about war, we’re really talking about peace.”

5. “Today we affirm a new commitment to live out our nation’s promise through civility, courage, compassion and character.”

6. “A pedestal is as much a prison as any small, confined space.”

8. “From pacifist to terrorist, each person condemns violence – and then adds one cherished case in which it may be justified.”

9. “Freedom itself was attacked this morning by a faceless coward, and freedom will be defended.”

11. “I looked up affirmative action once in Wikipedia, and it said, ‘A measure by which white men are discriminated against,’ and I got so mad.”

13. “America is a friend to the people of Iraq. Our demands are directed only at the regime that enslaves them and threatens us. When these demands are met, the first and greatest benefit will come to Iraqi men, women and children.”

14. “Natural gas is hemispheric. I like to call it hemispheric in nature because it is a product that we can find in our neighborhoods.”

15. “Look, when you’re the president, there’s all kinds of things said about us. I mean, it’s just the nature of the job.”

16. “Pearl Jam doesn’t just sing about issues they care about. These guys walk it like they talk it.”

17. “I think you can judge from somebody’s actions a kind of a stability and sense of purpose perhaps created by strong religious roots. I mean, there’s a certain patience, a certain discipline, I think, that religion helps you achieve.”

18. “It’s an incredible con job when you think about it, to believe something now in exchange for something after death. Even corporations with their reward systems don’t try to make it posthumous.”

19. “I can hear you, the rest of the world can hear you and the people who knocked these buildings down will hear all of us soon.” 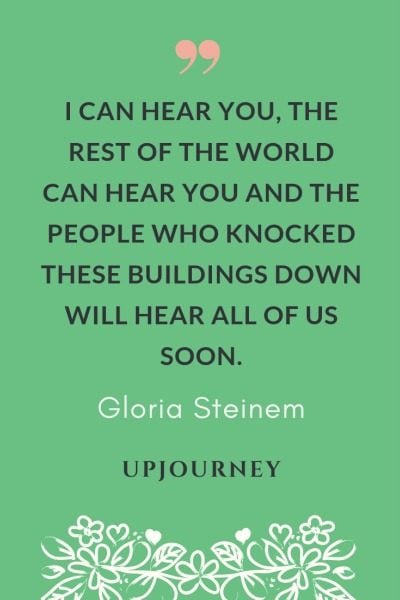 21. “Writing is the only thing that, when I do it, I don’t feel I should be doing something else.”

22. “We will stand up for our friends in the world. And one of the most important friends is the State of Israel. My administration will be steadfast in support Israel against terrorism and violence, and in seeking the peace for which all Israelis pray.”

24. “Now, there are some who would like to rewrite history – revisionist historians is what I like to call them.”

25. “The authority of any governing institution must stop at its citizen’s skin.”

26. “Any government that supports, protects or harbours terrorists is complicit in the murder of the innocent and equally guilty of terrorist crimes.”

27. “You can’t put democracy and freedom back into a box.” 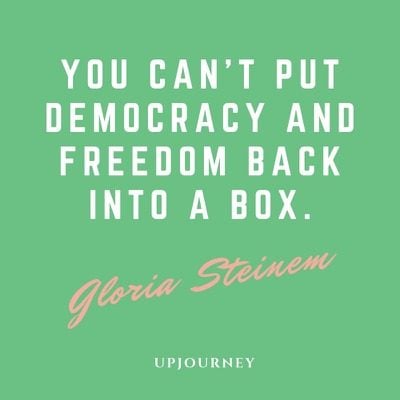 28. “Saddam Hussein is a homicidal dictator who is addicted to weapons of mass destruction.”

29. “The thing about aging is all your old lovers, pretty much if they were really friends, become your family. It’s great. You have those terrible feelings of possessiveness and uncertainty go out the window. You have what you shared. You know you would help each other in times of trouble no matter what.”

30. “Like art, revolutions come from combining what exists into what has never existed before.”

31. “The course of this conflict is not known, yet its outcome is certain. Freedom and fear, justice and cruelty, have always been at war, and we know that God is not neutral between them.”

33. “There’s no bigger task than protecting the homeland of our country.”

34. “I always wanted to put a sign up on the road to Yale saying, Beware: Deconstruction Ahead.”

36. “Our nation must come together to unite.” 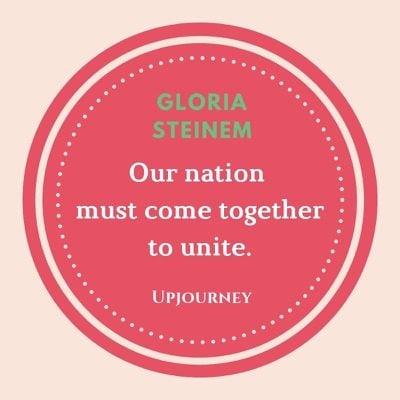 37. “If you hear a statistic, you will make up a story to go with it, because our brains are organized on narrative. And you may very well make up a wrong story because you only have one fact, which is a statistic.”

40. “The caste systems of sex and race are interdependent and can only be uprooted together.”

If you would like to know more about the life and work of Gloria Steinem, we would suggest you read her book, My Life on the Road.