Gordon James Ramsay Jr. is a famous chef, food critic, restaurateur, television personality, writer, and former footballer. He’s one of the best-known and most prominent chefs in British popular culture.

Aside from that, Ramsay is also known for being strict and hot-tempered, especially when inside the kitchen. But for those who may not know him very well, there’s much more to Gordon Ramsay than what we see on the television.

Ramsay worked hard to reach his fame and success. He did not give up despite every setback and struggle along the way. While he may appear arrogant and very stern to some people, it’s because he knows what it takes to win. After all, his restaurants have been awarded a total of 16 Michelin stars and currently hold a total of 7.

He also has a lot of wisdom to share (both inside and outside of the kitchen), so here are the top 53 inspiring quotes and sayings from Chef Gordon Ramsay to help you perform at your best.

1. “I don’t run restaurants that are out of control. We are about establishing phenomenal foot holdings with talent.”

3. “If you want to become a great chef, you have to work with great chefs. And that’s exactly what I did.”

4. “Kitchens are hard environments and they form incredibly strong characters.” 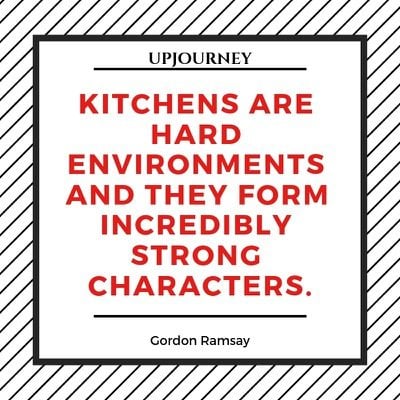 5. “Cooking is about passion, so it may look slightly temperamental in a way that it’s too assertive to the naked eye.”

6. “I’m not trying to take New York by storm. I just want to sneak in there, keep my head down, batten down the hatches and cook.”

7. “I still love football, though, and I think cooking is like football. It’s not a job, it’s a passion. When you become good at it, it’s a dream job and financially you need never to worry. Ever.”

8. “I don’t think it’s a good advert for any restaurant, a fat chef, and secondly, who wants to eat a dessert when the chef’s a fat pig.”

10. “The pressure on young chefs today is far greater than ever before in terms of social skills, marketing skills, cooking skills, personality and, more importantly, delivering on the plate. So you need to be strong. Physically fit. So my chefs get weighed every time they come into the kitchen.”

11. “Swearing is industry language. For as long as we’re alive it’s not going to change. You’ve got to be boisterous to get results.”

12. “When you’re a chef, you graze. You never get a chance to sit down and eat. They don’t actually sit down and eat before you cook. So when I finish work, the first thing I’ll do, and especially when I’m in New York, I’ll go for a run. And I’ll run 10 or 15k on my – and I run to gain my appetite.”

13. “There’s a bond among a kitchen staff, I think. You spend more time with your chef in the kitchen than you do with your own family.”

14. “Cooking today is a young man’s game, I don’t give a bollocks what anyone says.” 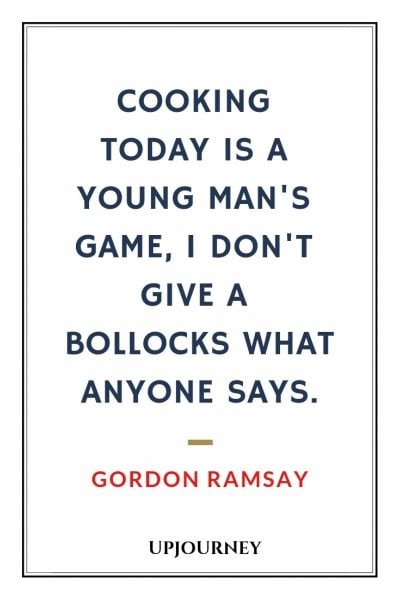 15. “Find what’s hot, find what’s just opened and then look for the worst review of the week. There is so much to learn from watching a restaurant getting absolutely panned and having a bad experience. Go and see it for yourself.”

16. “I train my chefs completely different to anyone else. My young girls and guys, when they come to the kitchen, the first thing they get is a blindfold. They get blindfolded and they get sat down at the chef’s table… Unless they can identify what they’re tasting, they don’t get to cook it.”

17. “We are about creating a new wave of talent. We are the Manchester United of kitchens now. Am I playing full-time in the kitchen? I am a player-coach.”

20. “Chefs are nutters. They’re all self-obsessed, delicate, dainty, insecure little souls and absolute psychopaths. Every last one of them.”

2. “My father was a swim teacher. We used to swim before school, swim after school.”

3. “My wife, a schoolteacher, very disciplined. If you think I’m tough, trust me, and wait till you see when the children are on the naughty step. It’s hilarious. So we decided that I’m going to work like a donkey and provide amazing support for the family.”

4. “I want my kids to see me as Dad, for God’s sake, not a television personality.” 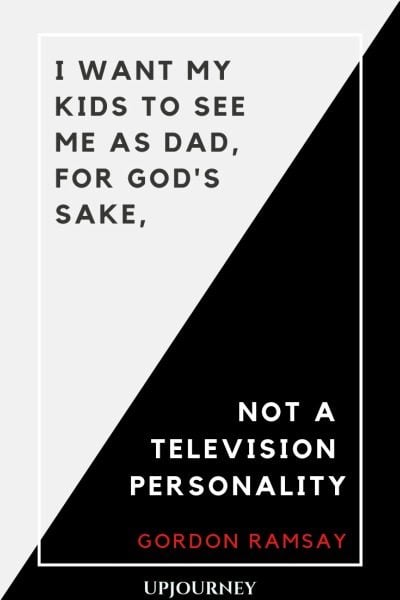 6. “I’ve never been a hands-on dad. I’m not ashamed to admit it, but you can’t run a restaurant and be home for tea at 4:30 and bath and change nappies.”

7. “I think every chef, not just in America, but across the world, has a double-edged sword – two jackets, one that’s driven, a self-confessed perfectionist, thoroughbred, hate incompetence and switch off the stove, take off the jacket and become a family man.”

2. “When you cook under pressure, you trade perfection.”

3. “I don’t like looking back. I’m always constantly looking forward. I’m not the one to sort of sit and cry over spilled milk. I’m too busy looking for the next cow.” 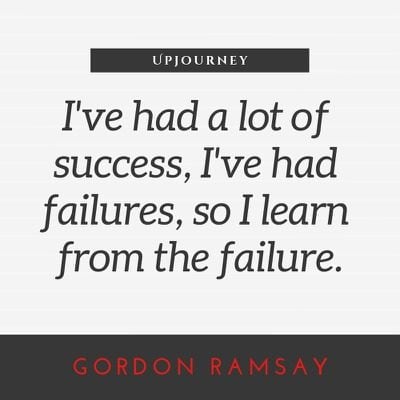 6. “The minute you start compromising for the sake of massaging somebody’s ego, that’s it, game over.”

7. “I suppose your security is your success and your key to success is your fine palate.”

8. “As a soccer player, I wanted an FA Cup winner’s medal. As an actor, you want an Oscar. As a chef, it’s three-Michelin’s stars, there’s no greater than that. So pushing yourself to the extreme creates a lot of pressure and a lot of excitement, and more importantly, it shows on the plate.”

2. “The problem with Yanks is they are wimps.”

3. “I was a naturally aggressive left-back, a cut-throat tackler.” 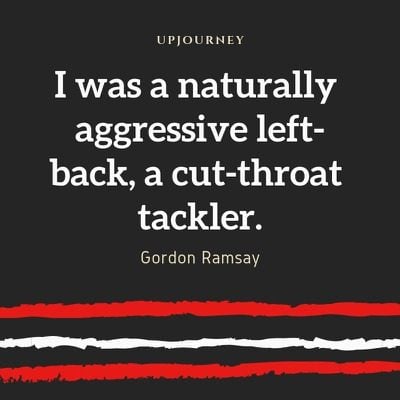 4. “I’m quite a chauvinistic person.”

5. “I won’t let people write anything they want to about me.”

6. “If I can give you one strong piece of advice when you go away for that romantic weekend, whatever you do, do not accept or take the upgrade to the honeymoon suite.”

7. “You know how arrogant the French are – extraordinary.”

9. “Running started as a way of relaxing. It’s the only time I have to myself. No phones or e-mails or faxes.”

10. “There is a level of snobbery and fickleness in L.A.” 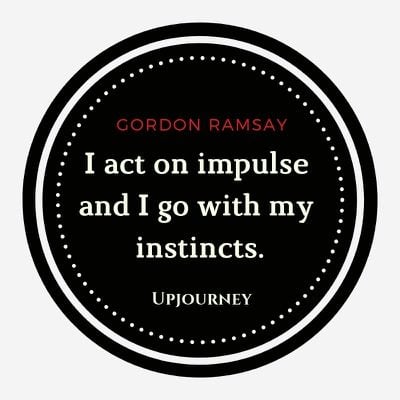 15. “I am the most unselfish chef in Britain today.”

16. “Would I swap what I have achieved as a cook if I could have been as successful as a footballer? Definitely.”

If you want to know more about the life and works of Gordon Ramsay, we would suggest you read Gordon Ramsay’s Playing with Fire: Raw, Rare to Well Done.