When you were a child, did your parents ever tell you to “Go after your dreams” or advised you to “Follow your heart”?

As you got older, did they pat you on the back and say, “It’s OK to bet on yourself”?

Yeah, mine didn’t either.

Being born into a matriarchal clan meant my practical mother was responsible for curving her children’s inclination toward non-traditional approaches to life. I must say, I caused her more grief on that score than my two sisters ever did, because I had this nagging, subconscious urge to follow my heart wherever it led, and to go after my dreams even if they vanished as I tried to grab them.

It took me a long time to understand that nagging urge, I didn’t really have a name for it until I was an adult. That’s when I began to suspect I was a dreamer. But by then, my mother’s teachings were well hammered in my mind, and I was up to my neck in the life I had created for myself.

With a bit of discomfort, I acknowledged that it would take a great deal of digging to reconnect with my heart and recover the “me” buried in responsibilities and in traditional and religious beliefs.

My name is Patricia Bossano, I am a middle child; mother of two adult kids, and I am an independent author of philosophical fiction novels.

A couple of years ago, I completed the 3rd installment in my Faerie Legacy series, which had been 22 years in the making. You’ll probably think, “boy, what a slow writer she is!” but in my defense, between 1996, when I wrote the first draft of Book I, and 2017 when I launched Book III, I raised my two children; worked as a Spanish instructor, translator & interpreter; carved a career in International Sales Operations; got divorced; lost my father to cancer; relocated my mother from South America to California; and then … more distress.

I had just turned 50, I was on my way to financial recovery after my 23-year marriage ended. I was barely getting acquainted with my new identity, and I had even started glimpsing a retirement plan when, in 2016, I lost my corporate job along with the stability it afforded me.

Feeling metaphysically cornered, I paused and took a panicked look at the post-calamity landscape.

What bubbled up from the depths was my love of the written language, which began for me in the 4th grade, and had grown over decades from scribbling journals to writing letters, short stories, and eventually two full-length novels.

Related: The 15 Best Books on Storytelling

Through narrowed eyes I gazed at the thought, bobbing and twinkling provocatively—challenging me to acknowledge my heart’s desire. As soon as I did, defensive maneuvers ensued: why had my heart’s desire been in the back burner all those years?

The ready reply was, I had to focus on family and work real jobs!

Refusing to harbor regrets at that moment in 2016, I gave in to the shudder of anticipation, even while asking myself: Should I hurry up and find my next corporate job? Or, Do I dare bet on myself and go after my dreams?

Even while the ‘s’ at the end of ‘dreams’ still hissed in my head, unbidden, came the words of a seer from months before. He had been holding Book II of my series in his hands for a few instants when he said, “The Faery Realm is destroyed in this book!” which was true, but it was also uncanny, for he had not read either of my books.

He proceeded to explain; “The women in your family, on your mother’s side, were guardians of a forest in ages past. The stories in your books are not fiction, they’re subconscious recollections from long ago.”

The indulgent smile his declaration had caused then, widened into an extravagant one that day in 2016. It was the nudge I needed, and I told myself, it is never too late to believe!

And, believe, I did. How could I not? when all along my writing about faeries had been due to a case of genetic memory being tapped.

My conviction that the time was ripe for elemental, female magic to make an entrance, washed over the hesitation created by my upbringing and my acquired routines. I took the proverbial leap of faith. I sold the only house I had ever bought on my own, transplanted myself back to California, and went after my dream of becoming a full-time writer!

Related: How to Believe in Yourself More

I persevere daily, even when it feels like I am the only one who believes in me. I’m doing what I can to get my faeries and host of supernaturals in the universe’s radar.

My dream of sharing the magic of my stories with worldwide audiences is foremost on my mind, and it is buoyed by any triumph, however small, along the way. 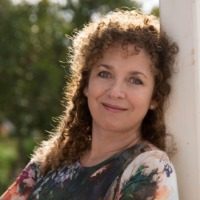 About the Author
Patricia Bossano

Patricia Bossano is an award-winning author of philosophical fantasy novels and other supernatural tales.