There’s a phenomenon that’s occurring at significantly higher rates over the past ten years in regards to the world’s largest social media platform, Facebook. It’s called the “unfriend.”

You know about the unfriend, right?

Well, this happened because two people disagree about something (usually politics or religion), and because of that disagreement, they declare, it’s no longer worth my time or energy to acknowledge you exist. And we cut them out of our digital lives. It’s very easy to do and seems to relieve some of the pressure.

The problem is that if we cut people out of our lives when they disagree with us, our circle of influence becomes so small that we only end up surrounded by people who know what we know and think like we think.

Now, as it turns out, the only things in life we can learn are things we don’t yet know.

But if we’re only surrounded by people who know what we know, then we stop learning, and society dies. Interestingly the phenomenon of unfriending on Facebook is so common that “unfriend” is now a word in the Oxford English Dictionary! That’s a problem.

How, then, do we move our society forward when it seems like we are farther away from one another than we ever have been?

Do you remember the “divided the internet” optical/auditory illusions that have come around over the years?

These illusions are fun and quirky, but they highlight that our brains are experts at assuming the missing information in situations of ambiguity. We have this phrase that we say all of the time, “Perception Equals Reality.” It’s almost cliché, but the most important thing to note is that it is not true.

Perception does not equal reality.

All you need to do is look at the definitions of these two words:

Here’s the thing: the more time we spend experiencing the world the way we do, the more our brains will expect that this (the way we see it) is the way the world actually is.

This doesn’t seem like it would be a problem—and largely, it isn’t—until we encounter or engage with someone who has had a different set of experiences and perceptions.

When we engage with someone who sees the dress differently than we do (it’s actually black and blue), it is nearly impossible to see what they see. Moreover, we begin to think there must be something wrong with them if they see something different.

This is the foundation of our current political division and discourse. We (all of us, no matter what ‘side’ we’re on) are settling into the false belief that the way in which we see the world is the one truly right way to see the world.

When someone disagrees with us, it is evidence they are unintelligent, irrational, and unreasonable.

This belief that they are irrational does nothing more than separate us from them even further. Our ideas are different, but now we believe that there is a difference in intelligence and even in morality. I don’t know about you, but having someone infer that I’m stupid is not my preferred path to building a relationship.

I spend a lot of time talking with folks of all political stripes, and I see the same arguments repeatedly.

That’s exactly what I’m talking about.

These differences in perception are cute when we’re talking about optical illusions, but when we realize how deeply they impact us on a global scale, it becomes clear why our world is increasingly polarized.

Related: What Is Politics and Why Is It Important?

This concept of teaming introduces another psychological phenomenon called “the empathy gap.” This is the experience where we do not feel empathy for someone because we are on different teams.

This isn’t to say we don’t experience empathy or that we have no heart, but rather, when we perceive that we are on opposing teams or groups from another person, our brains actually do not experience empathy in the same way that we would if the team division didn’t exist.

Here are two political examples of this empathy gap. I don’t know if you have been keeping up with global news, but there is a virus going around.

As of this writing, associated complications from this virus have led to the unfortunate end of life to nearly 4,000,000 citizens of the planet. No matter how we feel about the validity of these numbers or the ferocity of this virus, I’m pretty sure we can all agree that we wouldn’t wish for anyone to contract this virus.

Empathy in the English language comes from the greek empatheia with roots “En” and “Pathos.” En means IN, and Pathos means feeling or suffering. So empathy means getting inside of someone’s feelings or their suffering.

When we empathize with someone, we are feeling what they’re feeling. When we act with empathy, we are informed by their feelings or suffering and behave in a mindful way.

So when hearing of someone who has become infected with a virus, we can empathize, wish them well, and offer spiritual, emotional, or even logistical support. We experience empathy because a fellow human is potentially feeling something profound or suffering.

But that isn’t always the case. In the Fall of 2020, a 74-year-old man contracted the virus. After a few days, he was admitted to the hospital. People celebrated. As it turns out, this man was the President of the United States, and some people actually celebrated that a human contracted this virus.

They celebrated because they perceived that they were on a different team than him. And because of that perception, their typical empathy did motivate their actions—they experienced Empathy Gap.

Similarly, a few months later, the President-Elect of the United States broke his ankle. I don’t know if you’ve ever broken an ankle or any bone for that matter, but it is not enjoyable in any way. People celebrated.

Again, some people perceived that they were on different teams, and the typical empathy that would compel their kindness did not apply—they experienced Empathy Gap.

The Empathy Gap is actually quite natural in terms of psychology and anthropology. We associate stronger and more positive relationships with people that we perceive we have more in common with, our “In Group” and find it easier to generalize and pay less attention to those we are not associated with.

The insidious nature of the Empathy Gap is that when we encounter someone outside of our group, with a different opinion than ours, instead of displaying understanding or empathy, we are prone to assign negative character judgments to them.

Related: Compassion vs Empathy vs Sympathy. What’s the Difference?

So if you are on the blue team and you engage with someone from the red team, you are more likely to think things like, “They are rude/ mean/ evil,” or “They have no regard for other people.” If you have ever fallen victim to these kinds of character assassination, you know that it hurts much deeper than expected.

Over the past few decades, our political discourse has turned from polite disagreement to passionate battles for the claim of righteousness.

When we find that there is something that we disagree on, it is our opportunity to reach out and try to understand the humanity of the person on the other side.

What life stories and experiences do they have that I don’t know? Experiences that surely helped them shape their opinion. If we show up with Radical Curiosity, we can begin the process of restoring the ability of our society to communicate.

When you find yourself in a debate with someone who disagrees with you politically, I implore you to say this, “I know that we have a difference of opinion. We both probably think that we’re right and the other is wrong. But I’d like to explore this conversation with curiosity instead of fighting. Why are you so passionate about your position?”

This last piece, “why are you so passionate about your position?” does a number of powerful things.

So what you’re not saying is, “why are you so obsessed with your point of view?” or “please tell me all of the facts and data that proves that you are right.”

Have you ever had the experience of being fully and completely understood by someone? It feels absolutely incredible. What would the world look like if we spent more time feeling understood by the people around us? That’s what we’re trying to accomplish here.

If we spend more time expressing empathy for each other and understanding each other, we create an environment where more and more people feel understood.

The more people feel understood, the more they will work to understand us. The path toward healing our political divisiveness is to validate and appreciate the humanity of the people around us, rather than assuming the worst and tearing it down.

Eric M. Bailey is the bestselling author of The Cure for Stupidity: Using Brain Science to Explain Irrational Behavior and President of Bailey Strategic Innovation Group, one of the fastest-growing human communication consulting firms in the United States.

Eric is the creator of the Principles of Human Understanding™, a leadership and communication methodology based in brain science and psychology. Eric’s unique style blends fact and emotion and finds ways to appeal to the analytical thinkers, the emotional feelers, and everyone in between.

Eric has a Master’s degree in Leadership and Organizational Development from Saint Louis University and is a lifetime learner of human and organizational behavior. When not working or researching, you can find Eric and his wife Jamie racing on their road bikes, being cheered on by their three children. 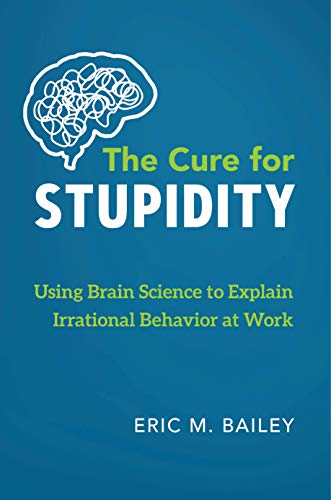 The Cure for Stupidity: Using Brain Science to Explain Irrational Behavior at Work
$19.95
Buy on Amazon