Isaac Asimov was a Russian-American writer and professor. He is one of the most prolific writers in the 20th century, writing nearly 500 books in his lifetime. Asimov is best known for his science fiction novels like I, Robot, and the Foundation series.

On January 2, 1920, Asimov was born in Petrovichi, Russia, to Anna and Judah Ozimov. The family then emigrated to America when Asimov was a toddler, living somewhere in Brooklyn, New York. At the age of five, Asimov has taught himself to read. Ten years later, he entered Columbia University, where he earned his bachelor’s degree. Asimov also completed his masters and Ph.D. in the same university.

Despite his stellar academic credentials, Asimov’s passion was writing. In 1938, he sold his first short story “Marooned Off Vesta” and published in Amazing Stories. More than ten years later, Asimov published one of his best works, I, Robot. He would then be credited for coming up with the term “robotics.”

Throughout his life, Asimov received several awards and accolades. In 1966, he was the recipient of the one-time Hugo Award for “Best All-Time Series” for his work, the Foundation series. Asimov was also granted 14 honorary doctorate degrees from different universities.

We have collected some of the best Isaac Asimov quotes and sayings that reveal his thoughts on writing, science and technology, life, and many more.

1. “Science fiction writers foresee the inevitable, and although problems and catastrophes may be inevitable, solutions are not.”

2. “Writing, to me, is simply thinking through my fingers.” 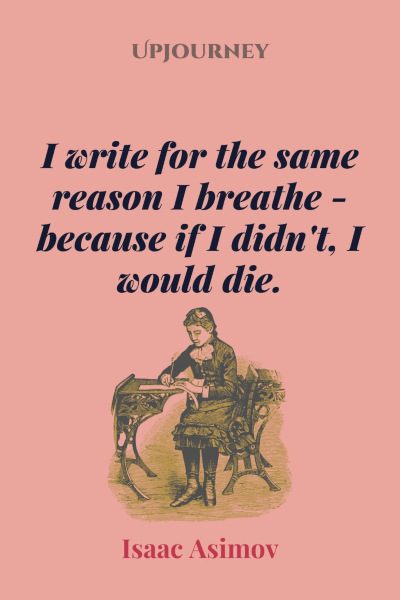 2. “All sorts of computer errors are now turning up. You’d be surprised to know the number of doctors who claim they are treating pregnant men.”

3. “The most exciting phrase to hear in science, the one that heralds new discoveries, is not ‘Eureka!’ but ‘That’s funny…'”

4. “Part of the inhumanity of the computer is that, once it is competently programmed and working smoothly, it is completely honest.” 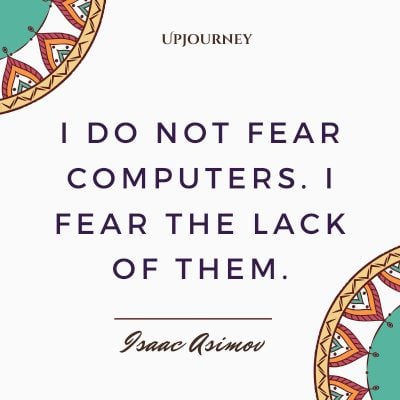 1. “Dalton’s records, carefully preserved for a century, were destroyed during the World War II bombing of Manchester. It is not only the living who are killed in war.”

2. “He had read much, if one considers his long life; but his contemplation was much more than his reading. He was wont to say that if he had read as much as other men he should have known no more than other men.”

3. “I don’t believe in an afterlife, so I don’t have to spend my whole life fearing hell, or fearing heaven even more. For whatever the tortures of hell, I think the boredom of heaven would be even worse.”

5. “And above all things, never think that you’re not good enough yourself. A man should never think that. My belief is that in life people will take you at your own reckoning.”

6. “There is a cult of ignorance in the United States, and there has always been. The strain of anti-intellectualism has been a constant thread winding its way through our political and cultural life, nurtured by the false notion that democracy means that my ignorance is just as good as your knowledge.” 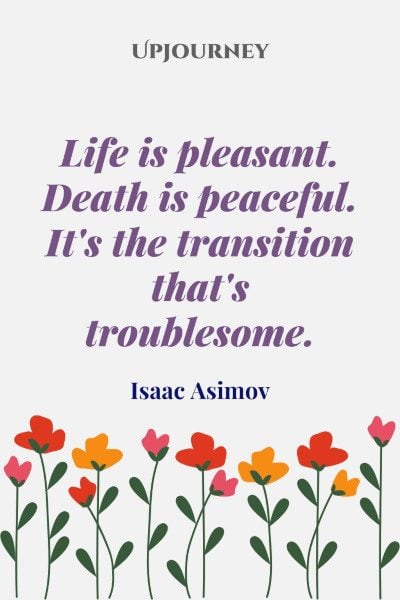 8. “John Dalton’s records, carefully preserved for a century, were destroyed during the World War II bombing of Manchester. It is not only the living who are killed in war.”

1. “I don’t believe in personal immortality; the only way I expect to have some version of such a thing is through my books.”

4. “If knowledge can create problems, it is not through ignorance that we can solve them.”

5. “Meanwhile, fears of universal disaster sank to an all time low over the world.”

6. “Humanity has the stars in its future, and that future is too important to be lost under the burden of juvenile folly and ignorant superstition.”

7. “If my doctor told me I had only six minutes to live, I wouldn’t brood. I’d type a little faster.”

8. “Self-education is, I firmly believe, the only kind of education there is.”

9. “Creationists make it sound as though a ‘theory’ is something you dreamed up after being drunk all night.” 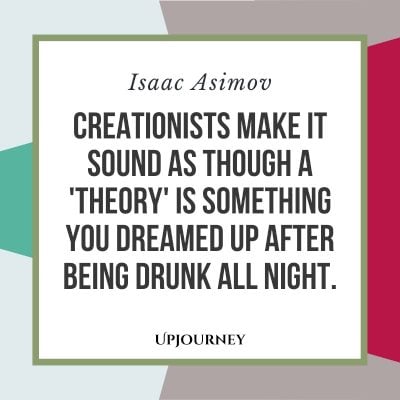 10. “To insult someone we call him ‘bestial. For deliberate cruelty and nature, ‘human’ might be the greater insult.”

11. “Never let your sense of morals get in the way of doing what’s right.”

12. “When I read about the way in which library funds are being cut and cut, I can only think that American society has found one more way to destroy itself.”

13. “A subtle thought that is in error may yet give rise to fruitful inquiry that can establish truths of great value.”

14. “The true delight is in the finding out rather than in the knowing.”

15. “It pays to be obvious, especially if you have a reputation for subtlety.”

16. “To surrender to ignorance and call it God has always been premature, and it remains premature today.”

17. “Individual science fiction stories may seem as trivial as ever to the blinder critics and philosophers of today – but the core of science fiction, its essence has become crucial to our salvation if we are to be saved at all.”

18. “People who think they know everything are a great annoyance to those of us who do.”

19. “Violence is the last refuge of the incompetent.” 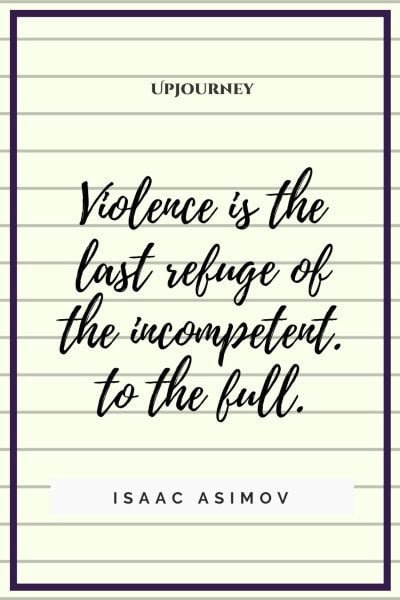 20. “Those people who think they know everything are a great annoyance to those of us who do.”

21. “It takes more than capital to swing business. You’ve got to have the A. I. D. degree to get by – Advertising, Initiative, and Dynamics.”

22. “It is change, continuing change, inevitable change, that is the dominant factor in society today. No sensible decision can be made any longer without taking into account not only the world as it is, but the world as it will be.”

23. “Suppose that we are wise enough to learn and know – and yet not wise enough to control our learning and knowledge, so that we use it to destroy ourselves? Even if that is so, knowledge remains better than ignorance.”

If you’d like to read some of Isaac Asimov’s works, we recommend you start with Foundation.