Robinson had an outstanding 10-year MLB career. In 1947, he won the inaugural MLB Rookie of the Year Award and was an All-Star for six consecutive seasons. In 1949, he also won the National League Most Valuable Player Award—the very first black player to ever receive it.

In 15th of April 2004, MLB also adopted a new annual tradition namely, “Jackie Robinson Day,” on which every player on every team wears No. 42, which was his uniform number.

He had an unquestionable talent and unwavering character which significantly influenced the culture of the civil rights movement. In the 1960s, Robinson helped organize and establish the Freedom National Bank, an African-American-owned financial institution based in New York.

After he passed away in 1972, Robinson was posthumously awarded the Presidential Medal of Freedom as well as the Congressional Gold Medal. Listed below are some of the most notable Jackie Robinson quotes and sayings that explores his thoughts and views regarding life, sports, and more.

1. “A life is not important except in the impact it has on other lives.” 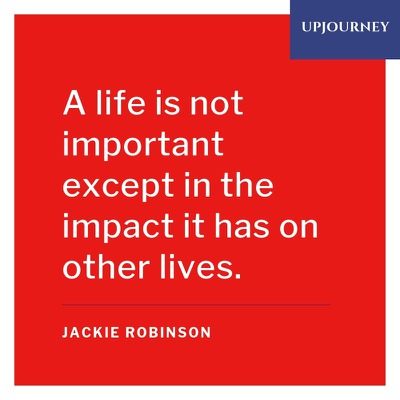 2. “There’s not an American in this country free until every one of us is free.”

4. “How you played in yesterday’s game is all that counts.”

5. “I’m not concerned with your liking or disliking me… All I ask is that you respect me as a human being.”

6. “Pop flies, in a sense, are just a diversion for a second baseman. Grounders are his stock trade.”

7. “It kills me to lose. If I’m a troublemaker, and I don’t think that my temper makes me one, then it’s because I can’t stand losing. That’s the way I am about winning, all I ever wanted to do was finish first.” 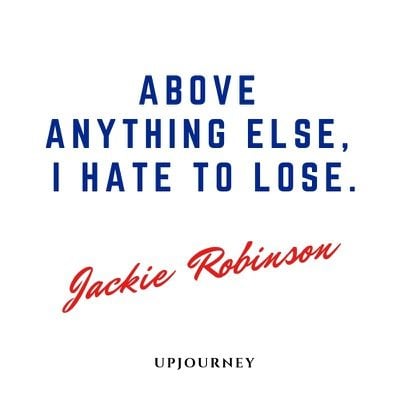 10. “Life is not a spectator sport. If you’re going to spend your whole life in the grandstand just watching what goes on, in my opinion, you’re wasting your life.”

11. “The right of every American to first-class citizenship is the most important issue of our time.”

If you would like to learn more about the life and work of the talented Jackie Robinson, we would suggest you read, I Never Had It Made: An Autobiography of Jackie Robinson.