James Byron Dean, popularly known as James Dean, was a well-known American actor from Marion, Indiana. He is recognized as a cultural icon of teenage social estrangement and disillusionment.

Before he entered the world of acting and entertainment, Dean was known to be an exceptional and popular student. He also played baseball and basketball, studied drama, and competed in public speaking contests. After Dean graduated High School, he enrolled in Santa Monica College in California and majored in pre-law. However, that didn’t last long as he transferred to UCLA and changed his major to drama.

While at UCLA, Dean was selected from a group of 350 actors to portray Malcolm in Macbeth, and in January of 1951, he dropped out of UCLA to pursue a full-time career as an actor. From then on, he starred in various films including East of Eden in 1955, Giant in 1956, and his most celebrated film Rebel Without a Cause in 1955.

After his death in a car crash on September 30, 1955, Deam received a posthumous Academy Award nomination for Best Actor. He became the first actor to obtain such award and remains the only one to have received two such posthumous nominations.

James Dean remains one of the most beloved and iconic actors in Hollywood’s history. From personal thoughts to movie lines, here are the top 26 James Dean quotes and sayings that came to define his legacy.

1. “My purpose in life does not include a hankering to charm society.”

2. “If a man can bridge the gap between life and death, if he can live on after he’s dead, then maybe he was a great man.”

3. “Death can’t be considered because, if you’re afraid to die, there’s no room in your life to make discoveries.”

4. “You try to be yourself, do only what you’ve always done and like to do, and right away, you’re tagged as an oddball.”

5. “There is no way to be truly great in this world. We are all impaled on the crook of conditioning.” 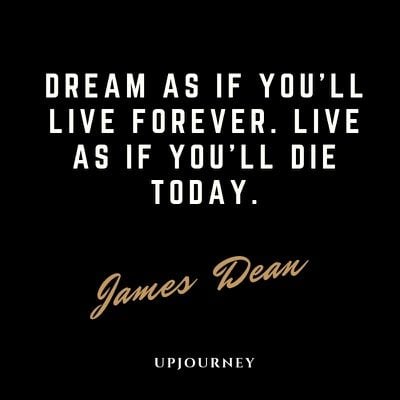 7. “Only the gentle are ever really strong.”

1. “To grasp the full significance of life is the actor’s duty; to interpret it his problem, and to express it his dedication.”

2. “To me, acting is the most logical way for people’s neuroses to manifest themselves, in this great need we all have to express ourselves.”

3. “The only way to make a scene realistic is to do it the way you know it would really happen.”

4. “An actor should be judged by his performance only.” 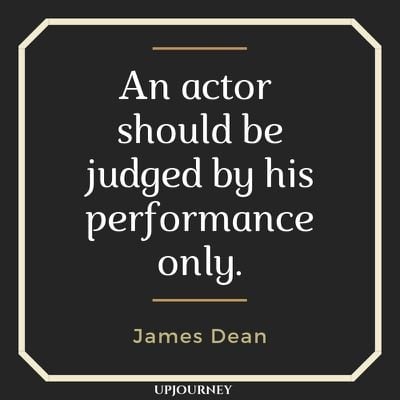 5. “Being an actor is the loneliest thing in the world. You are all alone with your concentration and imagination, and that’s all you have.”

6. “To my way of thinking, an actor’s course is set even before he’s out of the cradle.”

7. “An actor must interpret life, and in order to do so must be willing to accept all the experiences life has to offer. In fact, he must seek out more of life than life puts at his feet.”

8. “When an actor plays a scene exactly the way a director orders, it isn’t acting. It’s following instructions. Anyone with the physical qualifications can do that.”

9. “Being a good actor isn’t easy. Being a man is even harder. I want to be both before I’m done.”

3. “The only greatness for man is immortality.”

4. “But you can’t show some far off idyllic conception of behavior if you want the kids to come and see the picture. You’ve got to show what it’s really like, and try to reach them on their own grounds.”

5. “I also became close to nature, and am now able to appreciate the beauty with which this world is endowed.”

6. “I used to fly around quite a bit, you know? I took a lot of unnecessary chances on the highways. And I started racing, and now I drive on the highways, I’m extra cautious because no one knows what they’re doing half the time. You don’t know what this guy is going to do or that one.”

7. “I think the one thing this picture shows that’s new is the psychological disproportion of the kids’ demands on the parents. Parents are often at fault, but the kids have some work to do, too.”

8. “Trust and belief are two prime considerations. You must not allow yourself to be opinionated.” 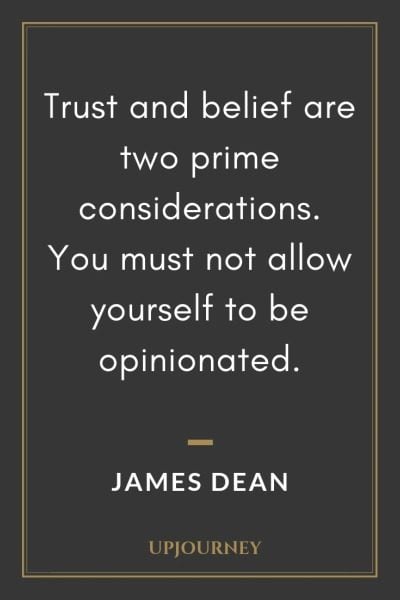 10. “The gratification comes in the doing, not in the results.”

If you’d like to know more about the life of the iconic James Dean, we would suggest you read The Real James Dean: Intimate Memories from Those Who Knew Him Best.