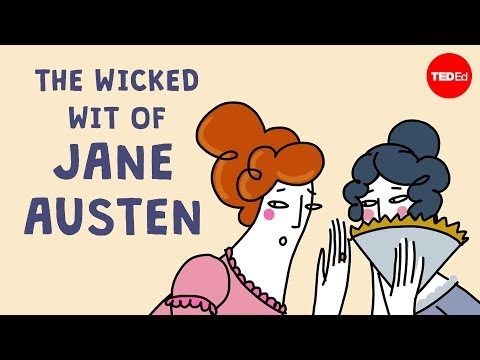 Born in Steventon, Hampshire, in 1775, Austen was the daughter of George and Cassandra. The family was open to one another and encouragement of intellectual development. Social and political ideas were occasionally discussed. Along with Austen’s sister, they were sent to Oxford and educated by Mrs. Ann Crawley.

At a young age, Austen wrote short stories and poems for her amusement. However, she was 36 when she published her first novel, Sense, and Sensibility, anonymously. Throughout her life, Austen’s works brought her little fame and only a moderate success.

Sixteen years after her death, her reputation changed in 1833 when Austen’s works were republished and sold as a set. Steadily, Austen’s readership grew gained wider acclaim. Her works have been a subject of countless critical essays and literal anthologies. Her novels have also inspired many films and mini-series, including 1940’s Pride and Prejudice, Mansfield Park (1999), Pride and Prejudice (2005), and Love and Friendship (2016).

Get to know this amazing woman through some of the best and famous Jane Austen quotes and sayings that explore her views on life, love, women, and many more.

1. “I have been a selfish being all my life, in practice, though not in principle.”

2. “To look almost pretty is an acquisition of higher delight to a girl who has been looking plain for the first fifteen years of her life than a beauty from her cradle can ever receive.”

3. “I could not sit down to write a serious romance under any other motive than to save my life.”

4. “Life seems but a quick succession of busy nothings.” 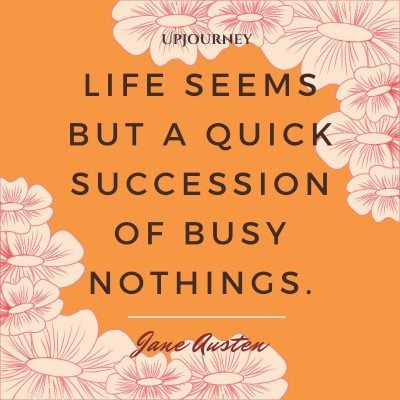 5. “They are much to be pitied who have not been given a taste for nature early in life.”

2. “There is no charm equal to tenderness of heart.”

3. “There is safety in reserve, but no attraction. One cannot love a reserved person.”

4. “Friendship is certainly the finest balm for the pangs of disappointed love.”

5. “Next to being married, a girl likes to be crossed in love a little now and then.”

6. “The more I know of the world, the more I am convinced that I shall never see a man whom I can really love.” 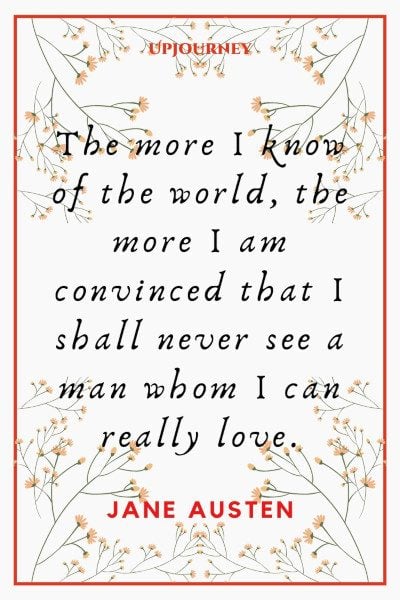 7. “One does not love a place the less for having suffered in it, unless it has been all suffering, nothing but suffering.”

8. “Is not general incivility the very essence of love?”

9. “A lady’s imagination is very rapid; it jumps from admiration to love, from love to matrimony in a moment.”

10. “To be fond of dancing was a certain step towards falling in love.”

1. “Good-humored, unaffected girls, will not do for a man who has been used to sensible women. They are two distinct orders of being.”

2. “There are certainly not so many men of large fortune in the world, as there are pretty women to deserve them.”

3. “An engaged woman is always more agreeable than a disengaged. She is satisfied with herself. Her cares are over, and she feels that she may exert all her powers of pleasing without suspicion. All is safe with a lady engaged; no harm can be done.”

4. “Single women have a dreadful propensity for being poor. Which is one very strong argument in favor of matrimony.”

5. “Woman is fine for her own satisfaction alone. No man will admire her the more, no woman will like her the better for it. Neatness and fashion are enough for the former, and a something of shabbiness or impropriety will be most endearing to the latter.”

6. “No man is offended by another man’s admiration of the woman he loves; it is the woman only who can make it a torment.”

7. “It is always incomprehensible to a man that a woman should ever refuse an offer of marriage.” 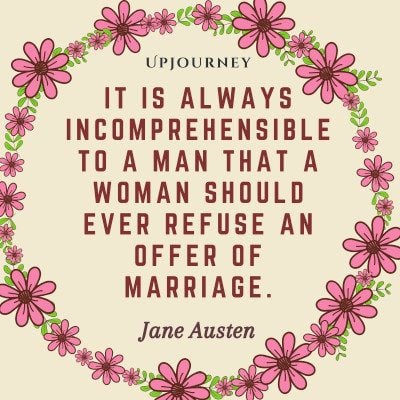 8. “A woman, especially, if she have the misfortune of knowing anything, should conceal it as well as she can.”

9. “In nine cases out of ten, a woman had better show more affection than she feels.”

10. “It sometimes happens that a woman is handsomer at twenty-nine than she was ten years before.”

11. “A man would always wish to give a woman a better home than the one he takes her from; and he who can do it, where there is no doubt of her regard, must, I think, be the happiest of mortals.”

12. “A single woman with a very narrow income must be a ridiculous, disagreeable old maid – the proper sport of boys and girls; but a single woman of good fortune is always respectable, and may be as sensible and pleasant as anybody else.”

1. “What wild imaginations one forms where dear self is concerned! How sure to be mistaken!”

2. “Every man is surrounded by a neighborhood of voluntary spies.”

3. “There is nothing like staying at home for real comfort.”

4. “Respect for right conduct is felt by every body.”

5. “Human nature is so well disposed towards those who are in interesting situations, that a young person, who either marries or dies, is sure of being kindly spoken of.”

6. “General benevolence, but not general friendship, made a man what he ought to be.” 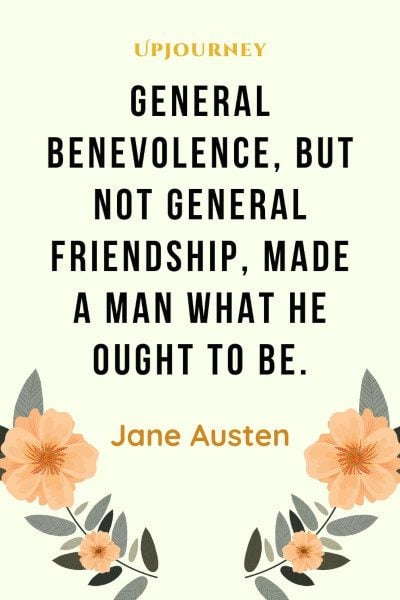 7. “We do not look in our great cities for our best morality.”

8. “Vanity working on a weak head, produces every sort of mischief.”

9. “Men have had every advantage of us in telling their own story. Education has been theirs in so much higher a degree; the pen has been in their hands. I will not allow books to prove anything.”

10. “Nothing ever fatigues me but doing what I do not like.”

11. “Dress is at all times a frivolous distinction, and excessive solicitude about it often destroys its own aim.”

12. “To flatter and follow others, without being flattered and followed in turn, is but a state of half enjoyment.”

13. “Nobody, who has not been in the interior of a family, can say what the difficulties of any individual of that family may be.”

15. “A person who can write a long letter with ease, cannot write ill.”

16. “One half of the world cannot understand the pleasures of the other.” 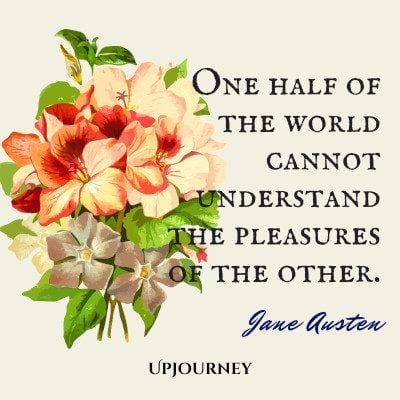 17. “The power of doing anything with quickness is always prized much by the possessor, and often without any attention to the imperfection of the performance.”

18. “Where youth and diffidence are united, it requires uncommon steadiness of reason to resist the attraction of being called the most charming girl in the world.”

19. “Surprises are foolish things. The pleasure is not enhanced, and the inconvenience is often considerable.”

20. “Business, you know, may bring you money, but friendship hardly ever does.”

21. “One cannot be always laughing at a man without now and then stumbling on something witty.”

22. “Those who do not complain are never pitied.”

23. “My sore throats are always worse than anyone’s.”

24. “There are people, who the more you do for them, the less they will do for themselves.”

25. “It is happy for you that you possess the talent of flattering with delicacy. May I ask whether these pleasing attentions proceed from the impulse of the moment, or are they the result of previous study?”

26. “A large income is the best recipe for happiness I ever heard of.” 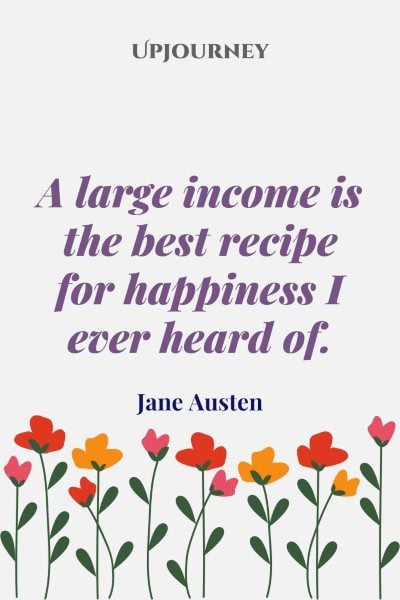 28. “I cannot speak well enough to be unintelligible.”

29. “Vanity and pride are different things, though the words are often used synonymously. A person may be proud without being vain. Pride relates more to our opinion of ourselves; vanity, to what we would have others think of us.”

30. “Give a girl an education and introduce her properly into the world, and ten to one but she has the means of settling well, without further expense to anybody.”

31. “A mind lively and at ease, can do with seeing nothing, and can see nothing that does not answer.”

32. “For what do we live, but to make sport for our neighbors and laugh at them in our turn?”

33. “I am afraid that the pleasantness of an employment does not always evince its propriety.”

34. “Seldom, very seldom, does complete truth belong to any human disclosure seldom can it happen that something is not a little disguised, or a little mistaken.”

35. “Husbands and wives generally understand when opposition will be vain.”

36. “Where an opinion is general, it is usually correct.” 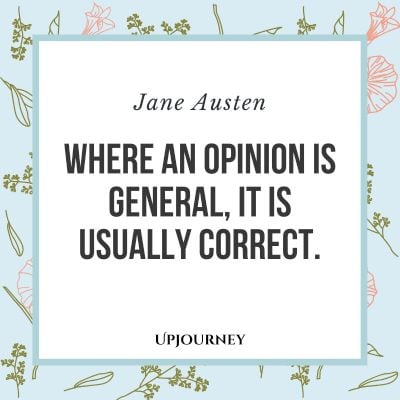 37. “To sit in the shade on a fine day and look upon verdure is the most perfect refreshment.”

38. “Oh! do not attack me with your watch. A watch is always too fast or too slow. I cannot be dictated to by a watch.”

39. “My idea of good company is the company of clever, well-informed people who have a great deal of conversation that is what I call good company.”

41. “How quick come the reasons for approving what we like!”

42. “Walter Scott has no business to write novels, especially good ones. It is not fair. He has fame and profit enough as a poet, and should not be taking the bread out of the mouths of other people.”

43. “My idea of good company is the company of clever, well-informed people who have a great deal of conversation; that is what I call good company.”

44. “Nothing is more deceitful than the appearance of humility. It is often only carelessness of opinion, and sometimes an indirect boast.”

46. “We have all a better guide in ourselves, if we would attend to it, than any other person can be.” 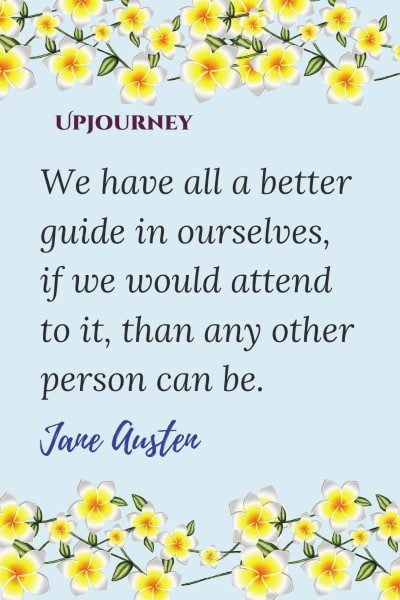 47. “I do not want people to be very agreeable, as it saves me the trouble of liking them a great deal.”

48. “Happiness in marriage is entirely a matter of chance.”

49. “Think only of the past as its remembrance gives you pleasure.”

50. “Men have had every advantage of us in telling their own story. Education has been theirs in so much higher a degree the pen has been in their hands. I will not allow books to prove anything.”

51. “It will, I believe, be everywhere found, that as the clergy are, or are not what they ought to be, so are the rest of the nation.”

52. “Selfishness must always be forgiven you know, because there is no hope of a cure.”

53. “An artist cannot do anything slovenly.”

54. “Seldom, very seldom, does complete truth belong to any human disclosure; seldom can it happen that something is not a little disguised, or a little mistaken.”

55. “Let other pens dwell on guilt and misery.”

56. “It is a truth universally acknowledged, that a single man in possession of a good fortune, must be in want of a wife.” 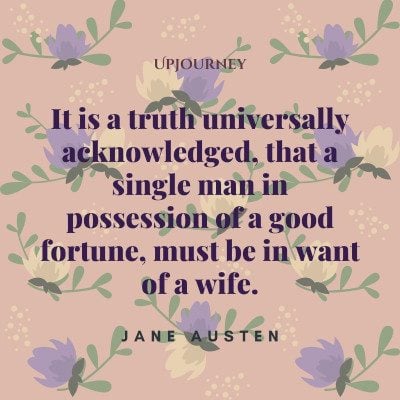 57. “The person, be it gentleman or lady, who has not pleasure in a good novel, must be intolerably stupid.”

58. “There is something so amiable in the prejudices of a young mind, that one is sorry to see them give way to the reception of more general opinions.”

59. “If things are going untowardly one month, they are sure to mend the next.”

61. “Nobody minds having what is too good for them.”

If you’d like to read some of Jane Austen’s best works, we recommend you start with Emma, Sense & Sensibility, and Pride & Prejudice.