Jim Carrey is known as one of the greatest comedians to appear on the big screen. Aside from doing comedy, he is also a screenwriter, impressionist, musician, painter, and producer.

Though he may appear as an easy-go-lucky guy on-screen, he didn’t always have it easy. However, despite all the trials in his life, he remained a true believer in the law of attraction.

He worked very hard to get to where he is and aced every movie he played. By late 1990s, he earned two Golden Globe Best Actor Awards for his serious roles in The Truman Show (1998) and the Man on the Moon (1999). From then on, he gained more popularity and fame.

Here are 66 of the most inspiring Jim Carrey quotes and sayings that will change your views on life, fortune, fame, fun, and love.

1. “I’m a hard guy to live with. I’m like a caged animal. I’m up all night walking around the living room. It’s hard for me to come down from what I do.” 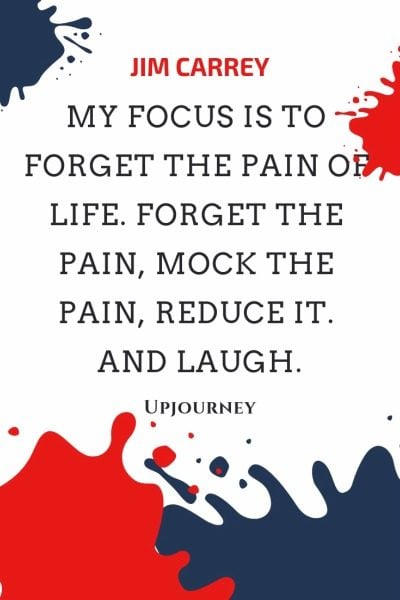 3. “For some reason, I did something where I realized I could get a reaction. That was when I broke out of my shell at school because I really didn’t have any friends or anything like that and I just kind of was going along, and then finally I did this zany thing, and all of a sudden I had tons of friends.”

4. “Maybe other people will try to limit me but I don’t limit myself.”

6. “Before I do anything, I think, well what hasn’t been seen. Sometimes, that turns out to be something ghastly and not fit for society. And sometimes that inspiration becomes something that’s really worthwhile.”

7. “I’ve arrived at the place if I’m not taking a career risk, I’m not happy. If I’m scared, then I know I’m being challenged.”

8. “I tend to stay up late, not because I’m partying but because it’s the only time of the day when I’m alone and don’t have to be performing.”

9. “Creative people don’t behave very well generally. If you’re looking for examples of good relationships in show business, you’re gonna be depressed real fast. I don’t have time for anything else right now but work and my daughter. She’s my first priority.”

11. “It is better to risk starving to death than surrender. If you give up on your dreams, what’s left?”

13. “I don’t think human beings learn anything without desperation. Desperation is a necessary ingredient to learning anything or creating anything. Period. If you ain’t desperate at some point, you ain’t interesting.”

14. “I really believe in the philosophy that you create your own universe. I’m just trying to create a good one for myself.” 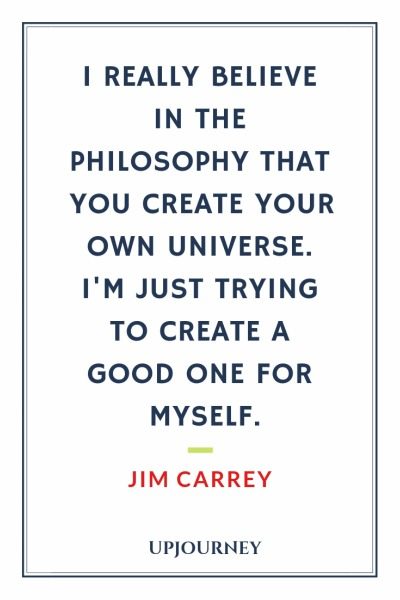 15. “I love playing the ego and insecurity combined.”

16. “I’m very serious about no alcohol, no drugs. Life is too beautiful.”

17. “Life is an ordeal, albeit an exciting one, but I wouldn’t trade it for the good old days of poverty and obscurity.”

19. “Life opens up opportunities to you, and you either take them or you stay afraid of taking them.”

20. “If you aren’t in the moment, you are either looking forward to uncertainty, or back to pain and regret.”

1. “I’m so wrapped up in my work that it’s often impossible to consider other things in my life. My marriage ended in divorce because of this, my relationship with Holly has suffered by this.”

2. “I think I could go away tomorrow. I’ve already accomplished something. It’s such a selfish business that sometimes I get sick of myself.”

3. “Some nights it was a melee, literally, where I’d be standing trying to defend myself for what I was doing. People would be screaming at me to do my old act, and getting actually violent and angry at me.”

5. “One thing I hope I’ll never be is drunk with my own power. And anybody who says I am will never work in this town again.” 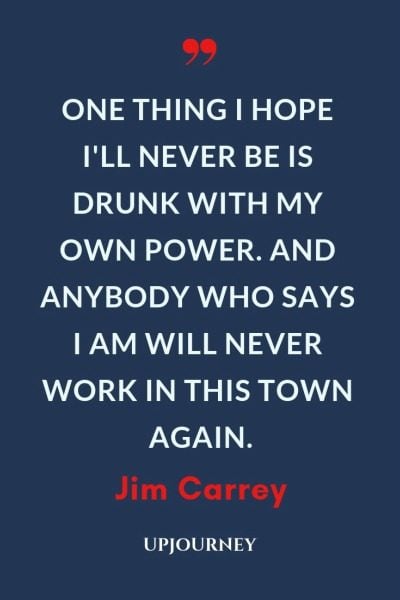 6. “I wake up some mornings and sit and have my coffee and look out at my beautiful garden, and I go, Remember how good this is. Because you can lose it.”

7. “Ever since I started to get the recognition I’ve picked out certain fans and reverse-stalked them.”

9. “When the first big paycheque with ‘Dumb And Dumber’ hit, I went: ‘Gosh, I wonder if this will affect my performance. Will I do a take and think, was that worth $7 million?’ But that never happened. If anything, it made me rebel against that thing when people who get rich start playing it safe.”

10. “I refuse to feel guilty. I feel guilty about too much in my life but not about money. I went through periods when I had nothing, so somebody in my family has to get stinkin’ wealthy.”

11. “I don’t care if people think I am an overactor, as long as they enjoy what I do. People who think that would call Van Gogh an overpainter.”

12. “I’m the first to admit this whole salary thing is getting out of control. In the final analysis, it’s still about the work.”

13. “I haven’t been as wild with my money as somebody like me might have been. I’ve been very safe, very conservative with investments. I don’t blow money. I don’t have a ton of houses. I know things can go away. I’ve already had that experience.”

14. “What I have in common with the character in ‘Truman’ is this incredible need to please people. I feel like I want to take care of everyone and I also feel this terrible guilt if I am unable to. And I have felt this way ever since all this success started.”

15. “I’ve never been one to sit back and go, I’d better do what the audience wants me to do because I don’t want to lose them.”

16. “I absolutely want to have a career where you make’em laugh and make’em cry. It’s all theater.” 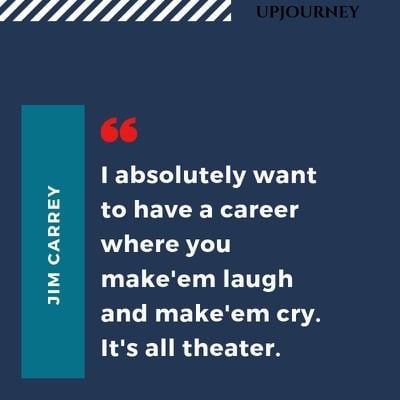 17. “That’s the trouble with being me. At this point, nobody gives a damn what my problem is. I could literally have a tumor on the side of my head and they’d be like, Yeah, big deal. I’d eat a tumor every morning for the kinda money you’re pulling down.”

18. “The money can be a hindrance to someone like me because the danger is that you start thinking, ‘Is that a $20 million take?’ That kind of thing, and being self-critical.”

19. “I need privacy. I would think that because what I do makes a lot of people happy that I might deserve a little bit of respect in return. Instead, the papers try to drag me off my pedestal.”

1. “We had problems like all families but we had a lot of love. I was extremely loved. We always felt we had each other.”

3. “I really want to love somebody. I do. I just don’t know if it’s possible forever and ever.” 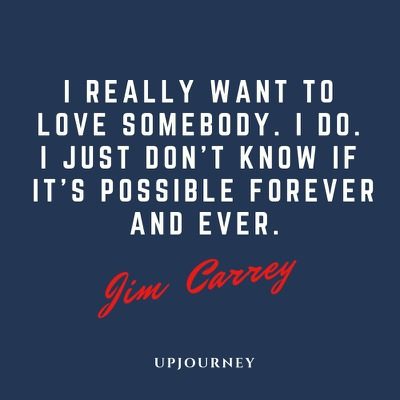 4. “It’s hard for anybody who’s been with me not to feel starved for affection when I’m making love to my ideas. Maybe it’s not meant for me to settle down and be married.”

1. “Ya know what I do almost every day? I wash. Personal hygiene is part of the package with me.”

2. “I got a lot of support from my parents. That’s the one thing I always appreciated. They didn’t tell me I was being stupid; they told me I was being funny.”

3. “My report card always said, ‘Jim finishes first and then disrupts the other students’.”

4. “Green Eggs and Ham was the story of my life. I wouldn’t eat a thing when I was a kid, but Dr. Seuss inspired me to try cauliflower!”

5. “If I had never ventured beyond being a stand-up comic, then I would be sitting in my house today working on my Leonardo DiCaprio impression.”

6. “There was a time when people said, Jim if you keep on making faces, your face will freeze like that. Now they just say, Pay him!” 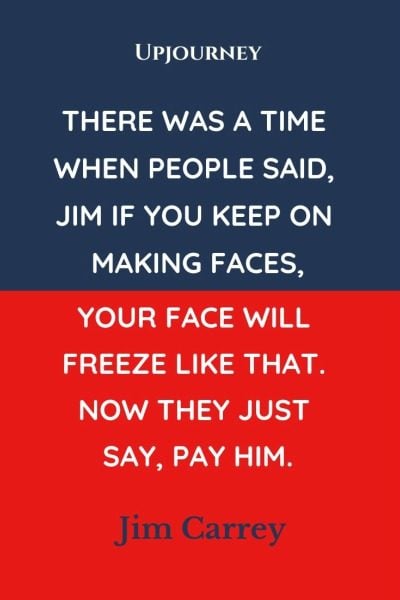 7. “You know, I live a monastic lifestyle. No, I do. I do live in extremes, basically. I go back and forth. Once every six months, I’ll have a day where I eat more chocolate than has ever been consumed by a human being.”

8. “I practiced making faces in the mirror and it would drive my mother crazy. She used to scare me by saying that I was going to see the devil if I kept looking in the mirror. That fascinated me even more, of course.”

9. “Behind every great man is a woman rolling her eyes.”

10. “I try to do something the audience might not have seen before. Like if I’m gonna kiss a girl I wanna kiss her as a girl has never been kissed. Like maybe I would kick her legs out from under her and catch her right before she hits the ground and then kisses her.”

2. “It was such a leap in my career when ‘Truman Show’ came along. It’s always been a long process for me insofar as recognition goes, but that’s OK because you appreciate it when it comes.”

3. “I used to draw a lot. If my mother would ask me to do something else, I’d have a hairy conniption. I’d just go crazy.”

4. “It’s nice to finally get scripts offered to me that aren’t the ones Tom Hanks wipes his butt with.”

5. “My upbringing in Canada made me the person I am. I will always be proud to be a Canadian.” 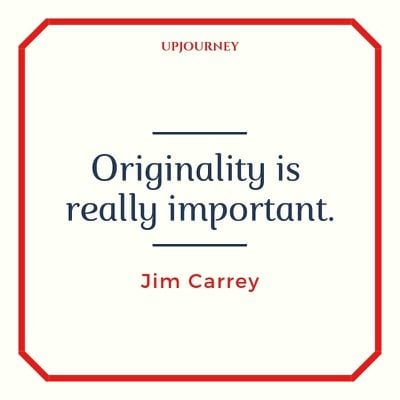 7. “I’ve tried everything. I’ve done therapy, I’ve done colonics. I went to a psychic who had me running around town buying pieces of ribbon to fill the colors in my aura. Did the Prozac thing.”

9. “My family kinda hit the skids. We were experiencing poverty at that point. We all got a job, where the whole family had to work as security guards and janitors. And I just got angry.”

10. “I know this sounds strange, but as a kid, I was really shy. Painfully shy. The turning point was freshman year when I was the biggest geek alive. No one, I mean no one, even talked to me.”

11. “Maybe there is no actual place called hell. Maybe hell is just having to listen to our grandparents breathe through their noses when they’re eating sandwiches.”

12. “My dad was like a stage mother, he always pushed me to do what I wanted.” 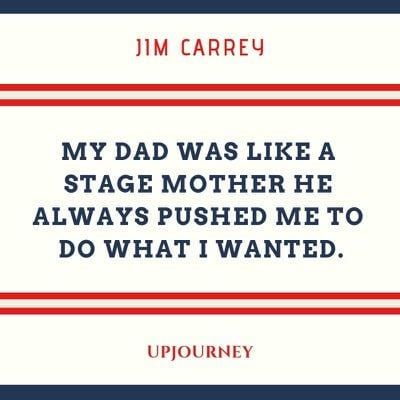 13. “My mother was a professional sick person; she took a lot of pain pills. There are many people like that. It’s just how they are used to getting attention. I always remember she’s the daughter of alcoholics who’d leave her alone at Christmas time.”

If you’d like to learn more about the life and endeavors of Jim Carrey, we would suggest you read The Essential Jim Carrey by Mary Anne Cassata.