James Marshall Hendrix was a musician, songwriter, and producer, and is regarded as one of the most influential musicians of the 20th century. He charmed and entertained his audience all over the world with his unique electric guitar skills.

Although his mainstream career spanned for only four years, he is globally regarded as one of the most prominent electric guitarists in the history of popular music.

Throughout his short career, Jimi Hendrix produced an incredible collection of songs such as “Hey Joe,” “Purple Haze,” “The Wind Cries Mary,” and a lot more. His music made him an essential figure in the history of rock music and his songs continue to influence artists and musicians today.

Here are 50 Jimi Hendrix quotes and sayings about life, music, love, and many more.

1. “When I die, just keep playing the records.”

2. “When I die, I want people to play my music, go wild and freak out and do anything they want to do.”

3. “All I’m writing is just what I feel, that’s all. I just keep it almost naked. And probably the words are so bland.”

4. “Rock is so much fun. That’s what it’s all about – filling up the chest cavities and empty kneecaps and elbows.” 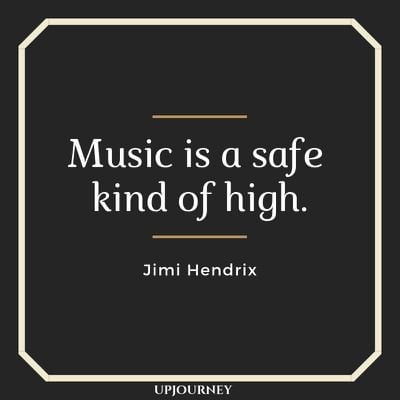 6. “The time I burned my guitar it was like a sacrifice. You sacrifice the things you love. I love my guitar.”

7. “When I played God Bless The Queen, I was wondering if they was gonna dig us, then quite naturally I’d go on and try to get it together.”

8. “Sometimes you want to give up the guitar, you’ll hate the guitar. But if you stick with it, you’re gonna be rewarded.”

9. “I just hate to be in one corner. I hate to be put as only a guitar player, or either only as a songwriter, or only as a tap dancer. I like to move around.”

10. “Music makes me high on stage, and that’s the truth. It’s like being almost addicted to music.”

11. “I wish they’d had electric guitars in cotton fields back in the good old days. A whole lot of things would’ve been straightened out.”

13. “The reflection of the world is blues, that’s where that part of the music is at. Then you got this other kind of music that’s tryin’ to come around.”

16. “Music doesn’t lie. If there is something to be changed in this world, then it can only happen through music.”

17. “Imagination is the key to my lyrics. The rest is painted with a little science fiction.”

19. “When we go to play, you flip around and flash around and everything, and then they’re not gonna see nothin’ but what their eyes see. Forget about their ears.”

20. “My goal is to be one with the music. I just dedicate my whole life to this art.”

21. “You can hypnotize people with music, and when you get them at their weakest point, you can preach into their subconscious whatever you want to say.”

1. “I don’t have nothing to regret at all in the past, except that I might’ve unintentionally hurt somebody else or something.”

2. “It’s funny how most people love the dead, once you’re dead you’re made for life.”

4. “I was trying to do too many things at the same time, which is my nature. But I was enjoying it, and I still do enjoy it.”

7. “The story of life is quicker then the blink of an eye, the story of love is hello, goodbye.”

1. “When the power of love overcomes the love of power the world will know peace.” 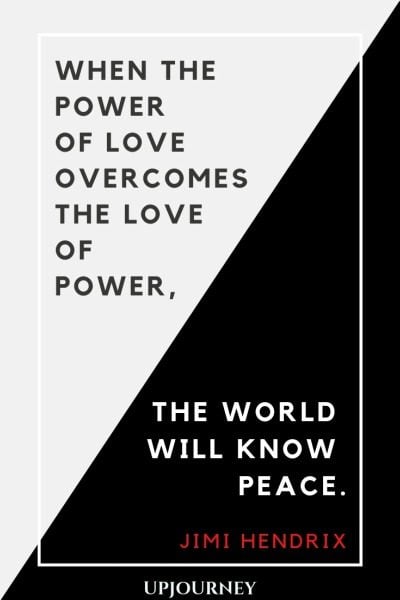 4. “The time I burned my guitar it was like a sacrifice. You sacrifice the things you love. I love my guitar.”

1. “I’m gonna put a curse on you and all your kids will be born completely naked.”

2. “I have this one little saying when things get too heavy just call me helium, the lightest known gas to man.”

3. “To be with the others, you have to have your hair short and wear ties. So we’re trying to make a third world happen, you know what I mean?”

4. “Every city in the world always has a gang, a street gang, or the so-called outcasts.”

5. “In order to change the world, you have to get your head together first.”

6. “I used to live in a room full of mirrors; all I could see was me. I take my spirit and I crash my mirrors, now the whole world is here for me to see.”

7. “Even Castles made of sand, fall into the sea, eventually.” 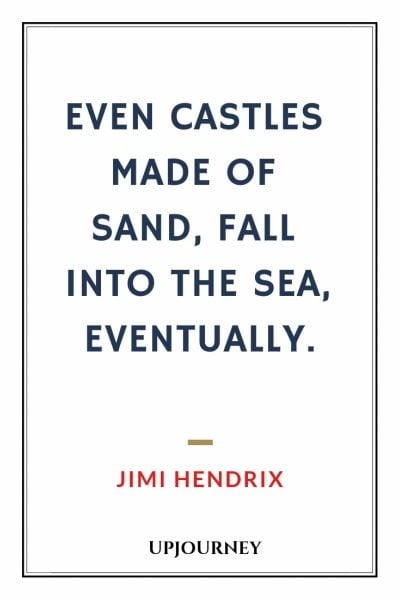 9. “When things get too heavy, just call me helium, the lightest known gas to man.”

12. “You have to give people something to dream on.”

15. “White collar conservative flashing down the street, pointing that plastic finger at me, they all assume my kind will drop and die, but I’m gonna wave my freak flag high.”

19. “If it was up to me, there wouldn’t be no such thing as the establishment.”

If you want to learn more about the life and music of the legendary Jimi Hendrix, we would suggest you read Room Full of Mirrors: A Biography of Jimi Hendrix by Charles R. Cross.