Joan of Arc, also known as “The Maid of Orléans,” is regarded as a heroine of France for her significant role during the Lancastrian phase (the third and final phase) of the Hundred Years’ War. Due to her bravery and courage, she was canonized in 1920 as a Roman Catholic saint.

In the 16th century, Joan of Arc became a symbol of the Catholic League, and in 1803 she was proclaimed a national symbol of France by the decision of Napoleon Bonaparte. Joan of Arc is one of the nine secondary patron saints of France, along with Saint Martin of Tours, Saint Denis, Saint Louis, and Saint Thérèse of Lisieux among many others.

Since the time of her death, she has remained a dignified and respected figure in literature, sculptures, and paintings. A lot of famous writers, composers, and filmmakers have produced works about her and continue to create cultural depictions of her.

We have listed some of the most notable quotes and sayings by Joan of Arc which has been compiled from her works, speeches, testimonies, poems, and transcripts.

1. “Get up tomorrow early in the morning, and earlier than you did today, and do the best that you can. Always stay near me, for tomorrow I will have much to do and more than I ever had, and tomorrow blood will leave my body above the breast.”

4. “You say that you are my judge; I do not know if you are; but take good heed not to judge me ill, because you would put yourself in great peril.” 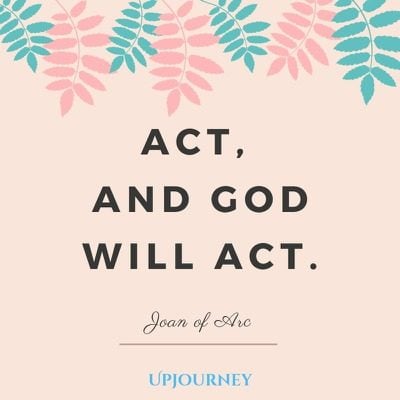 6. “I would rather die than do something which I know to be a sin, or to be against God’s will.”

7. “It is true that the king has made a truce with the Duke of Burgundy for fifteen days and that the duke is to turn over the city of Paris at the end of fifteen days. Yet you should not marvel if I do not enter that city so quickly.”

8. “About Jesus Christ and the Church, I simply know they’re just one thing.”

9. “Of the love or hatred God has for the English, I know nothing, but I do know that they will all be thrown out of France, except those who die there.”

11. “Children say that people are hung sometimes for speaking the truth.” 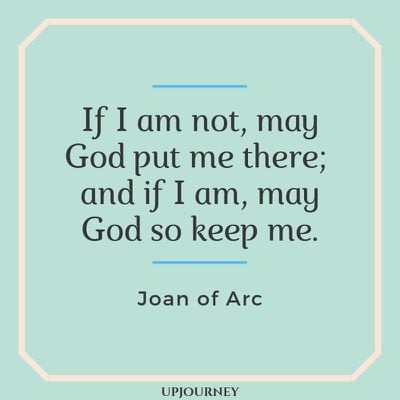 13. “I was in my thirteenth year when I heard a voice from God to help me govern my conduct. And the first time I was very much afraid.”

14. “One life is all we have and we live it as we believe in living it. But to sacrifice what you are and to live without belief, that is a fate more terrible than dying.”

Related: Most Inspirational Quotes about God

If you would like to know more about the life story of the great Joan of Arc, we would suggest you read Joan of Arc by Mark Twain.