John Muir was an influential environmentalist who advocated for the protection and preservation of the United States’ wilderness. In 1838, he was born in Scotland as the third child of Daniel Muir and Ann Gilrye. Ten years later, the family immigrated to the United States where they lived in a farm at Wisconsin called Fountain Lake Farm. Now, it is officially recognized by the country’s government as a National Historic Landmark.

At the age of 22, Muir went to the University of Wisconsin and studied geology and botany. During a nature walk where he drew some botanical sketches, his appreciation for nature grew. From then on, he wrote articles that championed environmental awareness and preservation. These articles were published by leading magazines, like Century Magazine, making him famous.

He also co-founded the Sierra Club, an organization for mountain lovers who also shared Muir’s ideals in the preservation of natural landmarks.

His camping trip with Theodore Roosevelt in Yosemite is considered as the most significant one in conservation history. Muir’s influence in the preservation of natural landmarks in the United States, such as the Yosemite National Park is why many call him the “Father of the National Parks.”

Reawaken your love for Mother Nature and read some of the most eloquent John Muir quotes that show his appreciation for nature, the mountains, and life.

1. “Take a course in good water and air, and in the eternal youth of Nature, you may renew your own. Go quietly, alone; no harm will befall you.”

2. “Trees go wandering forth in all directions with every wind, going and coming like ourselves, traveling with us around the sun two million miles a day, and through space, heaven knows how fast and far!”

3. “I never saw a discontented tree. They grip the ground as though they liked it, and though fast rooted they travel about as far as we do.”

4. “The mountains are calling and I must go.” 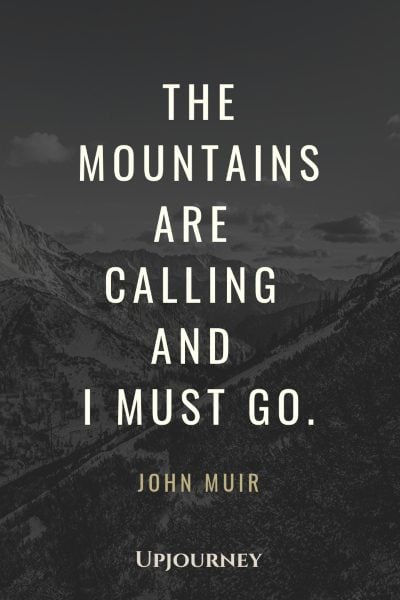 5. “How glorious a greeting the sun gives the mountains!”

6. “To the lover of wilderness, Alaska is one of the most wonderful countries in the world.”

7. “When we try to pick out anything by itself, we find it hitched to everything else in the universe.”

8. “A few minutes ago every tree was excited, bowing to the roaring storm, waving, swirling, tossing their branches in glorious enthusiasm like worship. But though to the outer ear these trees are now silent, their songs never cease.”

9. “Rocks and waters, etc., are words of God, and so are men. We all flow from one fountain Soul. All are expressions of one Love.”

10. “Everybody needs beauty as well as bread, places to play in and pray in, where nature may heal and give strength to body and soul.”

11. “One may as well dam for water tanks the people’s cathedrals and churches, for no holier temple has ever been consecrated by the heart of man.”

12. “The power of imagination makes us infinite.” 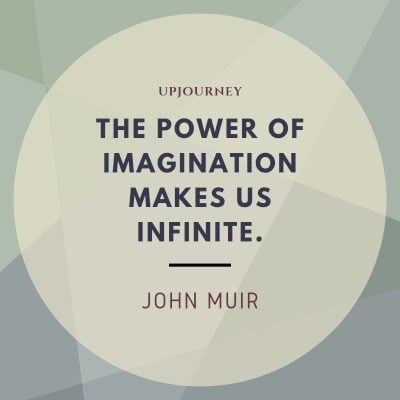 13. “Climb the mountains and get their good tidings.”

14. “Nature is ever at work building and pulling down, creating and destroying, keeping everything whirling and flowing, allowing no rest but in rhythmical motion, chasing everything in endless song out of one beautiful form into another.”

15. “God has cared for these trees, saved them from drought, disease, avalanches, and a thousand tempests and floods. But he cannot save them from fools.”

16. “The gross heathenism of civilization has generally destroyed nature and poetry, and all that is spiritual.”

17. “The clearest way into the Universe is through a forest wilderness.”

18. “In every walk with nature, one receives far more than he seeks.” 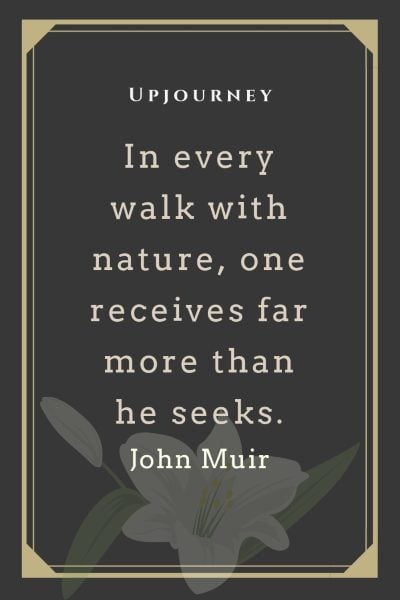 19. “Keep close to Nature’s heart… and break clear away, once in a while, and climb a mountain or spend a week in the woods. Wash your spirit clean.”

20. “There is that in the glance of a flower which may at times control the greatest of creation’s braggart lords.”

21. “Going to the woods is going home, for I suppose we came from the woods originally. But in some of nature’s forests, the adventurous traveler seems a feeble, unwelcome creature; wild beasts and the weather trying to kill him, the rank, tangled vegetation, armed with spears and stinging needles, barring his way and making life a hard struggle.”

If you’d like to read some of John Muir’s works and articles to see how he came to appreciate the beauty of nature, we suggest you read Wilderness Essays.