John Ernst Steinbeck Jr., generally known as John Steinbeck, was a notable American author. He has also been described as “a giant of American letters,” and several of his works are regarded as classics of Western literature.

Before he became a successful writer with numerous critically-acclaimed novels, he initially worked as a manual laborer working on nearby ranches and sugar beet farms. There he discovered the darker side of human nature and the harsh realities of the migrant life.

Despite everything else, his love for reading and writing continued to grow even more. Rather than being disheartened by his situation, he instead found inspiration by exploring his surroundings and using his spare time to write. He did not give up on his passion and eventually published his first novel titled “Cup of Gold” in 1929.

Steinbeck published a total of 27 books during his lifetime, including six non-fiction books, 16 novels, and two collections of short stories. His writings are mostly focused on themes of fate and injustice.

His novel “The Grapes of Wrath” (1939) won the 1962 Pulitzer Prize in Literature. It is also considered his masterpiece as well as a part of the American literary canon (highly valued works of art). His writings not only educated and informed the readers but also entertained them for being imaginative yet realistic at the same time.

Steinbeck is without a doubt, one of the most gifted writers in our history. We have listed some of the most notable John Steinbeck quotes and sayings that shows his thoughts and views on life, literature, writing, and more.

1. “It seems to me that if you or I must choose between two courses of thought or action, we should remember our dying and try so to live that our death brings no pleasure on the world.” 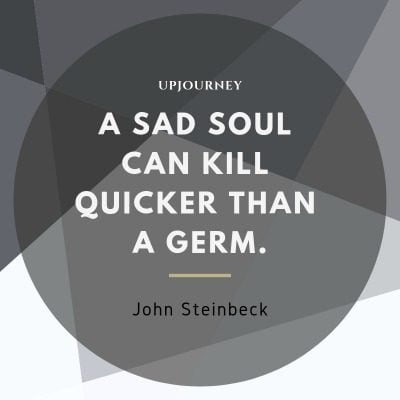 4. “Men do change, and change comes like a little wind that ruffles the curtains at dawn, and it comes like the stealthy perfume of wildflowers hidden in the grass.”

5. “A journey is a person in itself; no two are alike. And all plans, safeguards, policing, and coercion is fruitless. We find that after years of struggle that we do not take a trip; a trip takes us.”

6. “These words dropped into my childish mind as if you should accidentally drop a ring into a deep well. I did not think of them much at the time, but there came a day in my life when the ring was fished up out of the well, good as new.”

7. “We spend our time searching for security and hate it when we get it.”

1. “In utter loneliness, a writer tries to explain the inexplicable.”

2. “Time is the only critic without ambition.” 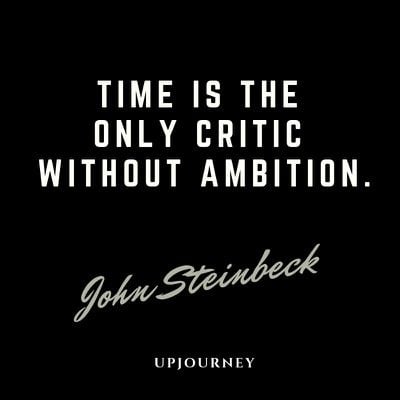 3. “Writers are a little below clowns and a little above trained seals.”

4. “Unless a reviewer has the courage to give you unqualified praise, I say ignore the bastard.”

5. “Ideas are like rabbits. You get a couple and learn how to handle them, and pretty soon you have a dozen.”

6. “I am impelled, not to squeak like a grateful and apologetic mouse, but to roar like a lion out of pride in my profession.”

7. “The writer must believe that what he is doing is the most important thing in the world. And he must hold to this illusion even when he knows it is not true.”

1. “I have come to believe that a great teacher is a great artist and that there are as few as there are any other great artists. Teaching might even be the greatest of the arts since the medium is the human mind and spirit.”

2. “I’ve seen a look in dogs’ eyes, a quickly vanishing look of amazed contempt, and I am convinced that basically, dogs think humans are nuts.”

3. “So in our pride, we ordered for breakfast an omelet, toast, and coffee and what has just arrived is a tomato salad with onions, a dish of pickles, a big slice of watermelon and two bottles of cream soda.”

4. “It has always been my private conviction that any man who puts his intelligence up against a fish and loses had it coming.”

5. “A journey is like marriage. The certain way to be wrong is to think you control it.”

6. “I hate cameras. They are so much more sure than I am about everything.”

7. “Where does discontent start? You are warm enough, but you shiver. You are fed, yet hunger gnaws you. You have been loved, but your yearning wanders in new fields. And to prod all these there’s time, the Bastard Time.”

8. “Man is the only kind of varmint sets his own trap, baits it, then steps in it.”

9. “Power does not corrupt. Fear corrupts… perhaps the fear of a loss of power.”

10. “One can find so many pains when the rain is falling.” 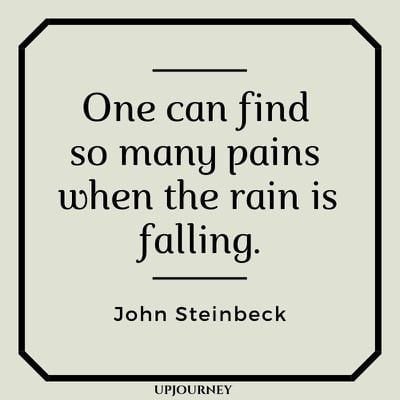 11. “It is a common experience that a problem difficult at night is resolved in the morning after the committee of sleep has worked on it.”

12. “I’ve lived in good climate, and it bores the hell out of me. I like the weather rather than climate.”

If you would like to learn more about the works of John Steinbeck, we would suggest you read his award-winning novel titled, “The Grapes of Wrath.”