Marion Mitchell Morrison, widely known as John Wayne and had the nickname “Duke,” was a famous American actor, filmmaker, and a recipient of the Presidential Medal of Freedom.

His role in the movie Stagecoach (1939) made him an instant mainstream star, and since then, Wayne collectively starred in 142 motion pictures, including the ones with his name above the title.

The movies he starred in include Red River in 1948, The Quiet Man in 1952, The Searchers in 1956, Rio Bravo in 1959, The Man Who Shot Liberty Valance in 1962, and True Grit in 1969 among many others. In his final screen performance, he portrayed an aging gunfighter battling cancer in the movie The Shootist in 1976. Wayne’s last public appearance was at the Academy Awards ceremony on the 9th of April 1979.

Here are some of the most notable John Wayne quotes and sayings that shows his thoughts and views about life, movies, acting, and many more.

1. “Nothing is so discouraging to an actor than to have to work for long hours upon hours in brightly lighted interior sets.”

2. “Nobody should come to the movies unless he believes in heroes.”

3. “I was ashamed to admit I was hipped to the idea of acting. That’s why I started in with the props.”

4. “All the screen cowboys behaved like real gentlemen. They didn’t drink, they didn’t smoke. When they knocked the bad guy down, they always stood with their fists up, waiting for the heavy to get back on his feet. I decided I was going to drag the bad guy to his feet and keep hitting him.”

5. “Real art is basic emotion. If a scene is handled with simplicity – and I don’t mean simple – it’ll be good, and the public will know it.”

6. “In westerns, you meet a hardy bunch of characters. There is no jealousy on such pictures.” 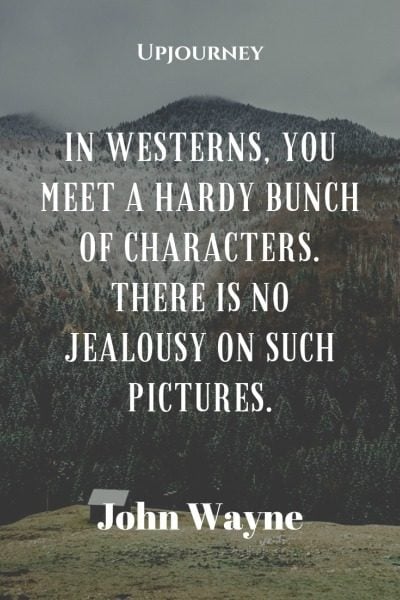 8. “My folks always let me go to the movies every Saturday. We were really motion-picture goers.”

2. “Tomorrow hopes we have learned something from yesterday.” 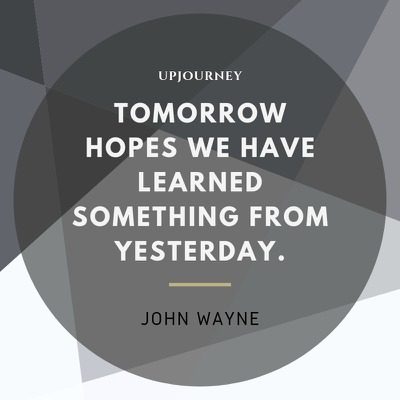 3. “Tomorrow is the most important thing in life. Comes into us at midnight very clean. It’s perfect when it arrives and it puts itself in our hands. It hopes we’ve learned something from yesterday.”

John Wayne Quotes About Self

1. “I’m not the sort to back away from a fight. I don’t believe in shrinking from anything. It’s not my speed; I’m a guy who meets adversities head-on.”

2. “I suppose my best attribute if you want to call it that, is sincerity. I can sell sincerity because that’s the way I am.” 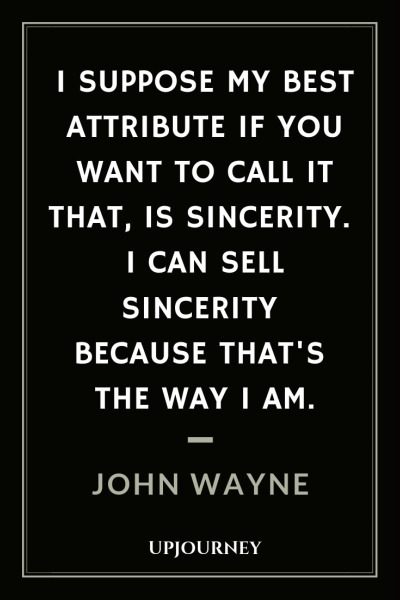 4. “I never have really become accustomed to the ‘John.’ Nobody ever really calls me John… I’ve always been Duke or Marion or John Wayne. It’s a name that goes well together, and it’s like one word – John Wayne.”

1. “I’d read up on the history of our country and I’d become fascinated with the story of the Alamo. To me, it represented the fight for freedom, not just in America, but in all countries.”

2. “I never have really become accustomed to the ‘John.’ Nobody ever really calls me John… I’ve always been Duke or Marion or John Wayne. It’s a name that goes well together, and it’s like one word – John Wayne.”

4. “Courage is being scared to death… and saddling up anyway.” 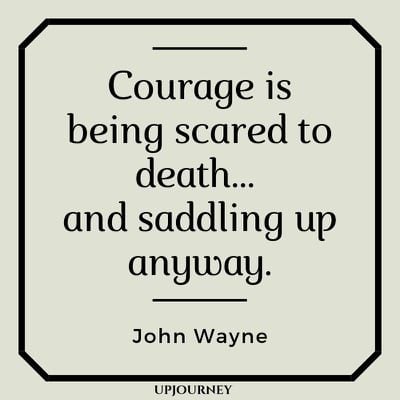 5. “All I’m for is the liberty of the individual.”

6. “Everybody that I was in school with had an uncle or father in the law, and I started to realize that I was going to end up writing briefs for about ten years for these fellows who I thought I was smarter than. And I was kind of losing my feeling for that.”

8. “Get off your horse and drink your milk.”

9. “Get off your butt and join the Marines!”

10. “I don’t feel we did wrong in taking this great country away from them. There were great numbers of people who needed new land, and the Indians were selfishly trying to keep it for themselves.”

11. “When I was a sophomore at USC, I was a socialist, pretty much to the left. But not when I left university. I quickly got wise. I’d read about what had happened to Russia in 1917 when the Communists took over.”

If you would like to know more about the works and life story of John Wayne, we would suggest you read John Wayne: The Life and Legend by Scott Eyman.