Joseph John Campbell was a prolific professor of Literature at Sarah Lawrence College and a brilliant author who worked in comparative mythology and religion.

Campbell saw similarities between myths and beliefs from various kinds of literature and cultures and thought that it couldn’t be just a coincidence. His work embraces many aspects of the human experience, and his most well-known book is titled “The Hero with a Thousand Faces” which was published in 1949.

Since the release of The Hero with a Thousand Faces, Campbell’s theory has been implemented by a wide variety of modern artists and writers including the famous Filmmaker George Lucas who said that Campbell’s work inspired the Star Wars films. In 2011, the book was listed on Time’s 100 best and most influential books written in English.

Here are some of the most notable Joseph Campbell quotes and sayings that shows his thoughts and views regarding life and a whole lot more.

1. “Follow your bliss and the universe will open doors where there were only walls.”

2. “Your life is the fruit of your own doing. You have no one to blame but yourself.”

3. “The privilege of a lifetime is being who you are.” 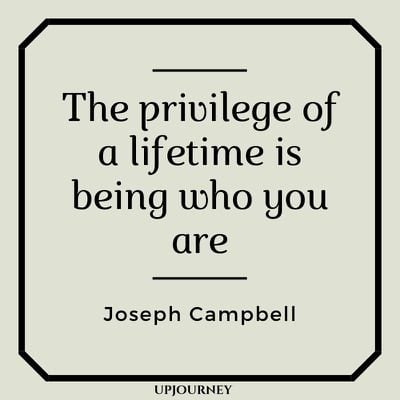 4. “What each must seek in his life never was on land or sea. It is something out of his own unique potentiality for experience, something that never has been and never could have been experienced by anyone else.”

5. “We must let go of the life we have planned, so as to accept the one that is waiting for us.”

6. “It is by going down into the abyss that we recover the treasures of life. Where you stumble, there lies your treasure.”

7. “We’re so engaged in doing things to achieve purposes of outer value that we forget the inner value, the rapture that is associated with being alive, is what it is all about.”

9. “The goal of life is to make your heartbeat match the beat of the universe, to match your nature with Nature.”

10. “One way or another, we all have to find what best fosters the flowering of our humanity in this contemporary life, and dedicate ourselves to that.”

11. “Participate joyfully in the sorrows of the world. We cannot cure the world of sorrows, but we can choose to live in joy.”

12. “Opportunities to find deeper powers within ourselves come when life seems most challenging.”

1. “A hero is someone who has given his or her life to something bigger than oneself.” 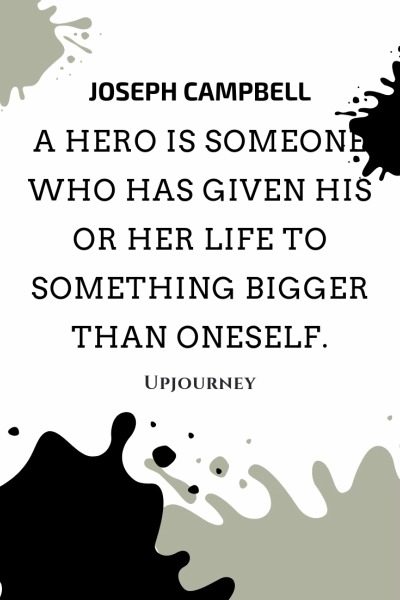 2. “When we quit thinking primarily about ourselves and our own self-preservation, we undergo a truly heroic transformation of consciousness.”

3. “The big question is whether you are going to be able to say a hearty yes to your adventure.”

1. “God is a metaphor for that which transcends all levels of intellectual thought. It’s as simple as that.”

2. “Every religion is true one way or another. It is true when understood metaphorically. But when it gets stuck in its own metaphors, interpreting them as facts, then you are in trouble.”

3. “Your sacred space is where you can find yourself again and again.” 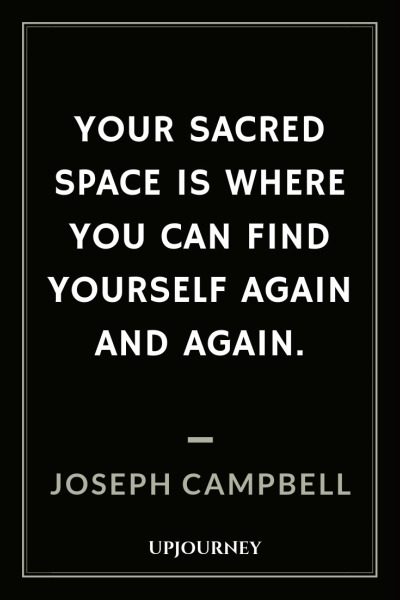 2. “Is the system going to flatten you out and deny you your humanity, or are you going to be able to make use of the system to the attainment of human purposes?”

3. “Find a place inside where there’s joy, and the joy will burn out the pain.” 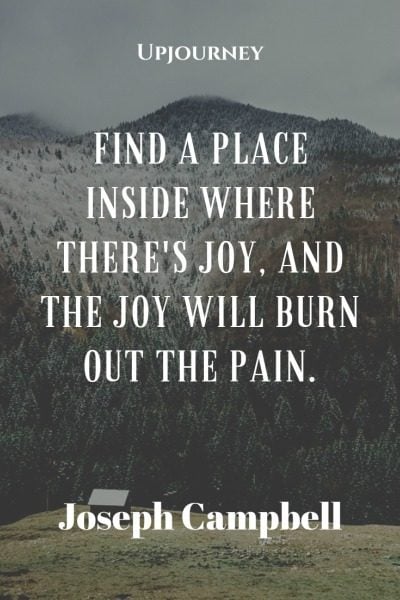 5. “I think the person who takes a job in order to live – that is to say, for the money – has turned himself into a slave.”

6. “When you make the sacrifice in marriage, you’re sacrificing not to each other but to unity in a relationship.”

7. “When people get married because they think it’s a long-time love affair, they’ll be divorced very soon, because all love affairs end in disappointment. But marriage is a recognition of a spiritual identity.”

If you would like to learn more about the writings of Joseph Campbell, we would suggest you read The Hero with a Thousand Faces.