Anyone who has studied World History has heard of Julius Caesar at some point. Considered as one of the greatest rulers in all of history, Caesar was a populist Roman dictator, military general, politician, and great orator. Throughout his political and military career, Caesar played a prominent role in the events which led to the fall of the Roman Republic and, the rise of the Roman Empire.

Born on either 12 or 13th of July 100 B.C., Caesar was the son of Gaius Julius Caesar and Aurelia Cotta. They were from a political family, but not particularly from an influential one. No knows what kind of childhood Caesar had precisely, but he did receive proper education where he read texts of Greek philosophers.

Caesar was 16 when his father died during a civil war, making him the head of the family. Not long after, his mother perished as well. Because of his familial ties to the enemy of the dictator, Sulla, Caesar was exiled and joined the Roman Army. 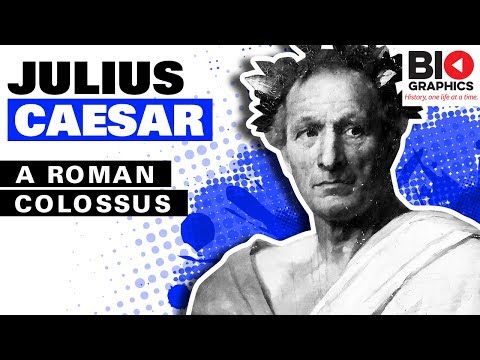 Upon hearing of Sulla’s death in 78 BC, Caesar returned to Rome. However, across the Aegean Sea, he was kidnapped by pirates. His kidnappers demanded 20,000 silver talents, but an offended Caesar convinced the pirates to ask for 50,000 instead. Once the ransom was paid, Caesar pursued his kidnappers and had them imprisoned and eventually, executed.

Years of military triumphs led Caesar to become one of the wealthiest men in Rome. In these years, he had put many uprisings to a stop and prevented civil wars from happening. He even sought to expand the Roman territory to Brittania and Spain.

However, Caesar’s expanding military power and popularity to the Roman masses led for the other Roman senators to fear the return of a monarchy and conspire Caesar’s assassination. Among them were Brutus and Cassius. On the Ides of March of 44 BC, Caesar appeared at a Senate session where he was stabbed 23 times and died.

His death brought the Roman public to an uproar, causing a mob to attack Brutus and Cassius’s homes. Soon after Caesar’s death, the Roman Senate granted him the title Divus Iulius. Two thousand years after his death, Julius Caesar is still revered by many.

Find your inner ruler and expand your empire as you read the best and famous Julius Caesar quotes and sayings. 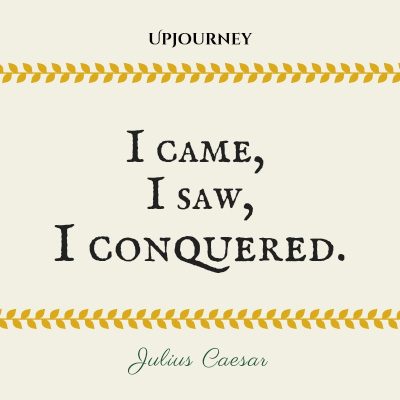 2. “It is easier to find men who will volunteer to die, than to find those who are willing to endure pain with patience.”

3. “I have always reckoned the dignity of the republic of first importance and preferable to life.”

4. “Men freely believe that which they desire.”

5. “In war, events of importance are the result of trivial causes.”

7. “What we wish, we readily believe, and what we ourselves think, we imagine others think also.”

8. “If you must break the law, do it to seize power: in all other cases observe it.”

9. “No one is so brave that he is not disturbed by something unexpected.”

10. “It is not these well-fed long-haired men that I fear, but the pale and the hungry-looking.”

11. “Experience is the teacher of all things.” 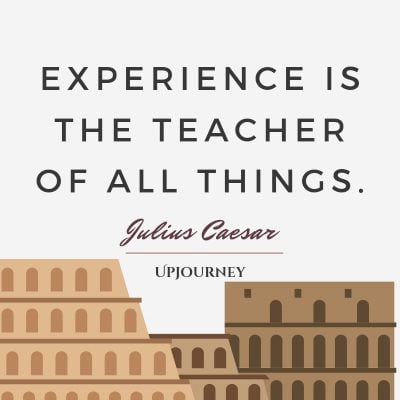 12. “Which death is preferably to every other? ‘The unexpected.'”

14. “Cowards die many times before their actual deaths.”

15. “Fortune, which has a great deal of power in other matters but especially in war, can bring about great changes in a situation through very slight forces.”

17. “Caesar’s wife must be above suspicion.”

18. “I have lived long enough to satisfy both nature and glory.”

19. “It was the wont of the immortal gods sometimes to grant prosperity and long impunity to men whose crimes they were minded to punish in order that a complete reverse of fortune might make them suffer more bitterly.”

20. “The evil that men do lives after them; The good is oft interred with their bones.”

21. “It is better to create than to learn! Creating is the essence of life.” 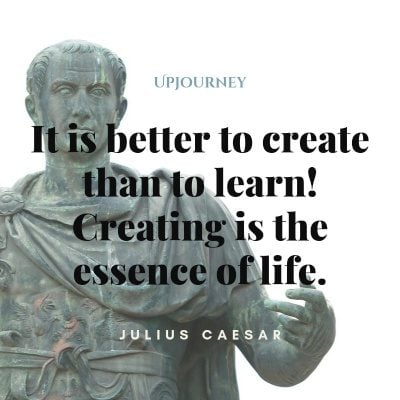 22. “I have lived long enough both in years and in accomplishments.”

23. “Men in general are quick to believe that which they wish to be true.”

24. “I had rather be first in a village than second at Rome.”

25. “Bid me run, and I will strive with things impossible.”

26. “It is not the well-fed long-haired man I fear, but the pale and the hungry looking.”

27. “Let us go where the gods have shown us the way and the injustice of our enemies calls us.”

29. “It is the right of war for conquerors to treat those whom they have conquered according to their pleasure.”

30. “Bid me run, and I will strive with things impossible.”

31. “In the end, it is impossible not to become what others believe you are.”

32. “He conquers twice, who shows mercy to the conquered.”

33. “The greatest enemy will hide in the last place you would ever look.”

34. “The difference between a republic and an empire is the loyalty of one’s army.”

35. “If I fail it is only because I have too much pride and ambition.”

36. “It is not the well-fed long-haired man I fear, but the pale and the hungry looking.”

38. “It is better to suffer once than to be in perpetual apprehension.”

If you’d like to know more about Julius Caesar and the Roman Empire, we recommend that you read his biography Caesar by Adrian Goldsworthy.