Her style of music has been noted by fans and critics alike for its stylized cinematic quality with themes that reflects glamour, tragic romance, loss, heartbreak, and melancholia among many others.

Lana Del Rey’s works received a lot of recognition, and many of her songs made it to Billboard Hot 100 and the US Billboard 200. She also has been nominated for the Grammy Award for ‘Best Pop Vocal Album’ for both her albums titled Lust for Life and Paradise.

She is very interested in the deeper meaning of things which interprets in her songs. We have listed the top 23 Lana Del Rey quotes that shows her views about music, life, and so much more.

1. “I didn’t live at school, I lived where I could and studied what I enjoyed studying. I took what I wanted from that education but was making my first record at the same time. I don’t know anyone from school. I was just leading a different life. I was really interested in writing and other things.”

2. “Feeling like you’re respected among the people who do the same thing you do is incredible and necessary.”

3.” I don’t believe in the school of hard knocks, although I’ve had them. All that stuff about whatever doesn’t kill you makes you stronger is so not true. Do you know what makes you stronger? When people treat you and your art with dignity.”

4. “I have a personal ambition to live my life honestly and honor the true love that I’ve had and also the people I’ve had around me.”

5. “When I was very young I was sort of floored by the fact that my mother and my father and everyone I knew was going to die one day, and myself too. I had a sort of a philosophical crisis. I couldn’t believe that we were mortal.”

6. “There’s a backlash about everything I do.” 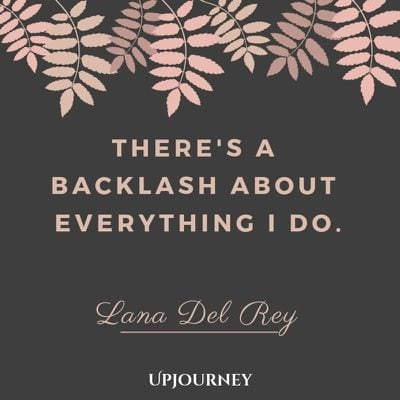 7. “When I found somebody who I fell in love with, it made me feel different than I felt the rest of the day. It was electrifying. That’s what inspired the ‘Off to the Races’ melodies. That’s one of the times when you’re feeling electrified by someone else and they make you happy to be alive.”

1. “I wanted a name I could shape the music towards.”

2. “If you consider the definition of authenticity, it’s saying something and actually doing it. I write my own songs. I made my own videos. I pick my producers. Nothing goes out without my permission. It’s all authentic.”

4. “I’m a writer first and a singer second. And then I started editing my own videos when I was 17, so it’s a process I’ve been doing since I was younger.”

5. “I was always singing but didn’t plan on pursuing it seriously. When I got to New York City when I was 18, I started playing in clubs in Brooklyn – I have good friends and devoted fans on the underground scene, but we were playing for each other at that point – and that was it.”

7. “If you are born an artist, you have no choice but to fight to stay an artist.” 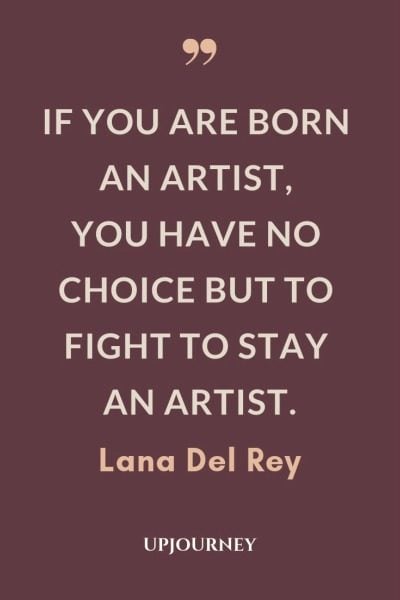 8. “I’ve been writing since I was really young, so I considered myself a writer for a really long time.”

9. “A lot of the time when I write about the person that I love, I feel like I’m writing about New York.”

10. “I knew I wanted to do something creative. I didn’t think I’d have the luxury of doing something like that, because I didn’t know anyone who had pursued anything they really adored, but I had dreams for singing or writing.”

1. “Seeing myself on the screen makes me cringe. I understand that I am that way – pouty.”

2. “Fashion is inspired by youth and nostalgia and draws inspiration from the best of the past.”

3. “When I walk outside, people have something to say about it.” 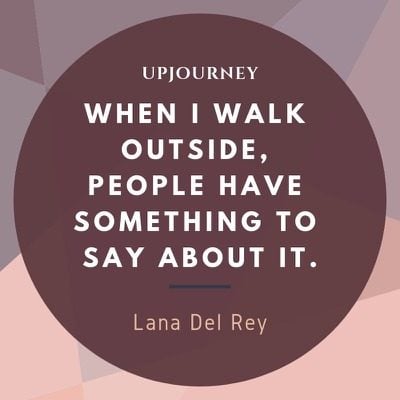 4. “I used to like to set different film clips to classical music, not even my own songs, but make little movies.”

5. “I was going to Miami quite a lot at the time, speaking a lot of Spanish with my friends from Cuba – Lana Del Rey reminded us of the glamour of the seaside. It sounded gorgeous coming off the tip of the tongue.”

6. “I’ve been reading tabloids since I was nine. I love a good story.”

We hope you enjoyed this collection of quotes by the superstar Lana Del Rey. If you would like to learn more about her songs, we would suggest you check out Lana Del Rey – Born to Die: The Paradise Edition.