It’s no doubt that LeBron Raymone James Sr. is one of the NBA legends. He has earned international fame for his incredible and indisputable talent in playing professional basketball.

Aside from having talent, his abilities, intelligence, and hard work took him to the top of the game and kept him there. In fact, some people even regard him as the greatest player of all time.

Some of his achievements include four NBA MVP, three NBA Finals MVP, three NBA All-Star MVP, and two Olympic gold medals. He is an exceptional player who never forgot the hard times he went through but instead used them as an inspiration for reaching his full potential.

Although his public life has been the subject of much scrutiny both by critics and fans alike, he is still ranked as one of America’s most influential athletes. He has been featured in countless documentaries, books, and of course, television commercials.

Here are 57 LeBron James quotes and sayings to motivate you about greatness, family, and being the best version of yourself.

1. “I don’t know how tall I am or how much I weigh. Because I don’t want anybody to know my identity. I’m like a superhero. Call me Basketball Man.”

3. “To all the positions, I just bring the determination to win. Me being an unselfish player, I think that can carry on to my teammates. When you have one of the best players on the court being unselfish, I think that transfers to the other players.”

4. “When you have that respect from your teammates, it makes it a lot more comfortable.” 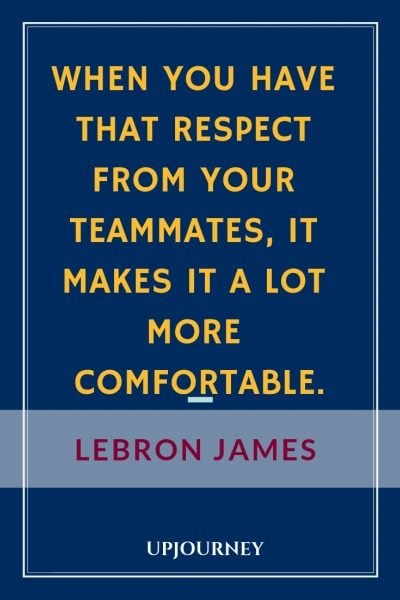 7. “Well, I mean, to me, I think my ultimate – my ultimate goal is winning championships and – and I understand that me going down as one of the greats will not happen until I, you know, win a championship.”

9. “When did I know I had talent? I think it started when I first started playing sports, organized sports.”

10. “Your teammates give you confidence. They give me the confidence all year, all postseason.”

11. “There are some teams and logos you see, no matter where you are in the world, and you know exactly who they are and what they mean.”

13. “I treated it like every day was my last day with a basketball.” 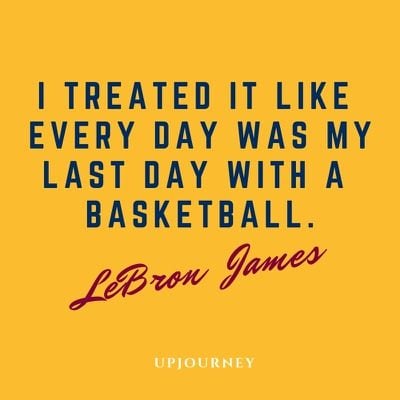 14. “I’ve always been an unselfish guy, and that’s the only way I know how to play on the court and I try to play to the maximum of my ability – not only for myself but for my teammates.”

15. “Maybe the ones burning my jersey were never LeBron fans anyway.”

18. “But sports carried me away from being in a gang or being associated with drugs. Sports was my way out.”

19. “I’m not going to fight because I mean too much to our team, and I can’t afford to be suspended for a game or do something stupid to get me kicked out of a playoff game.”

20. “Sometimes in the past when I played something might make me lose focus, or I would go home after a game where I thought I could have played better and I would let it hang over my head for a long time when it shouldn’t.”

21. “I hate letting my teammates down. I know I’m not going to make every shot. Sometimes I try to make the right play, and if it results in a loss, I feel awful. I don’t feel awful because I have to answer questions about it. I feel awful in that locker room because I could have done something more to help my teammates win.”

2. “You have to be able to accept failure to get better.” 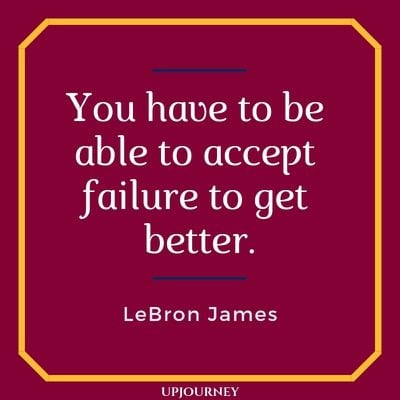 3. “Warren Buffet told me once and he said always follow your gut. When you have that gut feeling, you have to go with don’t go back on it.”

4. “You can’t be afraid to fail. It’s the only way you succeed – you’re not gonna succeed all the time, and I know that.”

5. “As a kid, we would drive up and down 77 North – that’s our highway – there would be office buildings on the side of the highway and I’d be like, that’s what my house is going to look like when I get older. I’m going to start making my house look like this.”

6. “I played football for a team called the East Dragons on the east side of town. We only had six regular season games. And six games I played tailback and I had 18 touchdowns in six games. That’s when I knew I had some athletic ability.”

7. “I think, team first. It allows me to succeed, it allows my team to succeed.”

9. “I’m going to use all my tools, my God-given ability, and make the best life I can with it.” 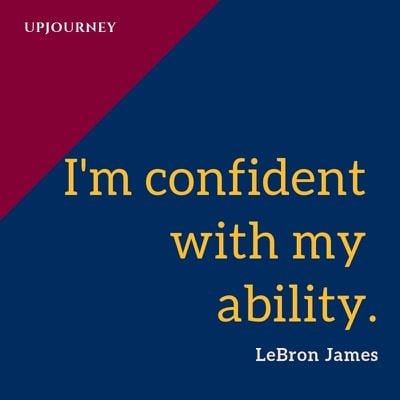 11. “As a professional athlete a lot is going to be said about you – but I just try to move forward and try to achieve my goals.”

1. “For me, already being part of a single parent household and knowing it was just me and my mom, you’d wake up times and hope that the next day you’d be able to be alongside your mother because she was out trying to make sure that I was taken care of. But all I cared about was her being home.”

2. “Being the only man in the household with my mom definitely helped me grow up fast.”

3. “When I was 5, some financial things happened, and I moved seven times in a year. We moved from apartment to apartment, sometimes living with friends. My mom would always say, Don’t get comfortable, because we may not be here long.”

4. “My mom and I have always been there for each other. We had some tough times, but she was always there for me.” 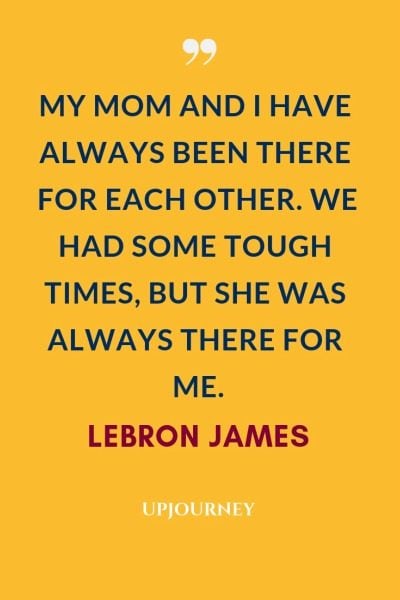 5. “Basketball is my passion, I love it. But my family and friends mean everything to me. That’s what’s important. I need my phone so I can keep in contact with them at all times.”

6. “You know, my family and friends have never been yes-men: ‘Yes, you’re doing the right thing, you’re always right.’ No, they tell me when I’m wrong, and that’s why I’ve been able to stay who I am and stay humble.”

7. “My father wasn’t around when I was a kid, and I used to always say, ‘Why me? Why don’t I have a father? Why isn’t he around? Why did he leave my mother?’ But as I got older I looked deeper and thought, I don’t know what my father was going through, but if he was around all the time, would I be who I am today?”

8. “But now, being a parent, I go home and see my son and I forget about any mistake I ever made or the reason I’m upset. I get home and my son is smiling or he comes running to me. It has just made me grow as an individual and grow as a man.”

9. “I hear my friends and my mom tell me I’m special, but honestly, I still don’t get it.”

1. “I need music. It’s like my heartbeat, so to speak. It keeps me going no matter what’s going on – bad games, press, whatever!”

2. “I laugh and joke, but I don’t get distracted very easily.”

3. “When you work out or you’re doing anything active, it’s more fun as a group. You may lose track of the time, and the next thing you know, you’re working out for two hours because you’re having fun.”

4. “The first time I stepped on an NBA court I became a businessman.” 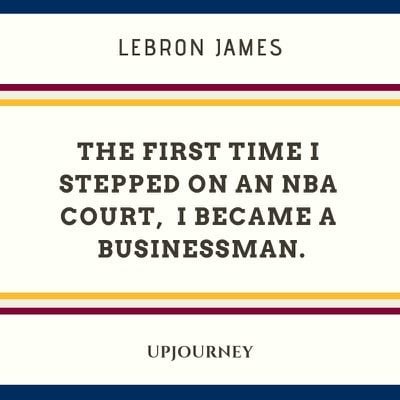 5. “Where I grew up – I grew up on the north side of Akron, lived in the projects. So those scared and lonely nights – that’s every night. You hear a lot of police sirens, you hear a lot of gunfire. Things that you don’t want your kids to hear growing up.”

8. “I’m a pretty funny guy, and I would love to do a comedy with a bunch of funny guys – movie-star guys, where they could help me through it.”

9. “If a great opportunity opens itself up, I would love to be involved… or star in a movie.”

10. “Volleyball, I could be pretty good. After a few practices, I could be that striker, or whatever they call it.” 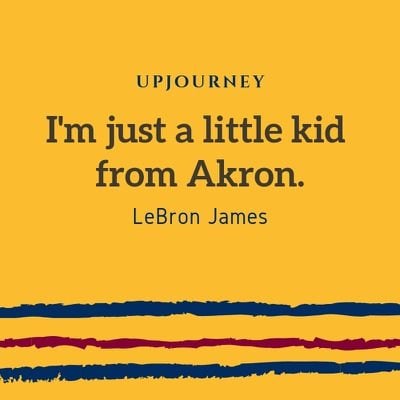 If you want to learn more about the life story of LeBron James, we would suggest you read LeBron James: The Inspiring Story of One of Basketball’s Greatest Players by Clayton Geoffreys.