Leonardo da Vinci was the epitome of a Renaissance man. Da Vinci was an Italian polymath during the Italian Renaissance. His fields of interests include painting, drawing, sculpture, invention, architecture, music, science, mathematics, cartography, geology, astronomy, and many more. 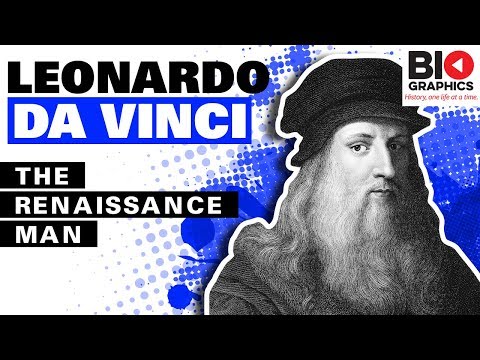 Born in April 1452, Da Vinci was born out of wedlock as the son of a wealthy notary and a woman named Caterina. In his youth, the Florentine painter Andrea del Verrocchio accepted Da Vinci to be part of his guild as an apprentice.

Da Vinci’s reputation as a talented painter brought him to work in Rome, Bologna, and Venice. Many members of the Italian royalty and political figures. At one point, Da Vinci and Michaelangelo even became rivals.

In the final years of his life, Da Vinci lived in a chateau in France owned by the King of France, Francis I.

Some of his most famous works are the Mona Lisa, The Last Supper, Virgin of the Rocks, Lady with an Ermine, and The Vitruvian Man. Many consider him as one of the greatest painters of all time and revere the quality of his works.

Be amazed by the exceptional mind of this artist through some of the most popular Leonardo da Vinci quotes and sayings that demonstrate his views on life, art, learning, nature, and many more.

1. “Life is pretty simple: You do some stuff. Most fails. Some works. You do more of what works. If it works big, others quickly copy it. Then you do something else. The trick is the doing something else.” 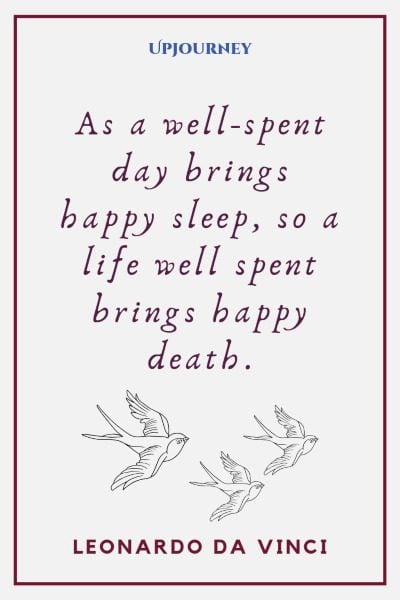 6. “Man and animals are in reality vehicles and conduits of food, tombs of animals, hostels of Death, coverings that consume, deriving life by the death of others.”

7. “Experience does not err. Only your judgments err by expecting from her what is not in her power.”

1. “Art is never finished, only abandoned.”

2. “The human foot is a masterpiece of engineering and a work of art.”

3. “Painting is concerned with all the 10 attributes of sight; which are: Darkness, Light, Solidity and Color, Form and Position, Distance and Propinquity, Motion and Rest.”

4. “The painter who draws merely by practice and by eye, without any reason, is like a mirror which copies every thing placed in front of it without being conscious of their existence.”

5. “Where the spirit does not work with the hand, there is no art.”

6. “A beautiful body perishes, but a work of art dies not.” 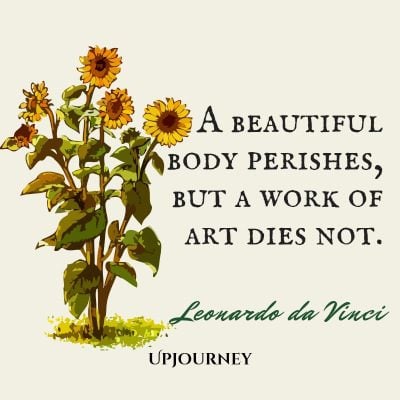 2. “Where there is shouting, there is no true knowledge.”

3. “He who loves practice without theory is like the sailor who boards ship without a rudder and compass and never knows where he may cast.”

4. “The noblest pleasure is the joy of understanding.”

6. “All our knowledge has its origins in our perceptions.”

7. “The truth of things is the chief nutriment of superior intellects.” 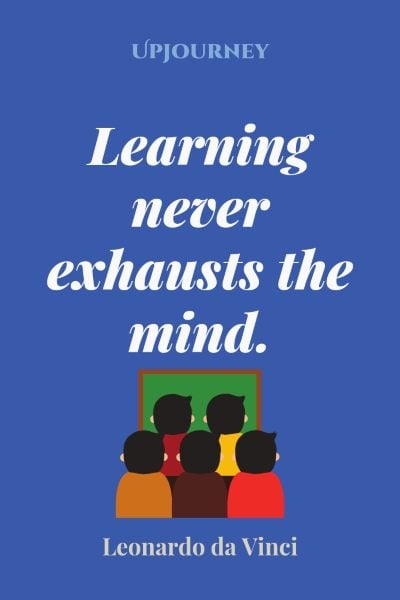 10. “Knowledge of the past and of the places of the earth is the ornament and food of the mind of man.”

2. “For once you have tasted flight you will walk the earth with your eyes turned skywards, for there you have been and there you will long to return.”

3. “Although nature commences with reason and ends in experience it is necessary for us to do the opposite, that is to commence with experience and from this to proceed to investigate the reason.”

4. “Human subtlety will never devise an invention more beautiful, more simple or more direct than does nature because in her inventions nothing is lacking, and nothing is superfluous.”

5. “In rivers, the water that you touch is the last of what has passed and the first of that which comes; so with present time.”

6. “Water is the driving force of all nature.”

7. “Iron rusts from disuse; water loses its purity from stagnation… even so does inaction sap the vigor of the mind.”

8. “The senses are of the earth, the reason stands apart from them in contemplation.”

9. “Nature never breaks her own laws.” 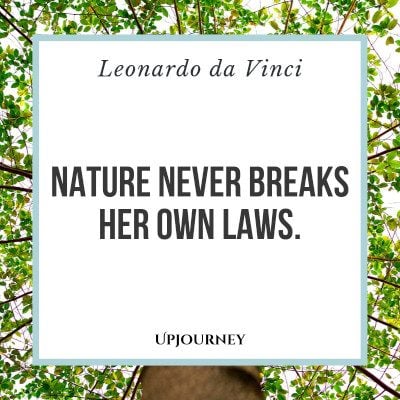 1. “Anyone who conducts an argument by appealing to authority is not using his intelligence; he is just using his memory.”

2. “The length of a man’s outspread arms is equal to his height.”

4. “It’s easier to resist at the beginning than at the end.”

5. “As every divided kingdom falls, so every mind divided between many studies confounds and saps itself.”

6. “There are four Powers: memory and intellect, desire and covetousness. The two first are mental and the others sensual. The three senses: sight, hearing and smell cannot well be prevented; touch and taste not at all.”

8. “Tears come from the heart and not from the brain.”

9. “Time abides long enough for those who make use of it.”

10. “Every action needs to be prompted by a motive.” 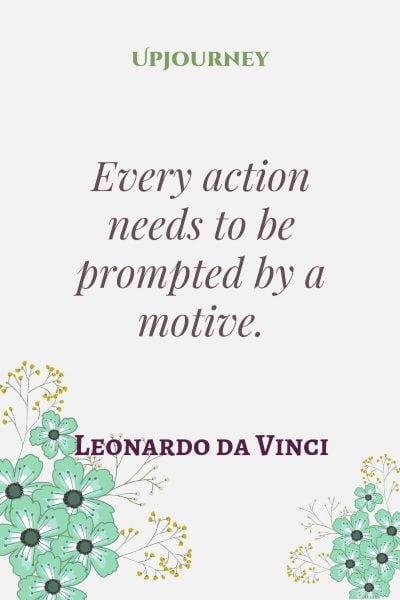 11. “I have offended God and mankind because my work didn’t reach the quality it should have.”

12. “The smallest feline is a masterpiece.”

13. “I have found that, in the composition of the human body as compared with the bodies of animals, the organs of sense are duller and coarser. Thus, it is composed of less ingenious instruments, and of spaces less capacious for receiving the faculties of sense.”

14. “There is no object so large but that at a great distance from the eye it does not appear smaller than a smaller object near.”

15. “The Medici created and destroyed me.”

17. “Just as food eaten without appetite is a tedious nourishment, so does study without zeal damage the memory by not assimilating what it absorbs.”

18. “It seems that it had been destined before that I should occupy myself so thoroughly with the vulture, for it comes to my mind as a very early memory, when I was still in the cradle, a vulture came down to me, he opened my mouth with his tail and struck me a few times with his tail against my lips.”

20. “Why does the eye see a thing more clearly in dreams than the imagination when awake?” 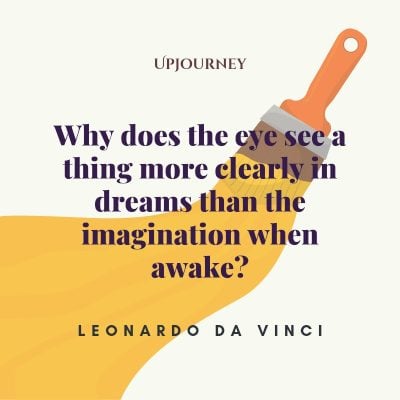 21. “You can have no dominion greater or less than that over yourself.”

22. “Nothing strengthens authority so much as silence.”

23. “Marriage is like putting your hand into a bag of snakes in the hope of pulling out an eel.”

24. “You do ill if you praise, but worse if you censure, what you do not understand.”

25. “Medicine is the restoration of discordant elements; sickness is the discord of the elements infused into the living body.”

26. “The greatest deception men suffer is from their own opinions.”

29. “It had long since come to my attention that people of accomplishment rarely sat back and let things happen to them. They went out and happened to things.”

30. “The human bird shall take his first flight, filling the world with amazement, all writings with his fame, and bringing eternal glory to the nest whence he sprang.” 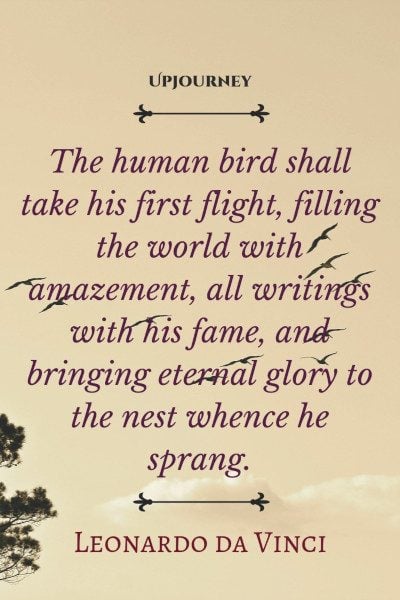 31. “The function of muscle is to pull and not to push, except in the case of the genitals and the tongue.”

32. “I love those who can smile in trouble, who can gather strength from distress, and grow brave by reflection. ‘Tis the business of little minds to shrink, but they whose heart is firm, and whose conscience approves their conduct, will pursue their principles unto death.”

33. “The beginnings and ends of shadow lie between the light and darkness and may be infinitely diminished and infinitely increased. Shadow is the means by which bodies display their form. The forms of bodies could not be understood in detail but for shadow.”

34. “Common Sense is that which judges the things given to it by other senses.”

36. “Beyond a doubt truth bears the same relation to falsehood as light to darkness.”

37. “Many are they who have a taste and love for drawing, but no talent; and this will be discernible in boys who are not diligent and never finish their drawings with shading.”

38. “Men of lofty genius when they are doing the least work are most active.”

39. “Simplicity is the ultimate sophistication.” 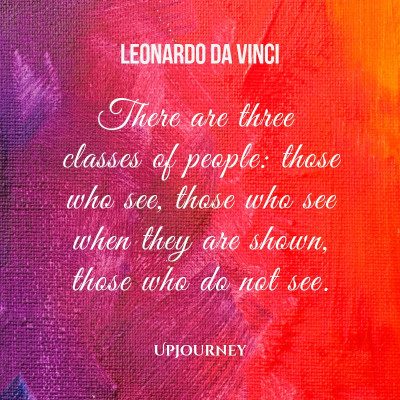 41. “Poor is the pupil who does not surpass his master.”

42. “I have always felt it is my destiny to build a machine that would allow man to fly.”

43. “Weight, force and casual impulse, together with resistance, are the four external powers in which all the visible actions of mortals have their being and their end.”

If you’d like to see the paintings and drawings of Leonardo da Vinci in your own home, we recommend you check out Leonardo. The Complete Paintings and Drawings by Frank Zöllner and Johannes Nathan.